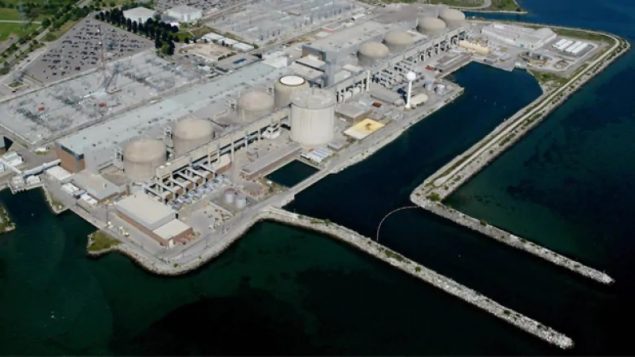 A warning message sent early Sunday worried vast numbers of Ontario residents. The Pickering nuclear plant has been in operation since 1971, but had been scheduled to be decommissioned this year but the past and current provincial governments wanted it kept open until 2024, Decommissioning is set for 2028 (Kevin Frayer-Canadian Press)

It was early on a sleepy Sunday morning when mobile phones, radios, and TV began sending an urgent alarm at 07;30

The alarming province-wide message said something had gone wrong at the Pickering Nuclear power plant located on the shore of Lake Ontario, east of Toronto.

The Greater Toronto Area is the most populous region in the country. 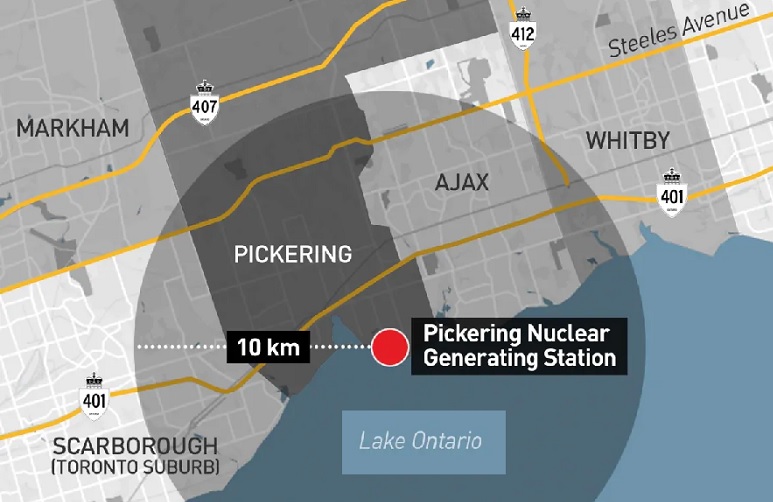 The ten kilometre radius covered by the alert. The Pickering plant is located in the most densely populated region of Canada in the GTA, just east of Toronto (CBC)

For almost two hours, people in the region were deeply concerned and worried. The message was of special concern to those in a 10 km radius from the plant. 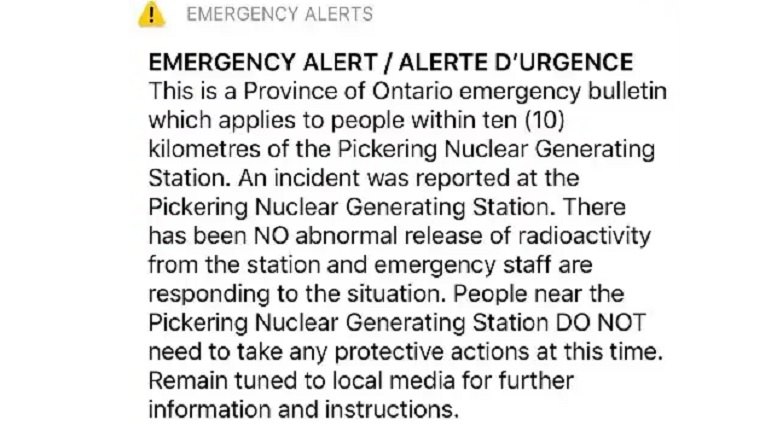 A rather unnerving message on mobile phones early Sunday morning for those living near the Pickering Nuclear plant. (CBC)

Then came word that the alert was a mistake. There had been a routine training exercise conducted by the Provincial Emergency Operations Centre (PEOC) but there was no incident, no danger, and the alert was sent out by mistake.

While the alert stated there was no radiation leak and people need not take protective action “at this time”, it was still highly unnerving.

Some remain skeptical about the announcement of a mistake, wondering if something did in fact happen, as a training alert starts with the words, “This is a test alert” which the Sunday message did not. They also note that early Sunday morning seems a strange time for a training exercise.

It was almost two hours later that a second notice came saying the first was a mistake.. (CBC)

Ontario Solicitor-General Sylvia Jones said in an interview.  “At one of those tests this morning, instead of it going out on the test side, it went out live to the people of Ontario, and for that I sincerely apologize,” she said. “It should not have happened, which is why I have asked the chief of Emergency Management Ontario, Doug Brown, to launch a full investigation’, adding, “There was no incident at the Pickering Nuclear Generating Station that should have triggered public notification. Nor was there ever any danger to the public or environment,”

She said the results will be made public.