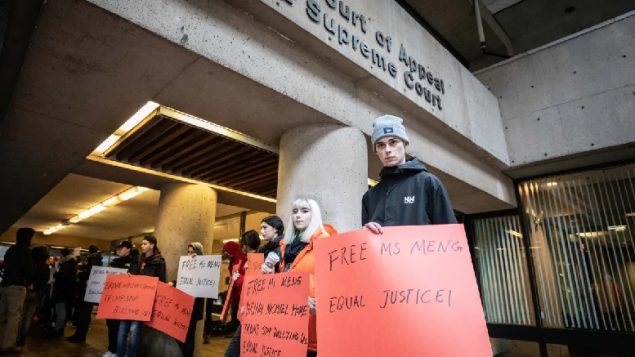 A group of pro-Meng Wanzhou demonstrators at her B.C Supreme Court hearing yesterday. Several say they were promised pay to hold up the signs, and really knew nothing about the case. The signs all appear to be created by the same person as well (Maggid MacPherson- CBC)

There have sometimes been questions about the authenticity of pro-China demonstrators at relevant events in Canada and whether they may actually be demonstrating on the basis of their own convictions.

This suggestion has been reinforced by events at yesterday’s hearings in Vancouver into the U.S. extradition request for top Huawei executive Meng Wanzhou.

Some of the demonstrators holding pro-Meng signs now say they were offered pay to hold the signs as reporters from various world agencies attended the hearings.

At least one person thought she had been hired as an extra for a movie shoot, and left without being paid once she realised it was a real event and not a movie shoot. A young man said he was offered $100 to be in what he thought was a music video. Another said she was offered $150 to hold the sign adding she had no idea who Meng Wanzhou was, or even the name Huawei and only looked it up later. Another asked by reporters said it was about ‘equal justice” but didn’t know anything about the case.

So far it seems no-one has been able to determine exactly who was behind the staged protest.