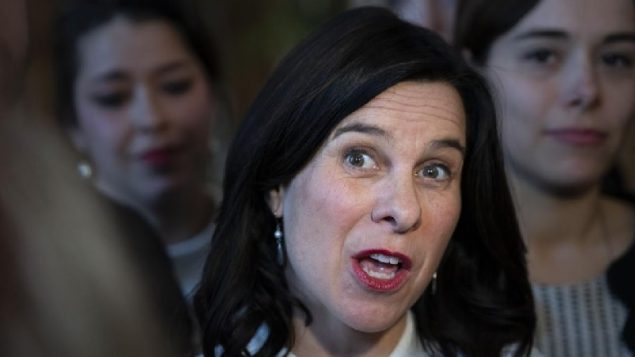 File Photo Montreal Mayor, Valerie Plante announced at a news conference, that it will be exercising its rights of first refusal to buy properties. (Paul Chiasson/CP)

Montreal Mayor, Valerie Plante wants to ban all plastic shopping bags by the end of 2020.

She plans on modifying the current bylaw which already bans thin plastic bags from being used by retailers.

In a tweet, Plante said that her administration wants to modify the bylaw to ban plastic bags in retail shops as soon as possible.

The ban on thin plastic bags, which defined as bags that measured less than 0.05 millimeters, was adopted in 2016 and put into effect on Jan. 1, 2018.

Retailers were then given a five month grace period before the city began issuing fines for those who continued giving out thin plastic bags.

According to the city the same fines would apply to the new potential ban on all plastic bags.

In the past Plante said that she wants to explore the options to ban single use plastics and Styrofoam food containers.

Canada’s federal government is also looking to ban all single use plastics, but there have been some criticisms of their process.

With files from CBC and The Canadian Press