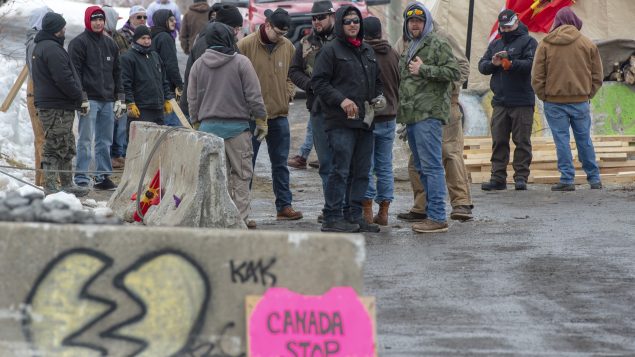 Members of the Mohawk community stand near the entrance to the blockade of the CN commuter rail line Wednesday, in Kahnawake, south of Montreal. They say they have no plans to stand down, despite an injunction to clear the tracks. (Ryan Remiorz/The Canadian Press)

Indigenous protests and blockades don’t appear to be going away

As Mohawks near Montreal reinforced their concrete barriers and members of another band in central Ontario set tires on fire to disrupt rail service, a new public opinion poll suggests that support for the First Nations protesters is slipping.

The protesters are backing Wet’suwet’en hereditary chiefs fighting to prevent the construction of the Coastal GasLink pipeline through their territory in northern British Columbia.

But it appears more and more Canadians are losing patience.

An Ipsos survey published Tuesday found that that 60 per cent of respondents were not in favour of the protests.

That’s up 11 points from last week.

The survey also found support for the protests fell five points, to 27 per cent.

About 13 per cent said they were unsure. 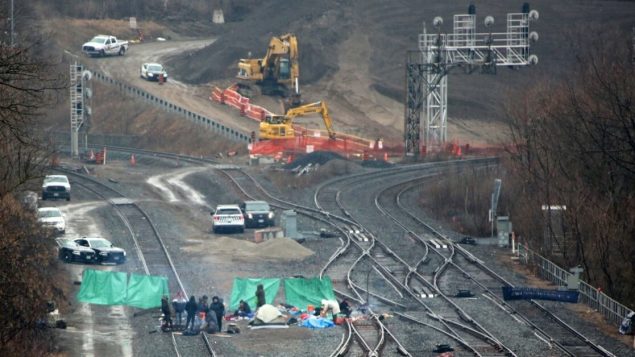 But if it appears that Canadians are losing patience, it also appears that demonstrators and protests are not about to soon disappear.

A group of young First Nations protesters, who have been camping in front of the B.C. legislature in Victoria since Monday, staged an event in support of the Wet’suwet’en hereditary chiefs on Wednesday and spoke out against the use of court injunctions to remove Indigenous people from the pipeline area.

Their demonstration came after Mohawks at Kahnawake, south of Montreal, said they did not intend to end their blockade that began Feb. 8, despite CN Rail being granted an injunction Tuesday to free the tracks.

Grand Chief Joseph Norton said the Mohawk Council of Kahnawake is considering its options, including challenging the injunction.

Norton said the injunction would not be executed in Kahnawake because Mohawk Peacekeepers are the only policing agency in the territory.

The train eventually moved through, though it slowed down briefly after protesters tossed a lit pallet nearby.

The incident took place in the same area where Ontario Provincial Police removed a blockade on Monday.