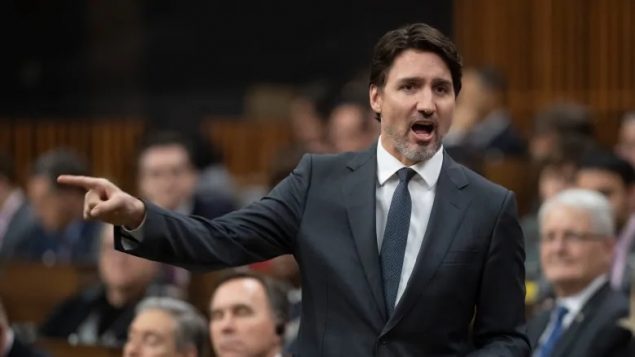 Prime Minister Justin Trudeau was in Parliament yesterday, March 11, but today is in self-isolation as a precaution after his wife exhibited some symptoms of the virus. (Adrian Wyld-CP)

Canada’s Prime Minister, JustinTrudeau, has gone into self-isolation along with his wife after her return from a trip to the UK. Upon her return she apparently began exhibiting some mild flu-like symptoms and a low fever.

Justin Trudeau is not exhibiting any symptoms and is said to be conducting briefings and meetings from his home.

This will continue until the results are in from the medical tests on his wife.

A meeting with Canada’s premiers, which was to take place today, was postponed.

The leader of the opposition New Democratic Party, Jagmeet Singh, has also just reported that he has gone into self-isolation after he indicated he was not feeling well and exhibiting some symptoms similar to those of the virus.

In the meantime, Deputy Prime Minister Chrystia Freeland says Canada is waiting for more information from the United States before deciding whether to follow the American lead and suspend flights from Europe.

Canada now is also reporting its first case of a child having contracted the virus. The daycare in Calgary is temporarily closed and the

In Canada’s most populous province, 17 new cases in Ontario have been confirmed. So far there has been one confirmed death in Canada attributed to the virus.