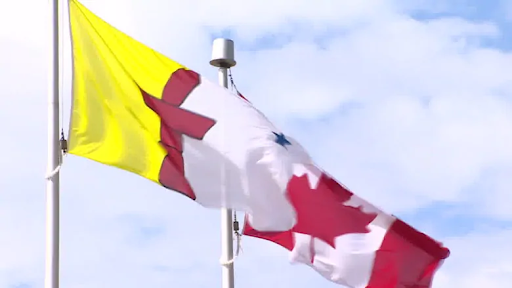 The Nunavut territory's new flag, alongside the Canadian Maple Leaf. The new flag is yellow and white divided by a red Inukshuk with a blue star in the upper fly. The Inukshuk is a traditional land marker guide, while the blue star represents the North Star. The yellow and blue represent the riches of land and sea, while the red symbolises Canada. (Travis Burke/CBC)

The Inuit who comprise the vast majority of the approximately 39,000 residents of the eastern Arctic, had long been requesting authority over their region.

In 1976 Inuit groups had sought political control over the region as a way to settle numerous land claims in the Northwest Territories (N.W.T.), which then stretched across several thousands of kilometres of Canada’s Arctic.

The proposal would divide the N.W.T. into two, with the eastern half to be known as Nunavut, which is the Inuktitut word for “our land”. The newly divided area would also include the majority of the Arctic archipelago.

The new territory of Nunavut carved out of the previously larger Northwest Territories came into being as a separate governed entity on April 1, 1999 (Tubs/wiki commons)

In 1991, a preliminary agreement involving Inuit and government representatives set the boundaries of the newest territory and other governing parameters, and in 1993, the Nunavut Land Claims Agreement (NLCA) was passed by Parliament with Royal Assent on July 1. That day is now celebrated as Nunavut Day.

However, several years time was needed to prepare for the creation of governing institutions, and other infrastructure needs, and so it was that Canada’s newest government and territory came into being officially on this day in April 1, 1999, thus redrawing the map of Canada with now three territories: Yukon, the Northwest Territories and Nunavut.

It may be interesting to note that Canada’s final province also came into being on April 1 back in 1949, when Newfoundland, then a British controlled colony, agreed by a narrow margin to join the Canadian confederation.

However, political leader and first Premier Joey Smallwood, insisted that the Act of joining come into force before midnight on March 31, to avoid future cynical claims that joining was an ‘April fools’ joke.