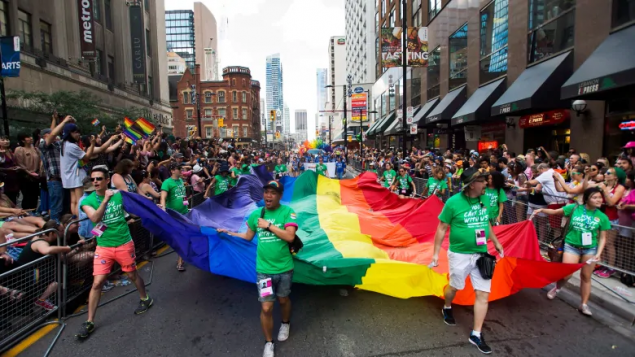 Another victim of the pandemic, the hugely popular Gay Pride parade in Toronto has been cancelled. Along with the TD Toronto Jazz Festival, which is also cancelled, the events pump hundreds of millions into the city's economy (Nathan Denette/The Canadian Press)

The feeling among medical experts is that Canada has yet to see the peak in COVID-19 cases. To that end more closings have been announced in an effort to prevent transmission among people.

Green spaces that are not required to be closed will allow walkthrough possibility as long as people keep their distance from each other.

In addition Canada’s largest city and urban centre, Toronto, has just announced all city events are cancelled until at least June 30. This includes such things as the very popular 10 day jazz festival which was slated to start on June 18, and ends on the 28th which was the day slated the huge Gay Pride Parade following Pride Weekend (26-28). Those events usually attract well over one million people to the city and according to Pride Toronto in 2019 pumped well over $370 million into the city and province’s GDP. 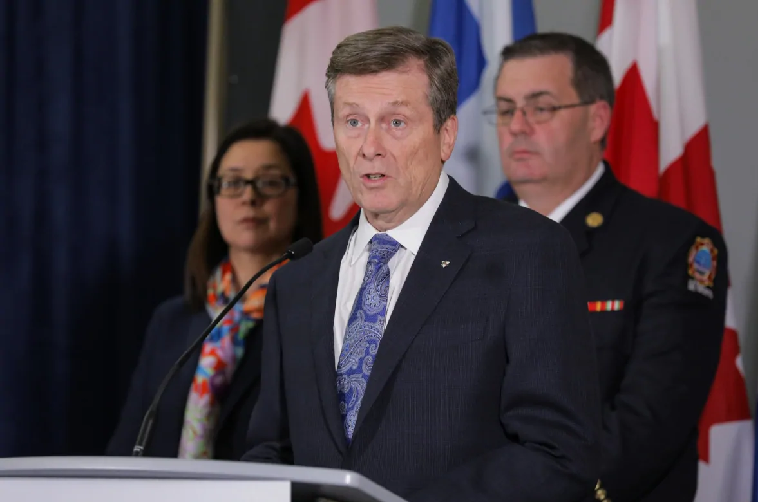 Toronto Mayor John Tory said the cancellation of events was a very difficult choice but protecting the health and safety of residents is the priority Citizens were also reminded that if they use the amenities in parks that have been closed, they risk being fined (Michael Wilson-CBC)

Toronto Mayor John Tory said the closures include all conferences, festivals, and cultural events including any major event in or on city owned property such as civic centres, parks, city museums, or public spaces.

Throughout the province, all non-essential businesses have been ordered closed under emergency health orders in an effort to slow the spread of COVID-19.

With so many business closings, orders to work from home, tourism drying up, and and international travel restrictions many of Canada’s hotels have simply closed up

while areas that normally depend on vast amounts of tourist dollars have seen their hopes virtually dashed. Now Canada’s airline industry is saying it is on the edge of collapse. 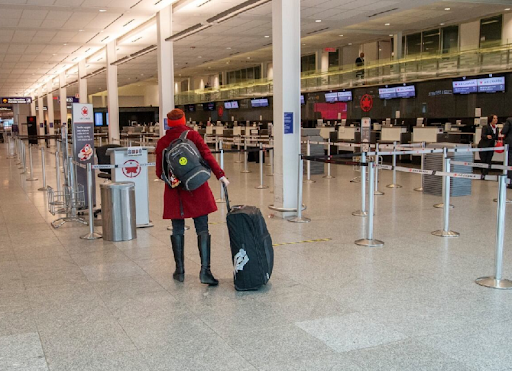 March 30, 2020: Montreal’s Trudeau International airport is normally one of the busiest in Canada, yet is now virtually deserted, with fewer and fewer flights being offered anywhere and fewer passengers wanting or needing to take them. An airline industry spokesman says some of Canada’s air services may not survive without quick financial aid from the government (Ryan Remiorz/The Canadian Press)

John McKenna is president of the industry lobby group, the  Air Transport Association of Canada,  Quoted by CBC News, he said,  “The impact of all this is just devastating. People aren’t flying at all or capacity is at 10, 15 per cent. Nobody can sustain that for very much longer, that’s for sure”.

Several smaller air carriers have temporarily ceased operations entirely, while the major carriers have drastically cut back on flights and personnel with thousands laid off.. Canada’s largest, and one of the world’s main carriers, Air Canada, has laid of 17,000 of its own workers and today will further cut flights to the U.S and overseas, McKenna says without a quick injection of federal aid to the industry some airlines will have to close permanently along with their jobs.

While the media of late seems to be full of bad news, there is a slightly quirky and rather less ominous note occuring in Canada. Something unusual is happening with Canadian money related to COVID-19.

While non-essential businesses across the province, (and elsewhere in Canada such as Quebec) have been ordered to close, those still open are generally trying to avoid accepting cash. This is over concerns the virus may be lurking on banknotes and coins.

Still, there are customers who prefer paying cash, or who do not have credit or debit cards. Some businesses have now taken ‘money laundering’ to its literal meaning.  When they receive cash or coins, those retailers are taking the money to the wash basins and with soapy water, giving them a good cleaning so that money handed back to clients as change is assured to be virus free. Some individuals are also ‘laundering’ Canadian money. 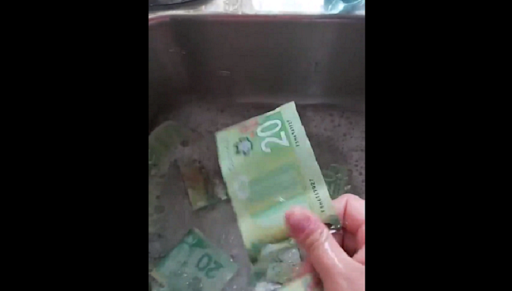 Some businesses, along with some individuals have taken to washing Canadian money to ensure it’s infection free. A Facebook video earlier this month of someone washing $20 bills has gone viral. (via FreshDaily-Twitter- Facebook)

Coins of course have no problem with water, but banknotes have typically been made with various combinations of fibres like cotton, but no longer in Canada. While such fibre bills don’t do well in a wash basin, Canada’s bills are now made of a polymer. Many Canadians had complaints about Canada’s new ‘plastic’ bills when they were introduced starting in late 2011, due to the feel and they sometimes stick together when counting them. However, besides lasting about 2.5 times longer than the old banknotes, they have the distinct advantage over typical cotton based banknotes, in that they can easily survive a washing.

The Bank of Canada meanwhile is encouraging businesses to continue to accept cash adding that people handling money should  simply wash their hands as they would when touching other surfaces adding the risk from banknotes is no greater than that of touching doorknobs, handrails or other surfaces.