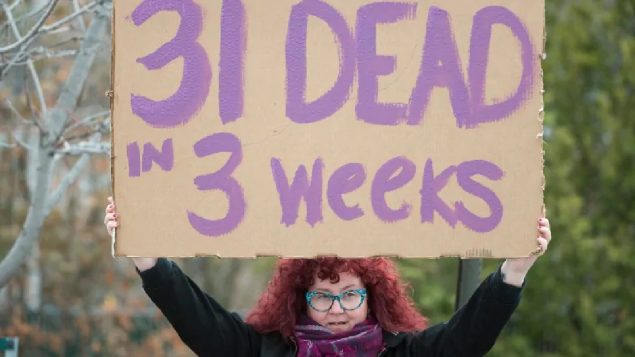 A woman protesting the tragic situation outside a seniors residence in Montreal. The high number of deaths at the privately run residence has sparked an investigation into the operation and into all privately run seniors homes in the province where there have been unusually high death numbers. (Graham Hughes- The Canadian Press)

The conditions in the mainly French-speaking province of Quebec at long-term health care centres and privately run retirement homes is being called into question over the high death rates from COVID-19.

At a press conference on Saturday, Quebec Premier Francois Legault noted that a third of the (then) 216 deaths in the province had occurred in the province’s  long-term public health centres known as CHLSD’s (Centre d’hébergement de soin de longue durée)  notably six of them in particular. These were in Montreal, Laval, and Shawinigan. 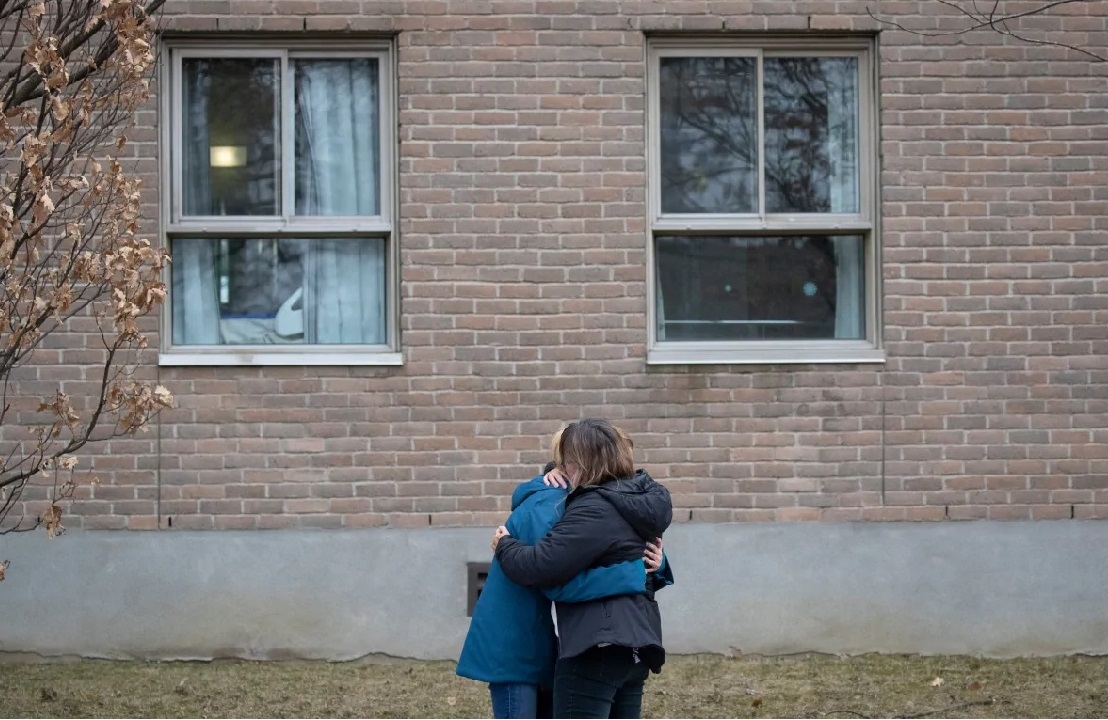 Two people embrace outside CHSLD Yvon-Brunet in the Sud-Ouest borough, one of the seniors homes mentioned as having an unusually high death rate. Public health officials say 17 people have died at the residence since the outbreak began. (Ivanoh Demers/Radio-Canada)

The number of COVID deaths in the province as of April 12, rose to 328.

A privately run CHLSD seniors residence has also come under particular scrutiny after officials descended on the 150 unit operation on March 29 to investigate some 31 deaths there since March 13. Two are known to have died from the virus, and 18 others of as yet unspecified causes, although Quebec Premier Francois Legault says at least five are known to have died from COVID-19 and the number could rise. 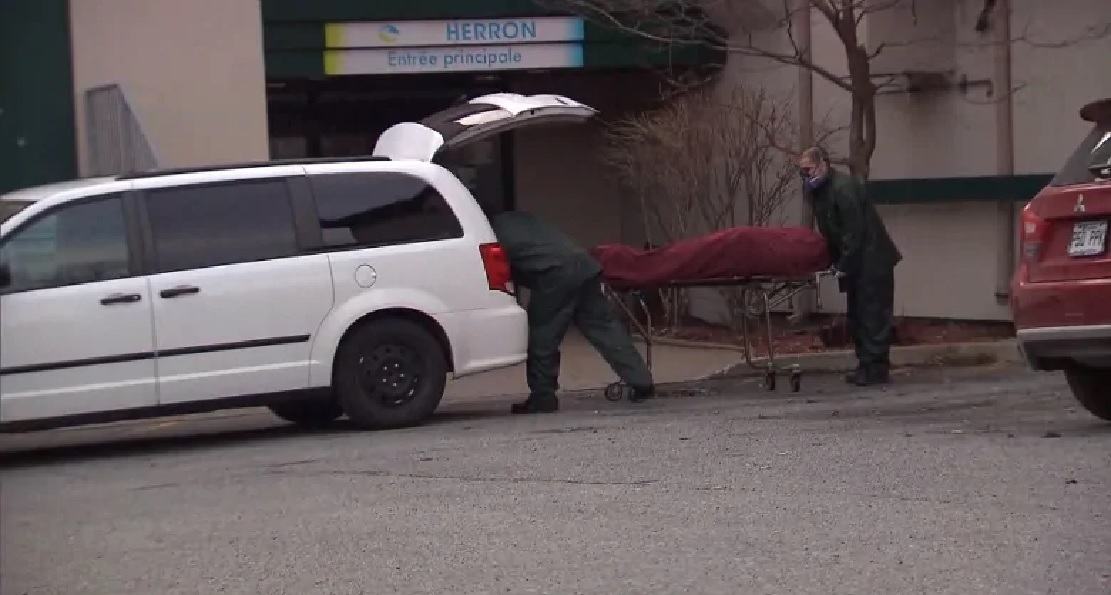 The operation, Residence Herron in Dorval near Montreal’s international airport, bills itself as a ‘luxury’ retirement home charging residents thousands of dollars per month for housing and care.

Officials discovered that many of the staff had deserted the operation, leaving a number of seniors unattended in soiled beds and unfed. Remaining staff told CBC that at least a dozen other residents had died of COVID-19 and that there are 30 other confirmed cases of residents still living there.

The owner of the residence had been uncooperative until a government order forced the company to hand over clinical files on April 8.

As conditions were revealed, the regional health authority then stepped in to supply staff and take over the operation on Friday, April 10.

Herron is owned by a Gatineau, Quebec real estate company, Katasa, which also owns six other such residences in addition to other commercial and residential buildings in the province.

Premier Legault said it would launch a review all of Katasa’s facilities and Montreal police have been asked to investigate. He also noted officials would be examining the information provided by some 40 other private long-term care operations.  This past Sunday, the provincial coroner’s office said it would also launch an investigation. 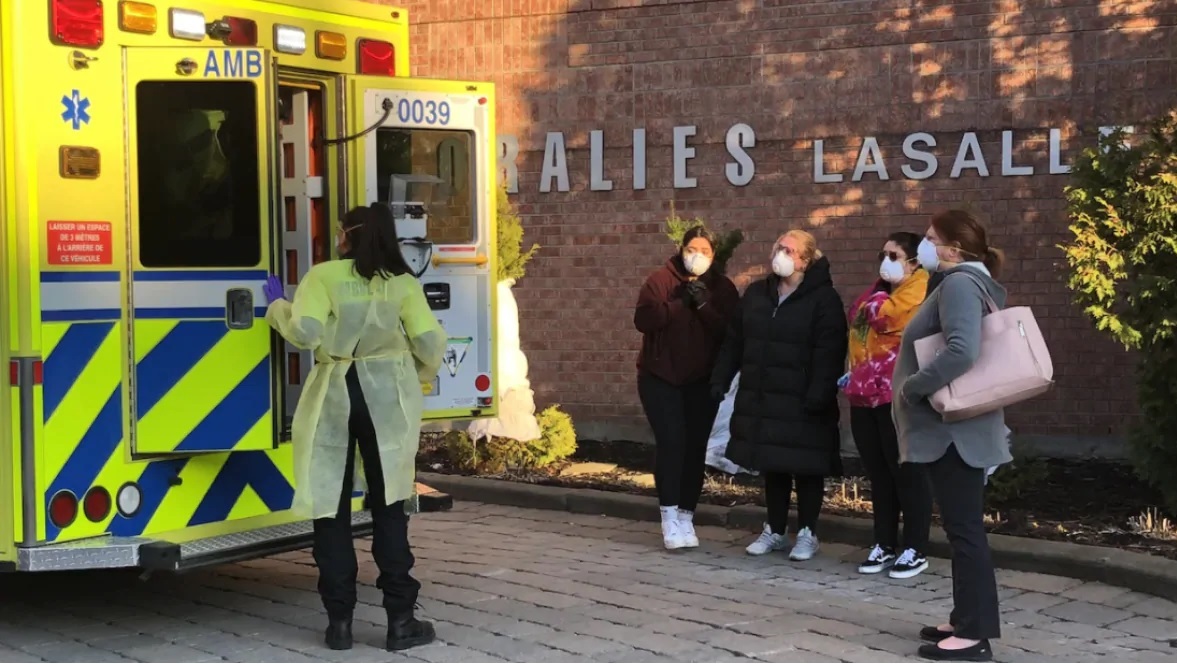 There have been at least 12 deaths linked to COVID-19 at Les Floralies private seniors’ home in LaSalle. The province says it will look into the operations of all 41 privately run seniors centres in the province.The private owners association says singling them out is unfair when the province failed to provide promised additional funds and protective equipment for staff and as similar problems exist at the publicly run centres (David Gentile/Radio-Canada)

Quebec’s Health Minister, Danielle McCann, has said officials would visit all 41 of the province’s private  CHLSD’s to ensure proper handling of the coronavirus situation and provide assistance where needed.

The CBC reports that on Sunday, the  president of the private CHLSD ass0ciation said targeting private CHLSDs ignored similar deadly situations at the publicly run operations. Michel Nardella also noted promised additional government funding for the private CHLSD’s had never been acted upon, and that supplies of protective equipment for staff at the private operations had been cut off in favour of hospitals and publicly run CHLSD’s.

Meanwhile, a medical malpractice lawyer said a class action lawsuit against the Herron residence owners has been launched adding that the families of the dead deserve a public inquiry into the situation.