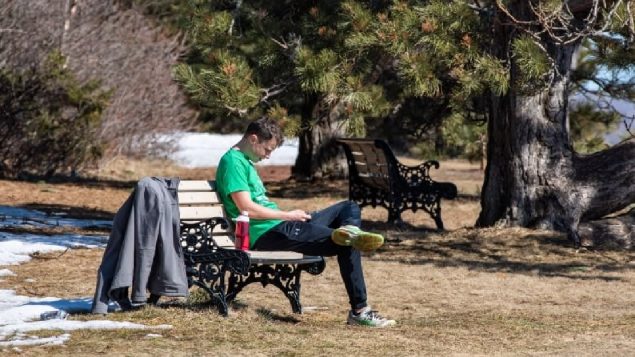 Sitting on a park bench checking your smart phone, enjoying a book or just relaxing in the pleasant surroundings. This simplest, most banal, and entirely harmless act was entirely normal and legal until the pandemic. Now it will cost you hundreds of dollars in fines (Bruce McInnis-CBC)

COVID-19: Canadians upset at fines for simplest of things

Emergency rules for social distancing seem not well-understood. That misunderstanding is costing many people hundreds of dollars in fines.

People, now spending much more time indoors, want to get outside, but there seems to be confusion about provincial rules and also about slightly differing municipal rules among cities. Toronto allows people to walk through certain parks and greenspaces, but in Ottawa a man was fined $880 simply for walking his dog through a park.

An Oakville father was fined for letting his sons, who all live together under the same roof, rollerblade in a completely empty parking lot.

Police in several cities have issued dozens of tickets and hundreds of warnings to people walking about but not maintaining social distance between them.

Some areas allow people to walk through parks, maintaining that distance, but not use park facilities. A Toronto man was fined for doing chin-ups on park equipment.

The ban on park equipment includes picnic areas, but most people didn’t know this includes simply sitting on a park bench by a walkway, even by yourself. An example is when Ottawa police slapped two young women with a $750 fine each (+ victim surcharge =$880) when they sat down together on a park bench but at each end, maintaining distance.

The bylaw officers issued them tickets for “ Failure to comply with order given during a declared emergency in contravention of the Emergency Management and Civil Protection Act’.

It was a very heavy financial burden for the tearful women who had recently been laid off when the restaurant where they worked closed.

In Toronto a similar situation was occurring until the city issued a clarifcation after people were fined for ‘lingering’ on park benches.  The city said people walking  through a park can use the benches to rest, but are not to sit on them beyond “necessary resting purposes’.

Even so, officers will have to judge the difference between resting and lingering, the latter subject to the $750  fine.

Michael Bryant is the executive director of the non-profit Canadian Civil Liberties Association, He said it is unconstitutional for police and bylaw officers to make up the law as they go along. Quoted in the Globe and Mail, he said, “The test for a constitutional law under every circumstance, including emergency, is that it has to be prescribed by law, necessary and proportionate. And in this case it seems to be none of the above.”

The CCLA has also warned about the extensive powers to create laws given to Alberta’s health minister which gives him power to create legislation without the need to consult the legislature. The group has also complained about the ticketing situation in Ottawa and about an order in Nunavut against public gatherings and potentially warrantless entry by police into private dwellings.

The CCLA which has so far not proceeded with any legal challenges against possible rights infringement but has created an online portal where people can share experiences about enforcement.

There is also a concern that as spring warm weather encourages people to walk about, there will be pushback and resistance to what may be perceived as heavy-handed  enforcement of unreasonable rules.

Quoted by PostMedia, Bryant said, “When laws are unworkable or indecipherable, people will ignore them,” Bryant said. “When enforcement is unfair and arbitrary, people become less compliant and more defiant. They focus less on trying to obey the rules, and more on trying to not get caught”.