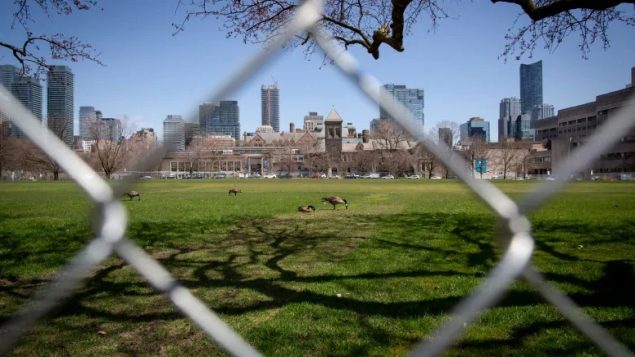 Toronto and Ontario playing fields now enjoyed by geese, may soon be opened again. Ontario has announced a 3-stage plan for relaxing pandemic restrictions, but not with firm dates. Some other provinces have begun a slight lossening ( Evan Mitsui-CBC)

Wartime British Prime Minister Winston Churchill once said regarding a major victory in 1942, “Now this is not the end. It is not even the beginning of the end. But it is, perhaps, the end of the beginning”.

Perhaps that might also be said of the battle against SARS CoV-2.

While Prime Minister Justin Trudeau and Chief Public Health Officer Dr. Theresa Tam are both urging caution and that measures shouldn’t be relaxed just yet and that any reopening of ‘certain sectors’ of the economy and society must be done carefully and over a period of months.

With billions of dollars announced by federal and provincial governments on emergency bridging funding for individuals and businesses, there are vast sectors of the economy in deep financial woe, and the pressure to reopen is enormous.

Trudeau said the federal government is working with provinces  to develop ‘essential principles’ towards reopening the economy.

Provinces not waiting for feds

Given the pressure from business and the public, provincial Premiers have begun announcing re-opening plans. In some cases timelines have not been laid out, while in others, the process has begun.

Doug Ford, Premier of Ontario, Canada’s most populous province, announced a three part plan yesterday, calling it a “roadmap, not a calendar”. Although the rate of infections in the province has slowed, Ford said a consistent two to four week decline in cases is needed before a slow loosening of restrictions can begin. 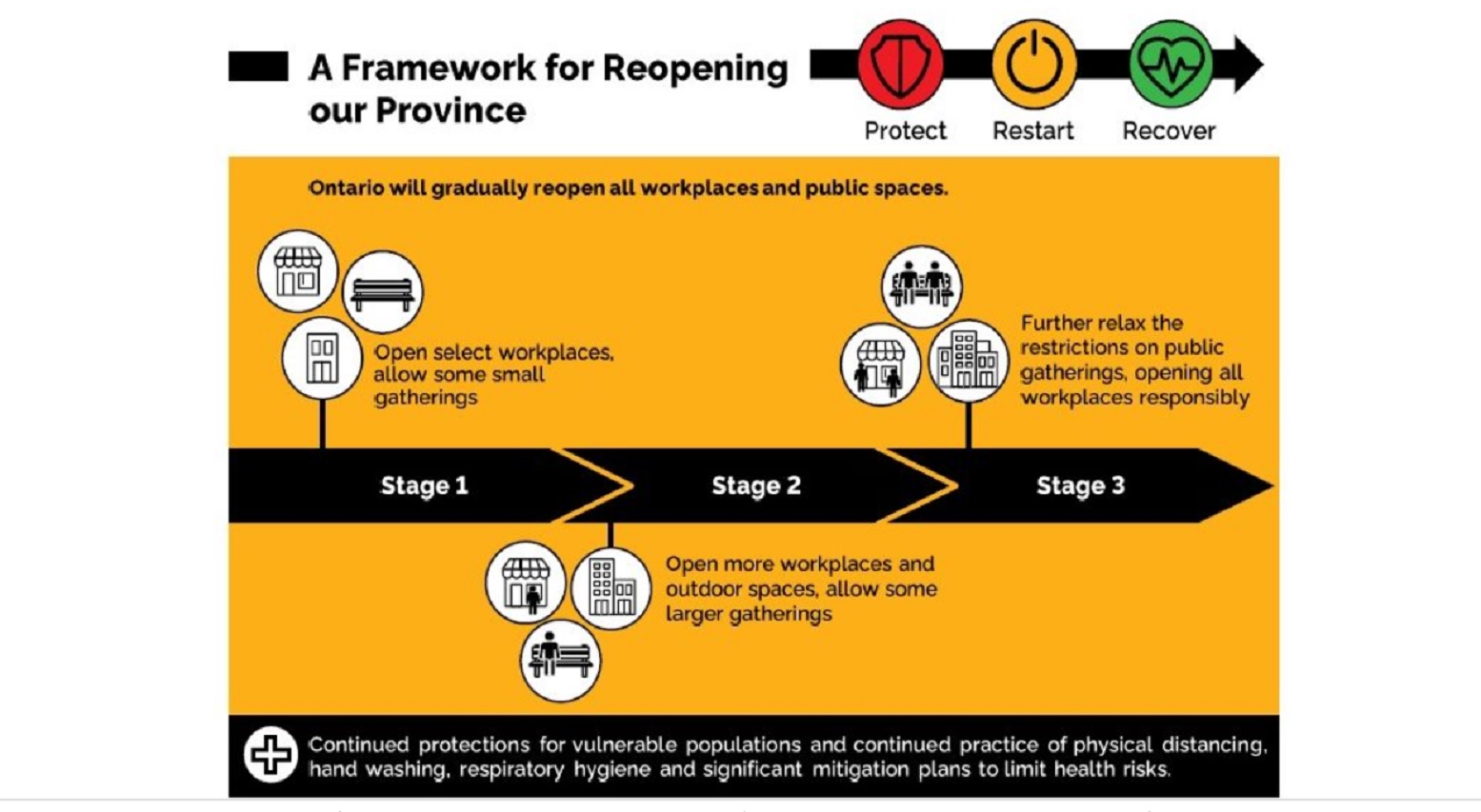 Ontario’s 3-stage roadmap,: a plan but no firm dates yet (Gov’t of Ontario)

Canada’s second most populous province, Quebec, has been hardest hit with over 1,500 deaths attributed to the virus, Saying that the situation is now getting under control, Premier Francois Legault on Monday announced that daycares and primary schools can begin reopening during May, but with reduced class size and daycare limits on children while all other schools, colleges and universities will remain closed until August or September. However, saying “life must go on” Legault is expected to announce some business re-opening today.  Garden centres, big box hardware stores, and auto repair garages are already opened, but practicing social distancing. Bans on public gatherings remain.

The prairie province of Saskatchewan however has already announced that the process of gradual loosening of restrictions will begin on May 4.  Premier Scott Moe announced a five-stage process which will begin with the resumption of non-emergency medical procedures and the re-opening of provincial parks, camp grounds and golf courses. If all goes well in terms of infection rates, the province will allow some businesses to re-open like barbershops and hair dressers, dentists, optometrists and so on, to be followed still later by restaurant, daycare and other operations. 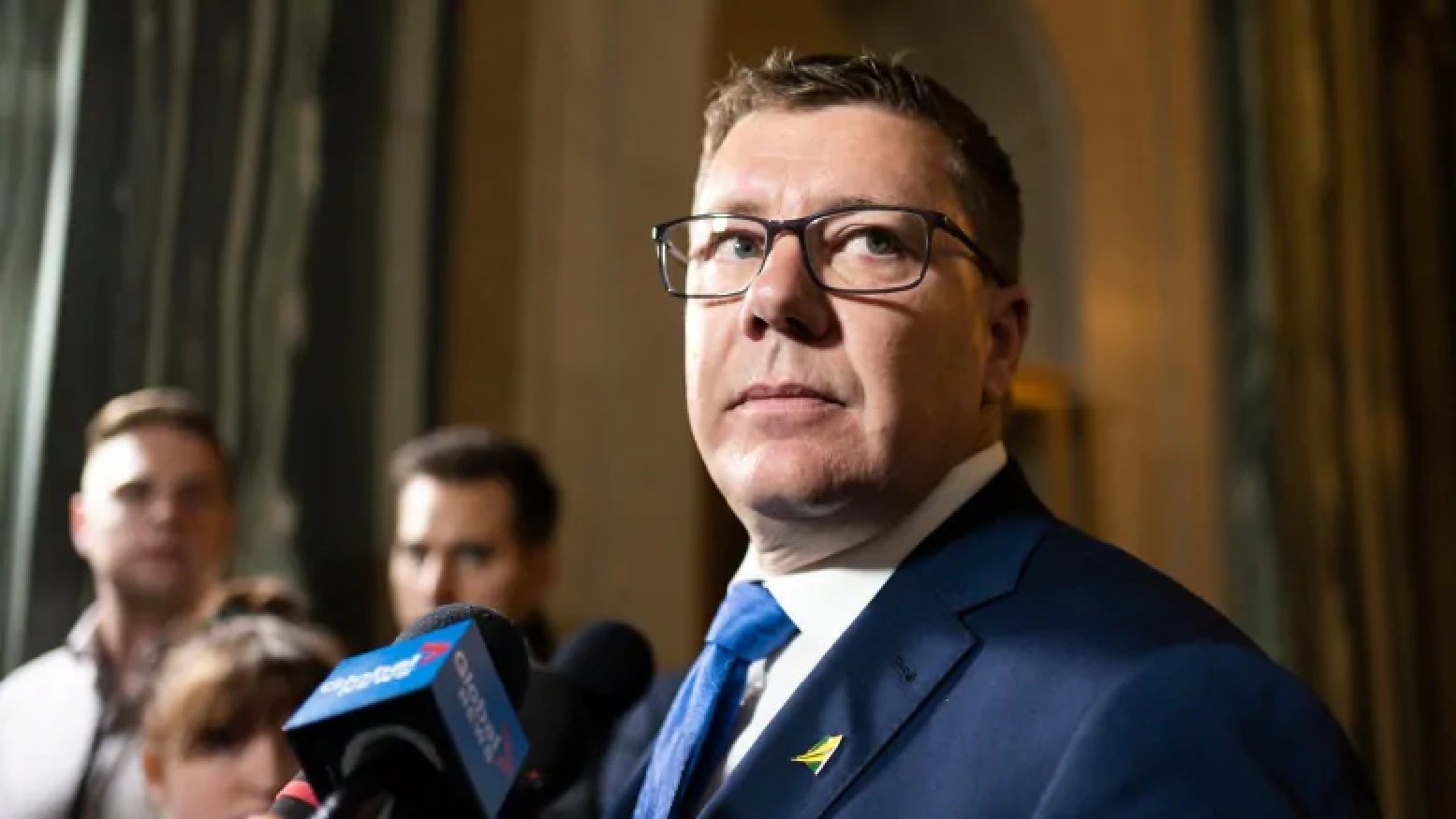 Saskatchewan’s neighbours, however, are more cautious.

Alberta has not yet released plans towards a re-opening of the economy although Premier Jason Kenney said a committee will meet this week to discuss plans. Manitoba’s Premier Brian Pallister said the province’s plans for re-opening non-essentia businesses will be released this week, but provided no date

The maritime province of New Brunswick has also already announced a slight lessening of restrictions. After several days of no new infections, Premier Blaine Higgs announced a four-phase plan last week. Parks, beaches and golf courses opened on Friday. Large gatherings are still banned, but religious services can be held as long as they are outside with people maintaining social distancing. Universities and colleges may also reopen parts of their campuses for students in special cases. But Higgs warned this does not mean it’s a free for all, and people should still follow the rules .

The  small province of Prince Edward Island has the lowest rate of infection in all N. America, and has had no new cases reported since April 15. Premier Dennis King said loosening of restrictions will proceed slowly with elective medical procedures to begin May 1, and allowance for residents to take part in some outdoor activities. Starting in March, travellers who had been off the island were told to self-isolate for two weeks, and then on April 1 began turning away travellers who were deemed non-essential.

In west coast British Columbia, certain businesses had not been ordered closed, although many did so voluntarily. Playgrounds, parks, and golf courses were not closed and those that did close can re-open. Other restrictions under the province health emergency order remain in place for the time being, although if there are no new infections for ‘a couple of days’, elective surgeries can resume sometime next month.

Newfoundland has had no new infection cases reported for several days, but Premier Dwight Ball said it’s not time yet to reopen the economy, and emergency health restrictions remain in place.

Nova Scotia’s emergency restrictions remain in place as well although plans are being discussed this week as to how the province might proceed.

In the far north, Yukon’s chief medical officer said last week that plans for a reopening are being discussed, but are still weeks away.  The Northwest Territories with only five cases of infection are maintaining restrictions which are expected to remain in place possibly throughout May. As of  Monday, Nunavut has had no confirmed cases of  COVID-19, but has no plans announced of re-opening the economy.

Two of the hardest hit European countries have begun their loosening of restrictions. Italy announced parks and gardens will reopen May 4, funerals will be allowed, and factories can resume if they enact safety measures. Stores and museums will reopen mid-May with restaurants , cafes etc opening June 1 if all goes well.

Spain has allowed children under age 14 to go outside to play in the streets with both France and Spain expected to announce a loosening of restrictions today.

New Zealand which has been under its ‘Level-4’ lockdown relaxes some restrictions today with schools up to level 10 reopening on Wednesday. Work places with appropriate safety measures wil open today, with an estimated one million people returning to work. Classified as Level 3 lockdown, the country will only move to Level 2 after two weeks if all goes well.

Britain has been hard hit by the virus with some 20,000 deaths. Prime Minister, Boris Johnson, who himself battled COVID-19, has recovered but is counselling that Britain not relax its restrictions for the present. On Monday, his first day back at work, he said the U,K. was at “the moment of maximu risk” adding the lockdown restrictions would be reviewed again next by May 7.