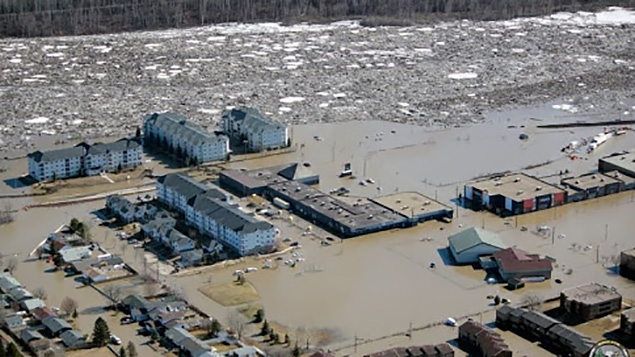 Warm temperatures are offering some hope to thousands of evacuees in Fort McMurray, Alta., who are waiting for the river to break. (McMurray Aviation)

The flooding in northern Alberta that has forced thousands to leave their homes in the city of Fort McMurray has claimed its first life.

It happened near Fort McKay, a community located about 55 kilometres north of Fort McMurray at the confluence of the Athabasca and McKay rivers.

The RCMP said two men from the Fort McKay First Nation were on ATVs on a trail at their family trapping grounds on Tuesday when water levels suddenly rose and the men were swept into the Athabasca River.

The pair managed to hold on to a submerged log and were able to phone for help.

“The situation was critical due to hypothermia from exposure to the cold water,” the RCMP said in a news release. 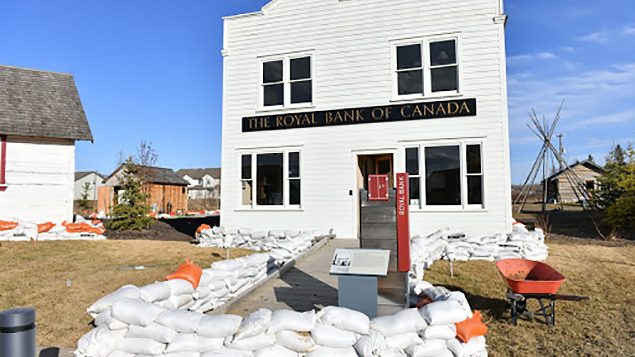 A dike of sandbags around the historic Royal Bank Building at the Heritage Village site in Fort McMurray, Alberta on Wednesday April 30, 2020. (THE CANADIAN PRESS/Greg Halinda)

When rescuers arrived, one of the men was taken by helicopter in critical condition to the Northern Lights Regional Health Centre, where he was pronounced dead.

There was no immediate word on the condition of the other man who was taken to the hospital by ambulance.

The RCMP press release said two women, two children and two dogs “were also rescued from a nearby cabin and taken to safety.”

In Fort McMurray where floods have forced an estimated 12,000 residents to flee their homes, there was some good news. 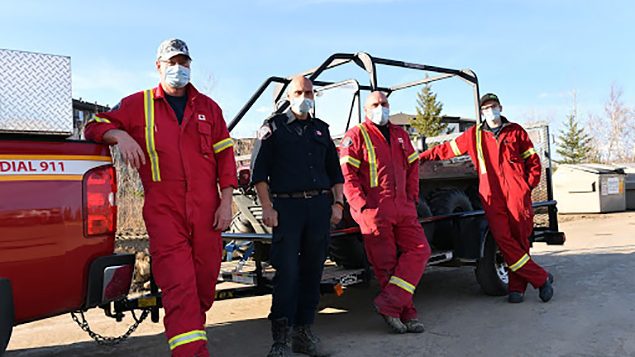 A team of firefighters from the Regional Municipality of Wood Buffalo’s Saprae Creek Fire Department that has helped rescue stranded flood victims this week in Fort McMurray are shown on Wednesday April 30, 2020. (THE CANADIAN PRESS/Greg Halinda)

The 25-kilometre-long ice jam at the root of the Fort McMurray flooding is now about half the size it was Sunday when it created the blockage forcing waters of the Athabasca into the city of 66,000 people.

Officials said Wednesday night, the jam had shrunk to 13 kilometres in size, seven kilometres shorter than it was on Tuesday.

The officials added that water levels are dropping but continue to fluctuate.

And there was other good news Wednesday for Fort McMurray residents, many of whom are still digging out from the financial and emotional damage they suffered in the 2016 wildfire that devastated much of the city.

Alberta Premier Jason Kenny announced emergency funding for those forced from their homes because of the floods.

He said emergency evacuation cash payments of $1,250 for adults and $500 for those under 18 would be available starting at noon on Monday.

With files from CBC News (Wallis Snowdon), The Canadian Press