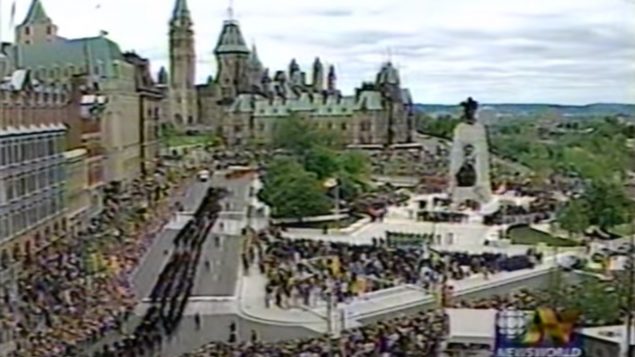 On this day 20 years ago, thousands came to Ottawa to honour the interment and honour Canada's Unknown Soldier located at the base of the National War Memorial )CBC-Newsworld video-YouTube)

It was on this day that in a solemn ceremony the remains of an unidentified Canadian soldier were interred in special tomb at the foot of the National War Memorial in Ottawa.

A legacy of the horrors of the First World War was the thousands of soldiers who fell and who could later not be identified.

Apparently during the war British Army Reverend David Railton had been affected by a small cross he had seen with the handwritten inscription, “an unknown British soldier”. That led to discussions at higher levels in both Britain and France to dedicate a national tomb containing the remains of an unknown soldier to represent and honour all those who had no known grave or who were buried but could not be identified. In 1920 the two countries held their dedications.

The concept caught on in countries around the world. 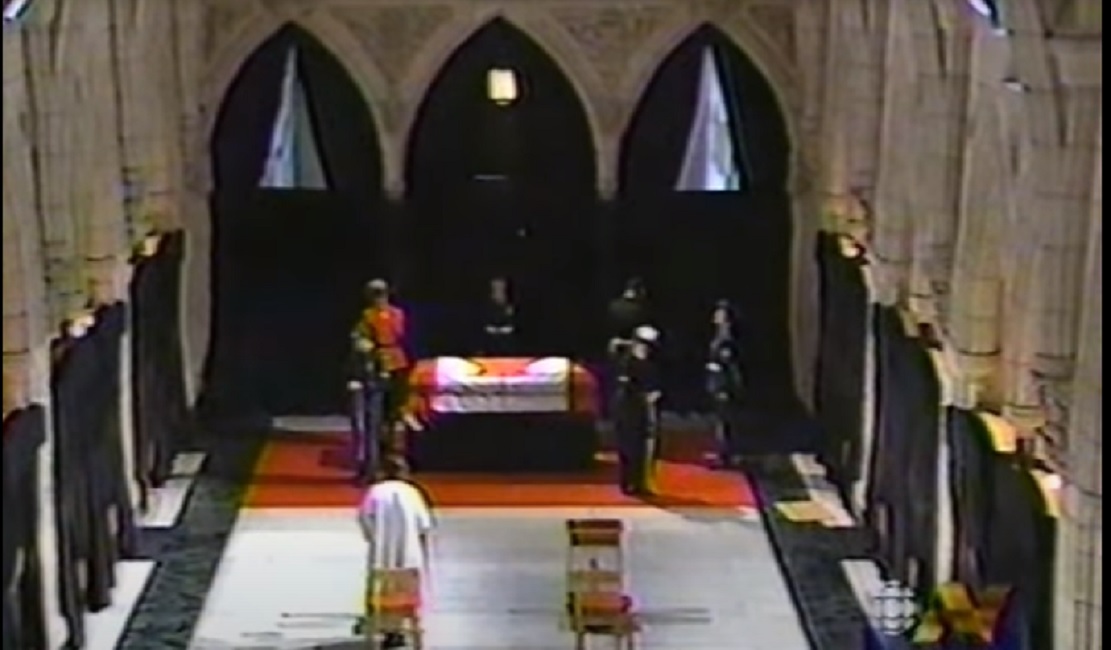 The body of the soldier first lay in state in the Hall of Honour in Parliament where crowds silently filed past, pausing to reflect and honour the sacrifice ( CBC-Newsworld- YouTube-bebragoodfellow)

In 1993, Australia had dedicated its monument leaving Canada as the last of the First World War allies without such a tomb. Even as the divisive referendum in Quebec loomed which threatened to break up the country, the idea of honouring an unknown soldier who fought for all of Canada began to take shape as a millienial project. 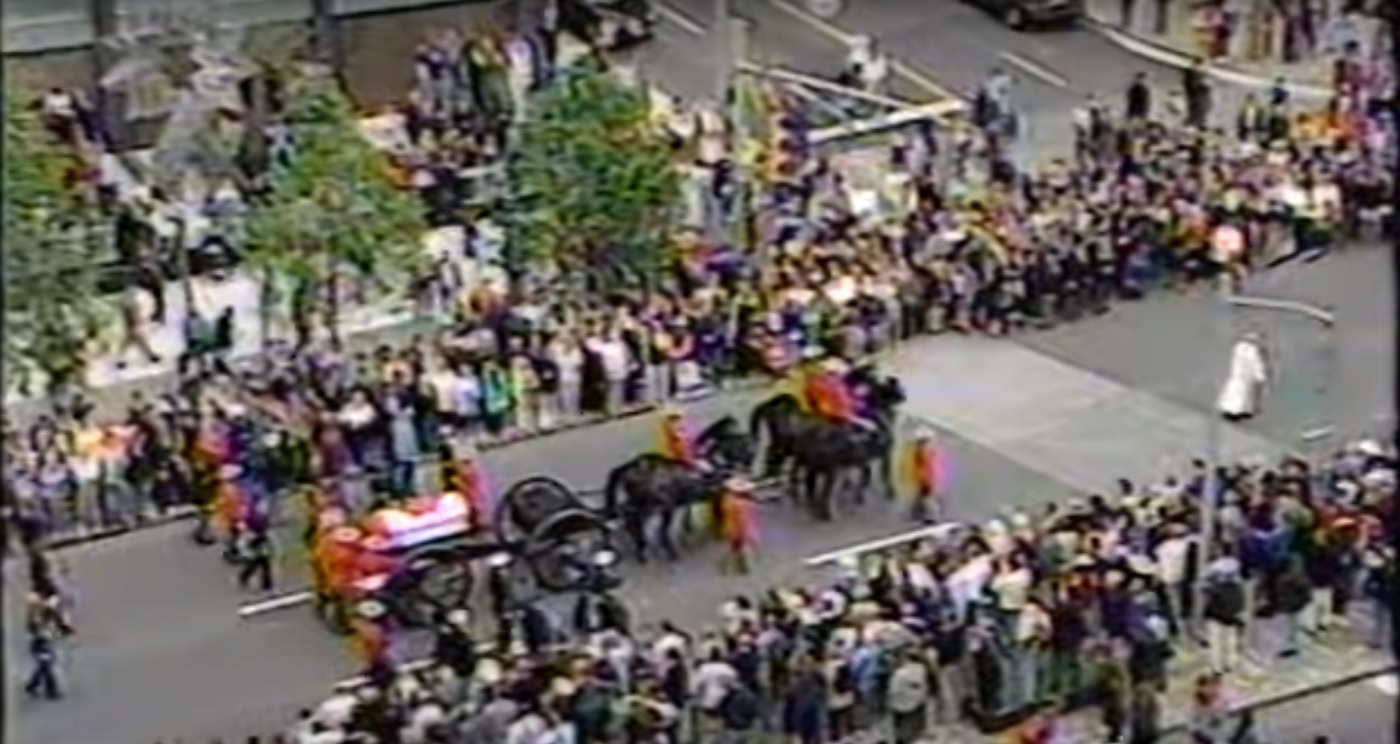 A design for the tomb was chosen from various artist’s proposals and an unknown Canadian soldier who had fallen at the epic Canadian victory at Vimy was quietly selected.  In solemn ceremony in France the remains were exhumed, transported to Canada on the 25th where they laid in state in Parliament’s Hall of Honour. It was on this date with crowds gathered around the National War Memorial in the centre of the nation’s capital that he was interred. 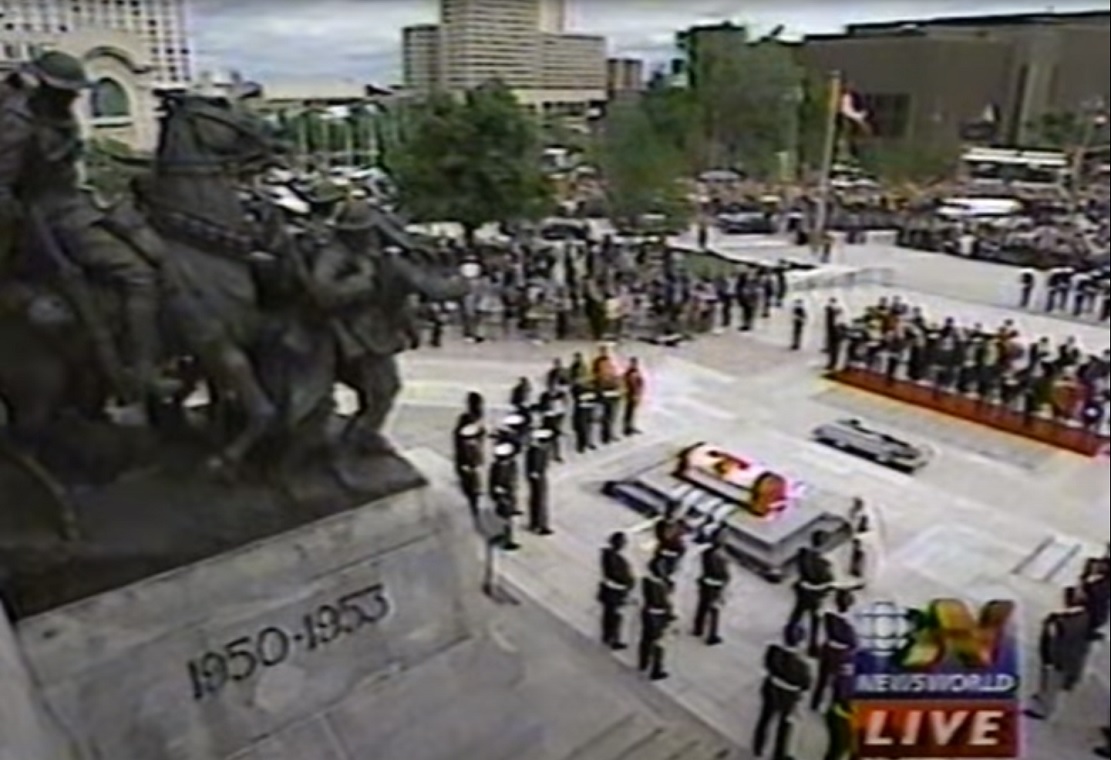 Looking past the National War Memorial, the casket is about to be lowered into its final resting place (CBC-Newsworld-Youtube)

Representative from each of the provinces and territories placed a handful of soil from their province onto the casket along with soil from Vimy France where the soldier fell. 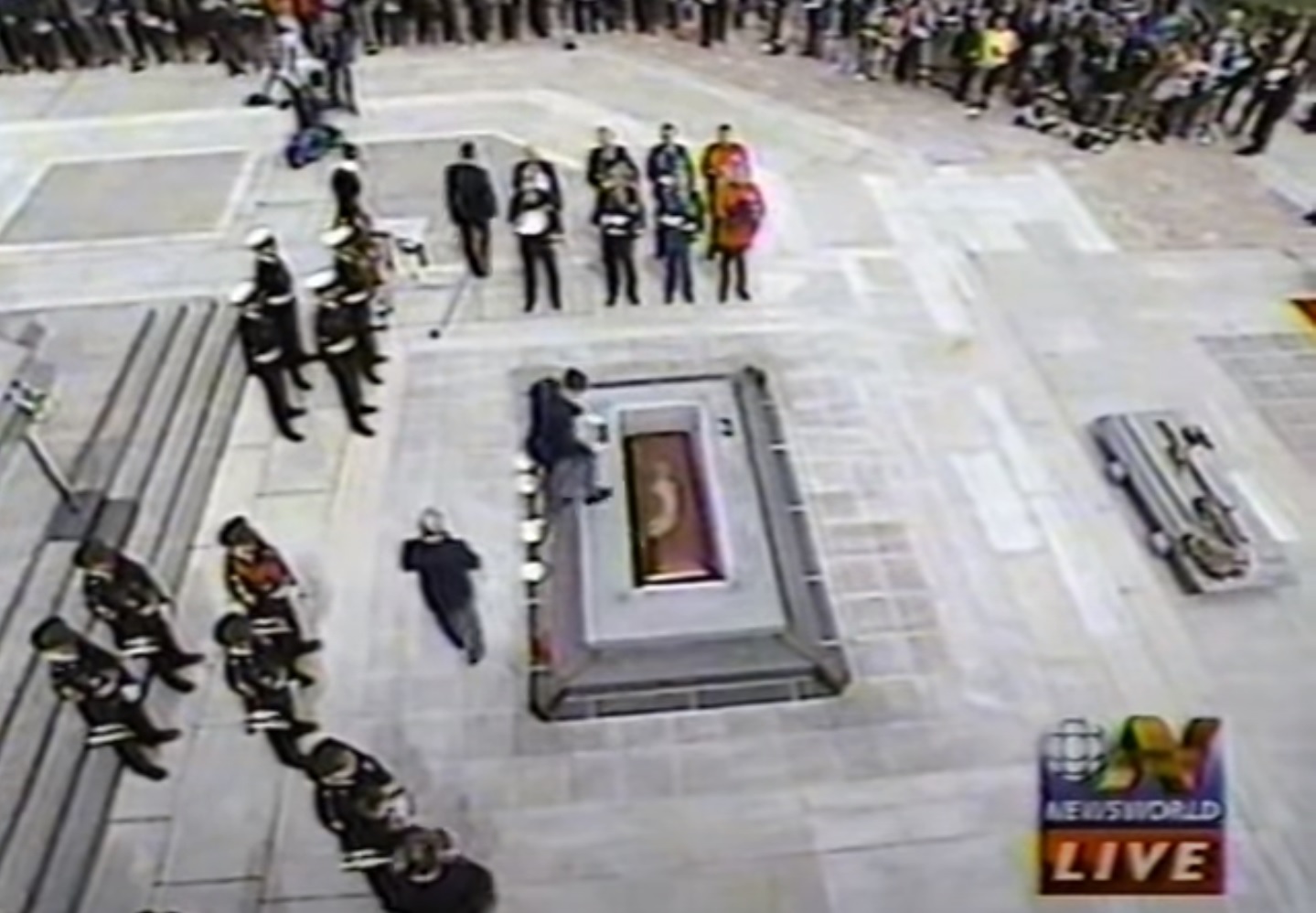 Representatives for every province and territory place a symbolic handful of soil from the region onto the casket, preceded by some soil from Vimy France ( CBC Newsworld-Youtube)

In her eulogy at the ceremony, then Governor-General Adrienne Clarkson said, “”We don’t know whose son he was. We do not know his name…. We do not know if he was a father himself. We do not know if his mother or wife received that telegram with the words ‘missing in action’ typed in electrifying clarity on an anonymous piece of paper. We do not know whether he had truly begun to live his life as a truck driver or a scientist, a miner or a teacher, a farmer or a student. We do not know where he came from. The only certainty about him is that he was young. If death is a debt we all must pay, he paid before he owed it. He is a symbol of all sacrifice. He is every soldier in all our wars.” 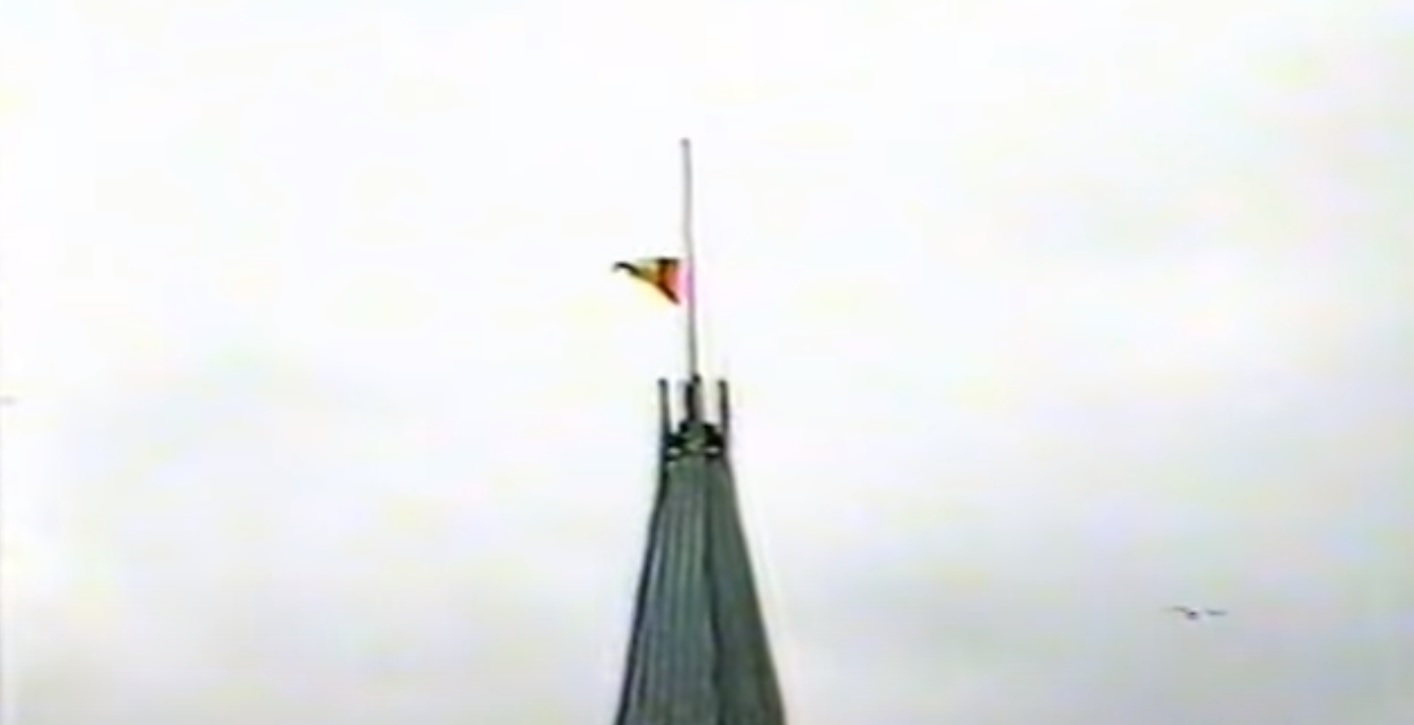 The Canadian flag about the Parliament’s “Victory and Peade Tower” lowered to half staff in respect. (CBC Newsworld- youtube)

Since then, the tomb has become an integral part of the National War Memorial and every year on November 11, thousands of Canadians who visit for Remembrance Day, place their symbolic  poppies on the tomb as a symbol of respect. 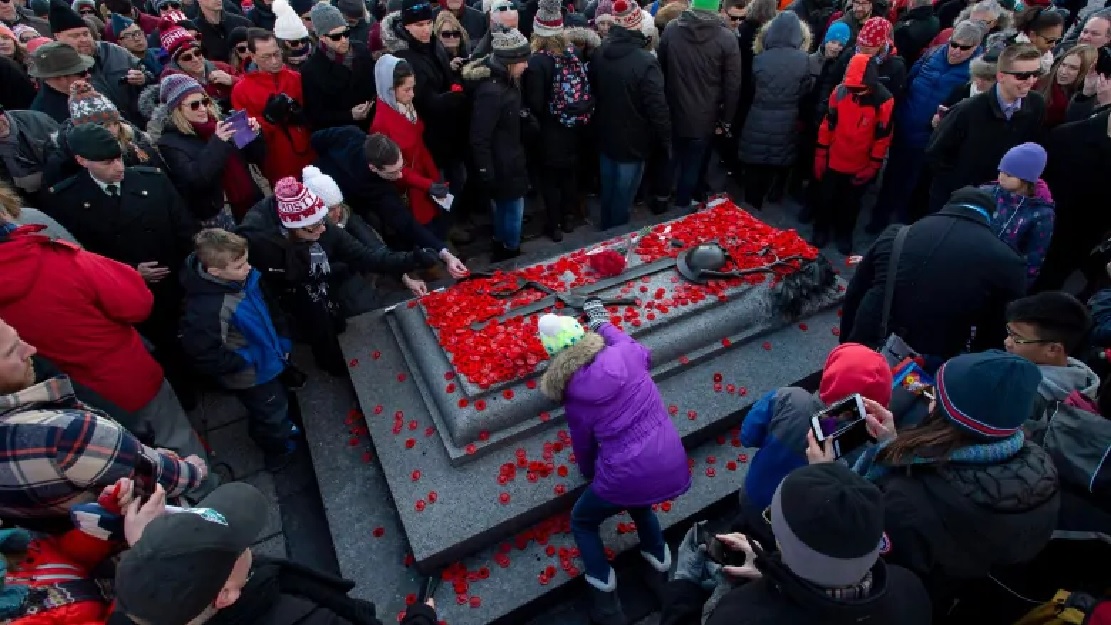 The tomb has now become the symbol of respect for all military personnel, especially on Remembrance Day ( Justin Tang- CP)

David Loveridge, director of the Canadian War Graves Commission for Canada and the Americas, laid a wreath at the Tomb today on behalf of the CWGC noting,“It’s hard to believe that the Tomb of the Unknown Solider is only 20 years old. Over the last two decades I’ve seen how this memorial has become a national icon for remembrance in Canada. It allows us to remember, every day, those soldiers who gave their life in service to Canada. It is a is a powerful monument to the history, courage and sacrifice of our nation.” 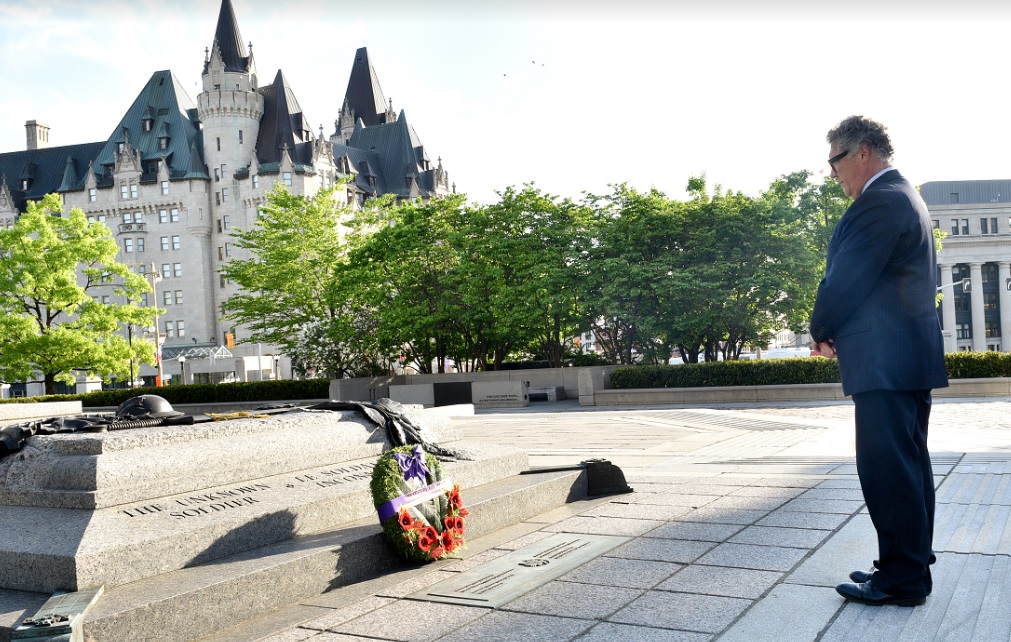 David Loveridge, Director for the Canada and the Americas Area, laid a wreath today on behalf of the Commonwealth War Graves Commission, on thie occasion of the anniversary todayl (CWGC)