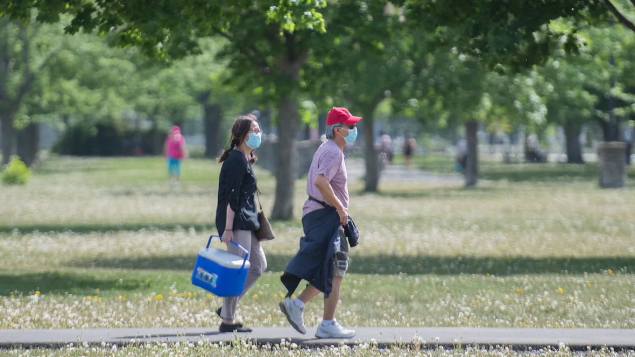 People wear face masks as they walk through a park in Montreal. In the suburb of Côte Saint-Luc, wearing masks will be mandatory in indoor public spaces, as of July 1. (Graham Hughes/THE CANADIAN PRESS)

A leafy Montreal suburb has become the first jurisdiction in Canada making it mandatory for anyone entering a business or city-owned building to wear a mask, according to its mayor, who says it’s a policy that works very well in Israel.

A bylaw passed by the Côte-St-Luc city council on Monday will require all business owners to post a sign provided by the city alerting clients to wear a mask upon entry to make sure they do.

Mayor Mitchell Brownstein told The Canadian Press his office researched the situation across the country and found no other town or province that has gone this far.

“We want to make Côte-St-Luc the safest place for people to shop, and hopefully the provinces in Canada will follow,” Brownstein said.

He told CP that Israel — where mask-wearing is mandatory for people who leave their homes — and Quebec both have roughly 8 million people, but Israel has less than half as many COVID-19 cases and fewer than 300 deaths compared to over 4,700 in Quebec. 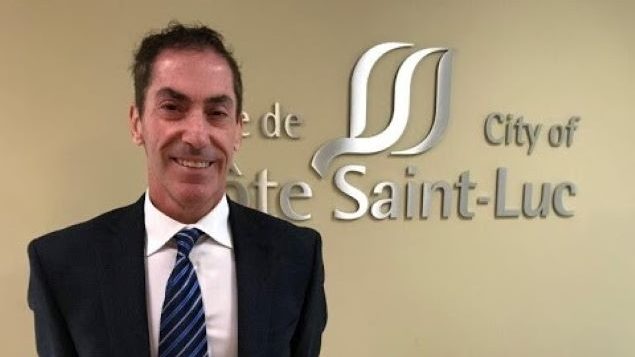 “Hopefully by July 1 everybody will be used to the new normal,” said Côte Saint-Luc Mayor Mitchell Brownstein (pictured in this photo taken on Feb. 2019). (Elias Abboud/CBC)

The bylaw passed the same day McMaster University, located in Hamilton, Ontario, published a new study that found masks really do help in the fight against COVID-19.

Brownstein said businesses have two weeks to come up with a plan to inform customers of the new rule and to put measures in place to enforce it.

He said lapses will be tolerated until the end of June, but after that, fines for businesses and individuals who violate the bylaw will range from $100 to $500.

Exceptions will be made for people with asthma or other health conditions or disabilities preventing them from wearing masks.

“We also have the ability to wear a visor as an option,” Brownstein told CBC News.

Côte-St-Luc was one of the first COVID-19 hot spots on the island of Montreal and seniors account for 30 per cent of its population of about 32,000 — the highest percentage of seniors in any municipality in Quebec.

As of Monday evening, Côte-St-Luc had 494 confirmed cases and 35 deaths this year as a result of the virus. 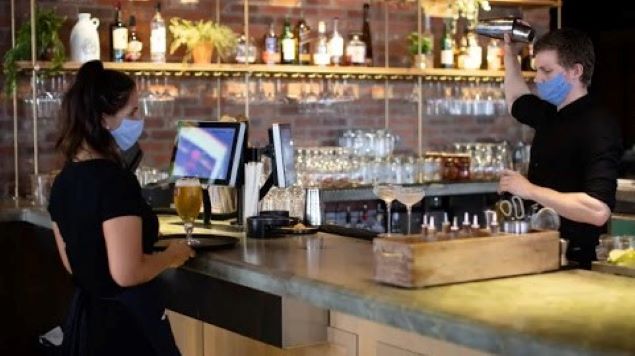 Bartenders and servers wear masks inside Earls Kitchen and Bar on their reopening day in Vancouver, B.C., on Tuesday, May 19. As of July 1, anybody inside a business or government building in Côte-St-Luc, QC must wear a mask. (Maggie MacPherson/CBC)

The bylaw also requires apartment and condo building owners to install hand sanitizer dispensers at all entrances and near elevators, and to install signs that recommend residents wear a mask in areas where physical distancing isn’t possible.

“Hopefully by July 1 everybody will be used to the new normal,” Brownstein said.

Quebec Premier Francois Legault and his public health director, Dr. Horacio Arrunda, have regularly urged citizens to wear masks on public transport and when they can’t maintain a two-metre distance from one another.

But Legault has refused calls to pass a law requiring people to do so. 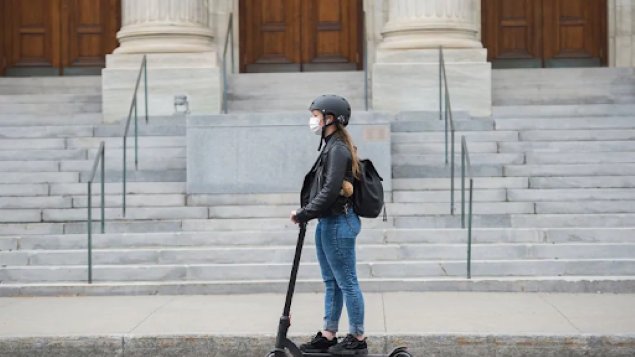 A woman wears a face mask as she rides a scooter by the Museum of Fine Arts in Montreal. (Graham Hughes/THE CANADIAN PRESS)

Mayor Brownstein said the bylaw will be in effect for three months and can be renewed as many times as necessary, adding that he doesn’t see it as any different than enforcing the use of seatbelts or bicycle helmets.

With files from CBC News, The Canadian Press (Giuseppe Valiante)