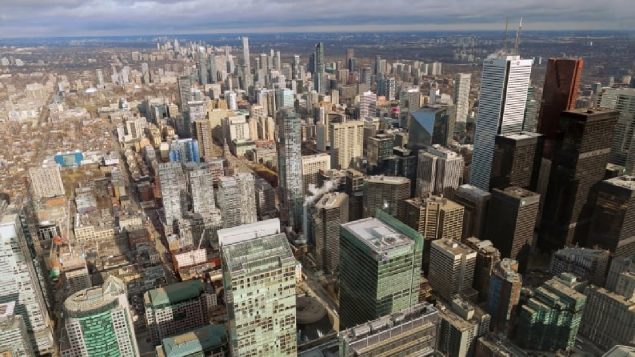 Toronto has now been calculated to be the fastest growing city in N. America as it the region surrounding the city. ( Talia Ricci-CBC0

Toronto: The fastest growing city (and region) in N. America

The area that stretches around the western end of Lake Ontario has long been known as “the golden horsehoe”, an industrial and economic powerhouse of Canada, with Toronto at the centre and with rich agricultural lands around it, especially in the Niagara peninsula.

A new study shows both the city and the region, are the fastest growing places in North America, surpassing the Dallas/Fort Worth/Arlington area of the U.S. in 2019

The study from Toronto’s Ryerson University used statistics from the U.S. Census Bureau released in May and Statistics Canada’s February report for the comparable 12-month period ending July 1, 2019.  This showed that the Toronto census metropolitan area (CMA) grew by127,575 residents compared to 117,380 new residents in the Dallas/Ft Worth/Arlington area. 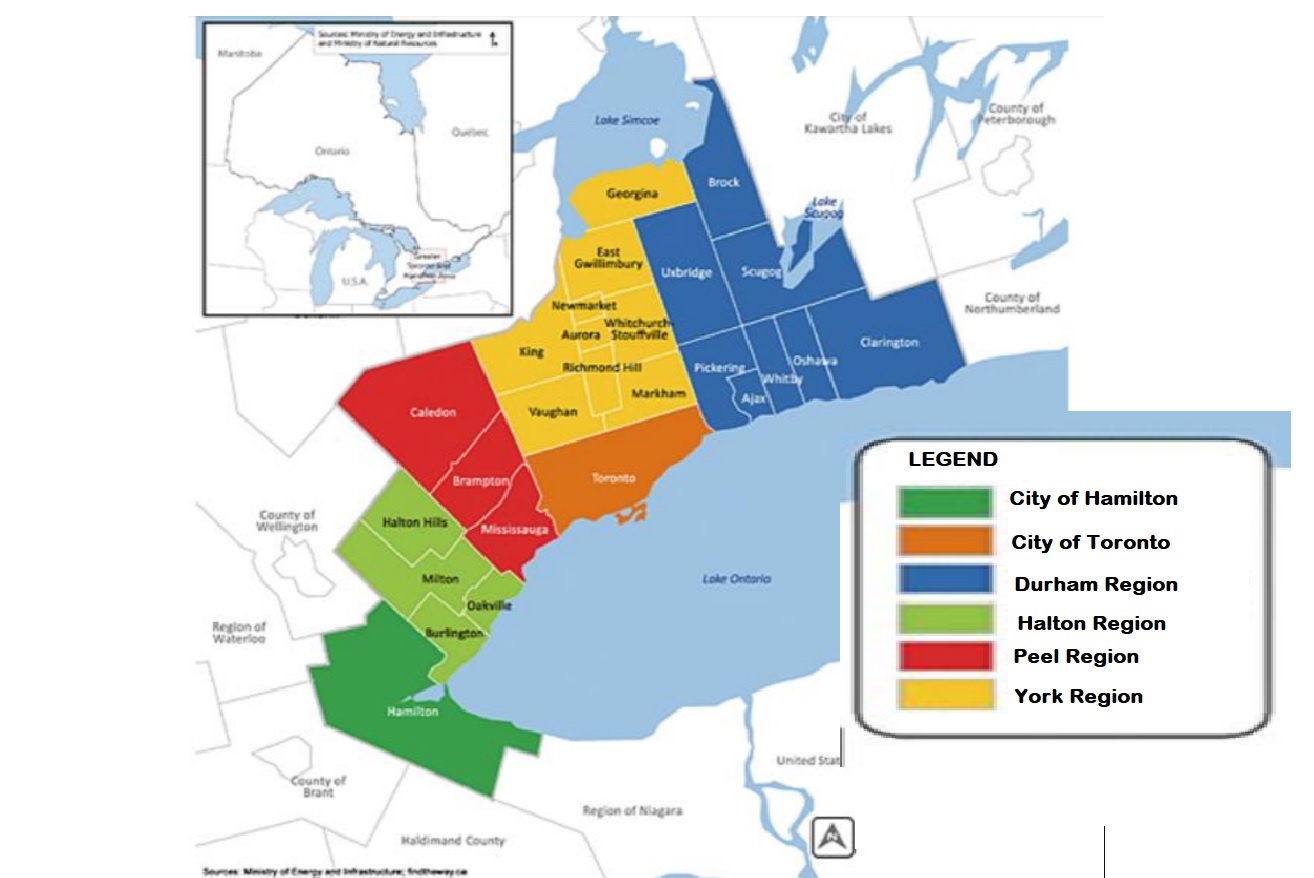 As Toronto grew, it began to need more space, so people began to fill in the surrounding areas.. This eventually became known as the GTA. In recent years as it continued to spread,into previously agricultural areas in all directions, the industrial city of Hamilton was added to become the GTHA, a huge contiguous urban conglomeration of several also expanding cities( Metrolinx annual report 2012-13, Govt of Ontario)

The study by the university’s Centre for Urban Research and Land Development (CUR), placed Montreal as sixth fastest growing area of the 20 on the list. It was preceded by four other American urban centres, the Dallas region in second, followed by Phoenix. Houston, and Atlanta areas. 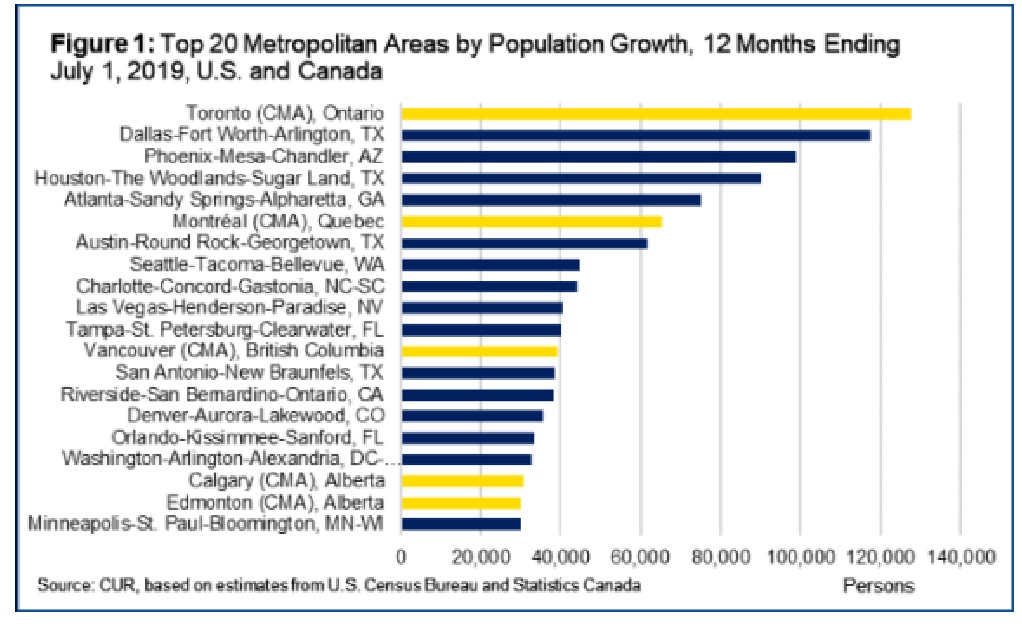 Perhaps surprisingly the largest metropolitan areas in N.America, New York, Chicago, and Los Angeles did not make the list as they all recorded population declines

In terms of the cities proper, five of the fastest growth cities in N. America were Canadian with Toronto again at the top followed by Montreal, Phoenix Arizona,  Calgary, Ottawa, and Edmonton. 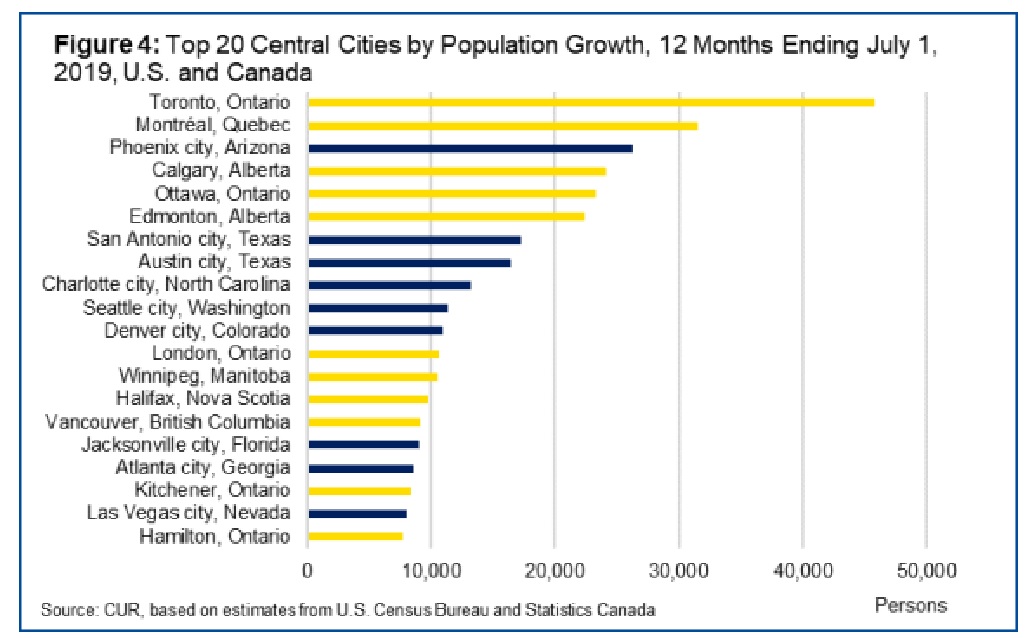 Toronto proper gained 45,742 residents in the survey year with most of the growth in the city and region coming from immigration  Toronto’s population is now almost 3 million, In 2016 the population of the GTHA was almost seven million.