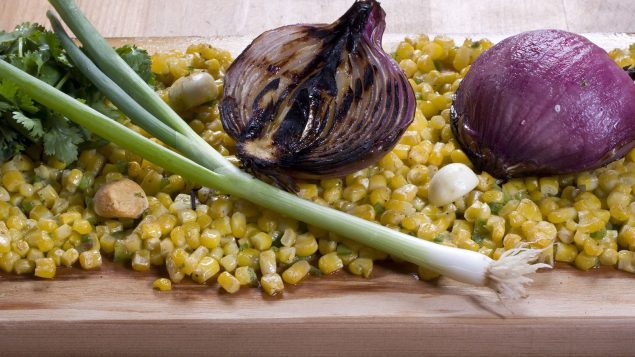 Cedar-grilled corn and red onion salsa is seen in this April 6, 2010 photo. The Public Health Agency of Canada says that there are 506 confirmed cases of salmonella in Canada as of Sept. 14. (Larry Crowe/The Canadian Press/AP)

In the ongoing investigation of a salmonella outbreak in Canada linked to red onions from the United States, the Public Health Agency of Canada (PHAC) has reported an additional 49 illnesses since Aug. 31, according to a press release.

Two deaths have also been reported, but investigations have confirmed that salmonella did not contribute to the cause of death for both individuals.

“In Canada, based on the investigation findings to date, exposure to red onions imported from the USA has been identified as a likely source of the outbreak. Many of the ill individuals under investigation reported having eaten red onions before getting sick.”Public Health Agency of Canada

UPDATE: 506 confirmed cases in Canada. If you are unsure where a red/yellow/white/ sweet yellow onion was grown, do not eat it. Onions grown in Canada are not associated with this outbreak. Onions from the United States are under investigation. https://t.co/kQQiNTh7Gr pic.twitter.com/jbQqAJiCS2

Through a collaborative effort between public health and food safety partners in Canada and the U.S., the PHAC said that traceback information has found that the contaminated red onions are coming from Thomson International Inc.

As a result, the PHAC has advised Canadians to not eat, use, sell, or serve any red, white, yellow, and sweet yellow onions from Thomson International Inc., or any products made with those onions. They added that people should not eat onions if they are unsure of where they came from, or are unlabeled.

There is no evidence that onions grown in Canada are associated with the outbreak.

The Canadian Food Inspection Agency (CFIA) has already issued a number of food recalls for related products that come to Canada, and additional food recall warnings are possible.

Salmonella bacteria are found naturally in the intestines of small animals, birds and reptiles, and are most commonly transmitted to people when they contaminate food which usually comes from animals such as poultry, beef, milk, eggs as well as fruits, vegetables and herbs.