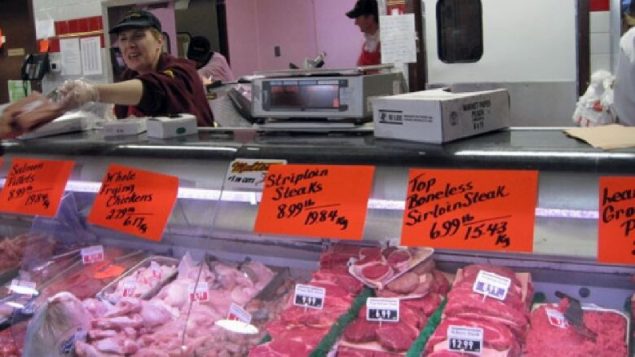 The CFIA says there is no evidence that food or packaging can transmit the COVID virus, nor do poultry and pigs ( Nicole Ireland-CBC)

A notice this week from the Canadian Food Inspection Agency (CFIA) says there is no evidence that food or food packaging can transmit SARS-CoV2 .

It says that there have been no reported cases of food or packaging being associated with transmission of the virus.

It also says there should be no fear related to the virus being transmitted by poultry or pigs.

In a separate release the CFIA noted, “Susceptibility studies led by CFIA scientists on domestic turkeys, chickens and pigs confirmed that these animals do not spread SARS-CoV-2, the virus that causes the COVID-19 disease, to humans, animals or the environment”.

This may come as good news to some consumers who have been mistakenly throwing out food over concerns it might harbour the virus.

A survey in late August for the Dalhousie University Agri-Food Analytics Lab conducted by Caddle asked over 8,000 Canadians about food habits during COVID-19. The result showed food waste has likely increased due to factors like overbuying, leaving food till it became date expired, and too much food on the plate.

However, another aspect showed as many as 10 per cent of respondents said they had thrown out food thinking it might be contaminated with COVID. The survey found the highest rate was in the mainly French-speaking province of Quebec where the figure jumped to 14 per cent with west coast British Columbia next at 13 per cent.

The survey said the food waste was potentially generating 20-24 thousand kilos of additional organic waste per month since the start of the pandemic.