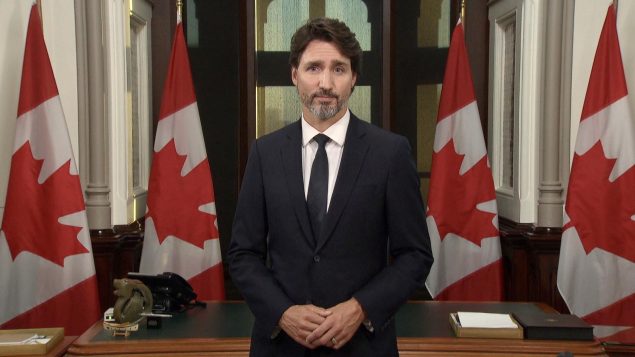 With the fate of his minority government hanging in the balance, Prime Minister Justin Trudeau took to the airwaves on Wednesday to rally Canadians in the fight against the pandemic and to shore up support for his plan to get Canada through the second wave of COVID-19.

Speaking to millions of Canadians in his evening televised address to the nation from his office in Ottawa, Trudeau warned that with the number of COVID-19 infections rapidly rising “Canada is at a crossroads.”

“In our four biggest provinces, the second wave isn’t just starting, it’s already underway,” Trudeau said, reminding Canadians that when the country went into lockdown in March there were only 47 new cases of COVID-19, while on Tuesday there were well over 1,000.

“We’re on the brink of a fall that could be much worse than the spring.”

With the numbers of infections rising rapidly, “it’s all too likely we won’t be gathering for Thanksgiving, but we still have a shot at Christmas,” Trudeau said.

“Together, we have the power to get this second wave under control,” he said.

“I know we can do it, because we’ve already done it once before. In the spring, we all did our part by staying home. And this fall, we have even more tools in the toolbox.”

Trudeau urged Canadians to continue wearing masks, download the COVID Alert app developed by federal health officials to help with better contact tracing, and to get vaccinated for the seasonal flu.

Canada is also much better equipped to face the second wave than it was in the spring, Trudeau said.

The federal government is signing deals on vaccines, on therapeutics, on personal protective equipment (PPE), he added.

“In fact, because we mobilized this spring, Canadians are now producing almost every type of PPE we need,” Trudeau said.

“We’re helping the provinces and territories ramp up their capacity on testing, while creating a federal Response Team for surge demand. And as soon as there’s approval for faster tests to be used safely, we’ll get them out across the country.”

Trudeau also tried to assure Canadians that the federal government will do everything in its power to protect the economy and help it weather the crisis.

“The federal government will have your back, whatever it takes, to help you get through this crisis,” Trudeau said.

Trudeau also acknowledged concerns about the country’s mounting debt as the Liberal government has accelerated deficit spending to shore up the flagging economy.

“I know some people are asking how we can afford to do all this for Canadians. That’s fair,” Trudeau said.

“Low interest rates mean we can afford it. And in fact, doing less would end up costing far more. Doing less would mean a slower recovery and bigger deficits in the long run.”

‘We must remain extremely vigilant’

Canada’s three main opposition parties addressed the nation following Trudeau’s comments, trying to offer a message of encouragement and support to ordinary Canadians, while also launching political attacks on the Liberals’ response to the pandemic.

Both Conservative Leader Erin O’Toole and Bloc Quebecois Leader Yves-Francois Blanchet, who have been diagnosed with COVID-19, delivered their remarks from self-isolation.

“The situation facing my family shows that we must remain extremely vigilant in our battle against COVID-19,” said O’Toole before pivoting to a wide-ranging critique of Liberal policy proposals outlined in the speech from the throne and Trudeau’s televised address.

O’Toole took the opportunity to slam the Liberal response to the pandemic, including the government’s foot-dragging in approving rapid COVID-19 tests that have already received regulatory approval in countries such as Germany and Japan.

Blanchet lambasted the Liberals for falling short on supports for seniors and meddling in health and education that fall under provincial jurisdiction, and said his party wants to see increased federal health transfers to the provinces.