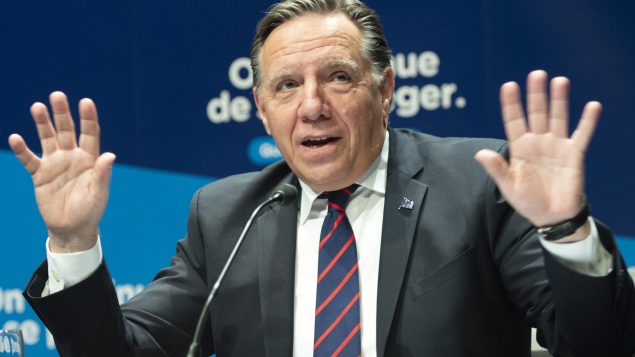 Quebec Premier François Legault speaks to reporters during the COVID-19 media briefing today in Montreal. A day after new restrictions took effect across three regions of the province, health officials reported the highest daily number of cases since early May. (THE CANADIAN PRESS/Ryan Remiorz)

The coronavirus refuses to let up in Quebec and Ontario

COVID-19 showed no signs of loosening its ever-tightening grip in central Canada on Friday as Ontario and Quebec–the country’s two most populous provinces–announced new–and higher–case counts.

Quebec reported its highest daily number of cases since early May: 1,052, including seven people who died.

That brought the total number of confirmed cases in the province to 76,273, including 5,857 deaths.

Meanwhile, Ontario reported a record 732 infections–well above the record it set earlier this week.

The province has now recorded 52,980 confirmed cases, including 2,927 deaths.

The two provinces account–by far–for the largest number of cases in the country, whiich has recorded 162,319 confirmed cases, including 9,402 deaths.

Though Legault’s directives left many in Quebec confused, Ontario Premier Doug Ford followed suit today, albeit in less drastic fashion, announcing that the province is pausing the concept of social circles and advising people to limit close contact only to people living in their own household and to maintain two metres of physical distancing from everyone else.

People who live alone, he said, may consider having close contact with another household. 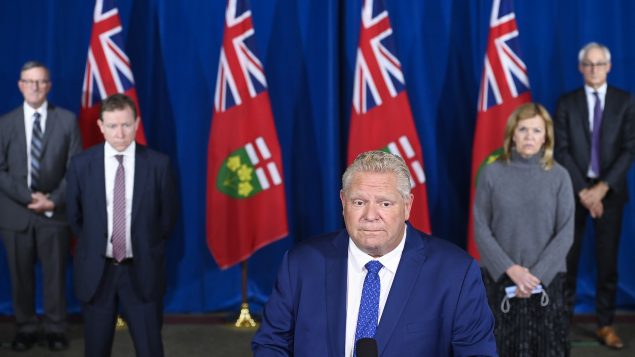 A glum Premier Doug Ford is pictured with his medical team at his press conference today at the the provincial legislature as he announced new restrictions to fight the COVID-19 pandemic. (THE CANADIAN PRESS/Nathan Denette)

Ford announced new restrictions for restaurants, bars, banquet halls and gyms in Toronto, the Peel region and in Ottawa.

As of Saturday, bars and restaurants will not be allowed over 100 patrons, with only six people allowed at a table, and banquet halls will be capped at 50 people.

Group fitness classes will be limited to 10 persons and 50 people will be allowed in gyms at the same time.

As well, Ford announced that Ontario will make significant changes to the process of getting COVID-19 tests

As of next Tuesday, tests will be by appointment-only and assessment centres will stop offering walk-in tests, beginning this Sunday

Ford said the changes are an effort to allow Ontario’s network of labs to work through a backlog of tests that has now reached more than 90,500.

“Anything we can do to limit gatherings of people within confined spaces will help stave off further spread of this virus and prevent illness and deaths,” association CEO Doris Grinspun said in a release.