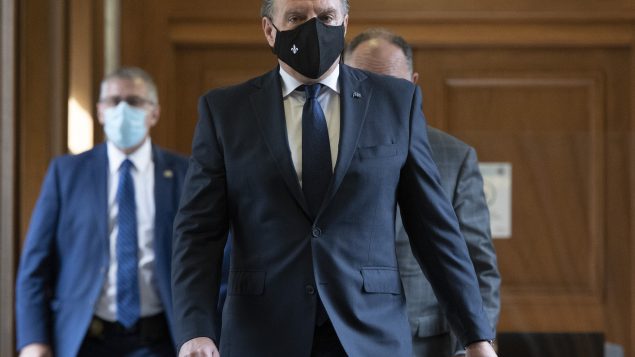 Quebec Premier François Legault is seen on his way to a news conference on the COVID-19 pandemic on Tuesday at the legislature in Quebec City. (THE CANADIAN PRESS/Jacques Boissinot)

People across wide swaths of Quebec woke up to a new government mandate this morning: obey restrictions and measures put in place to combat COVID-19 or face some very stiff fines.

The restrictions and measures apply to the province’s red-zone hotspots–Montreal, Quebec City and the Chaudière-Appalaches region (east of Quebec City and known historically as the “Beauce”)–all three of which were put put on high alert on Monday.

Schools will remain open, the CBC’s Isaac Olson reports, as will hair salons, hotels and similar businesses, as well as gyms and indoor swimming pools.

Libraries will remain open to borrow books only.

To help the estimated 12,000 businesses forced to close, the Quebec government is making $100 million in financial aid available.

Most of the directives were announced on Monday, but just hours before they were due to kick in at midnight, Premier François Legault told an early-evening press conference why and how he was going to back them up. 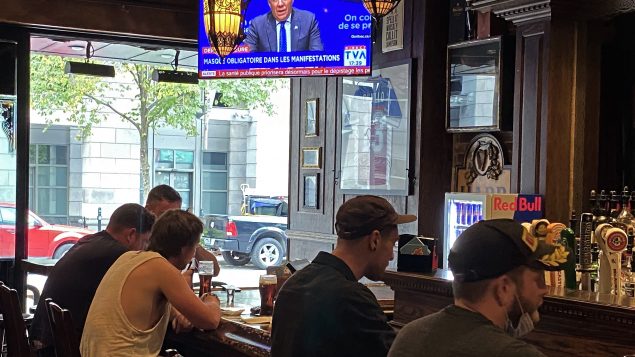 People sit at a bar in downtown Montreal as Premier Francois Legault holds a press conference on television on Monday, announcing anti-COVID-19 measures. Bars are now closed across three regions in the province, including Montreal. (THE CANADIAN PRESS/Ryan Remiorz)

“Lives are at stake. We want to keep our children in schools,” he said.

“We also want to protect our health network.”

Police, Legault said, will be issuing $1,000 fines to those who violate the rules and–with fees–the fines will rise to over $1,500.

And he said police are now authorized to demand proof of residency and if residents refuse entry, officers will be able to obtain a warrant from a judge by phone, allowing them to enter houses and hand out tickets.

“I want to be very clear: the police are not going to start knocking at random on every door in Quebec,” Legault added.

“There will be no witch hunts.”

Legault said all gatherings will be banned, even outside in public parks.

“Police officers will start by trying to disperse the gatherings, but if people don’t cooperate, fines can be given,” he said.

Quebec made masks mandatory inside public spaces in July and there have been several anti-mask demonstrations since, including last night. 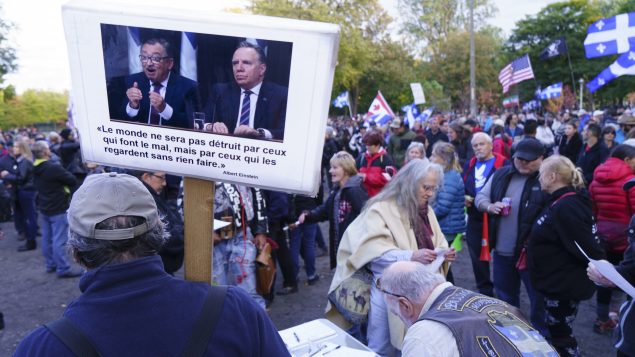 But a poll in September suggested almost a quarter of Canadians believed warnings from public officials and medical experts were overblown.

That poll also found that about 57 per cent of respondents said they had eased their adherence to one or more of public health safety measures over the previous month.

Since the start of the pandemic, Quebec has suffered the most cases of COVID-19 in Canada–with 74,288 confirmed cases; 5,834 persons have died.

On Wednesday, authorities reported 838 new cases in the province but no deaths.