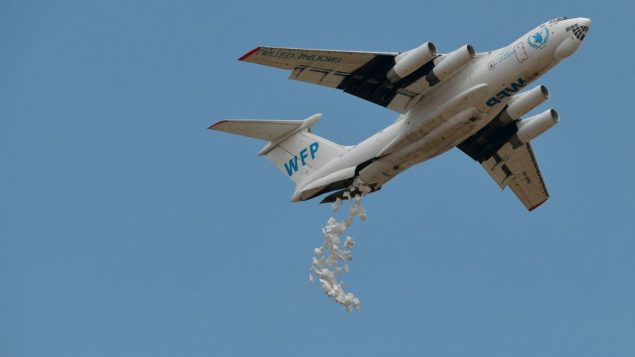 A Russian-made Ilyushin transport aircraft leased to the World Food Programme (WFP) makes a drop of food aid near a village in Ayod county, South Sudan, on Febr. 6, 2020. (Tony Karumba/AFP via Getty Images)

Canada deserves its share of recognition for its help in combating world hunger, the United Nations World Food Program said Friday after the organization won the 2020 Nobel Peace Prize.

“Canada has really had an important role and Canada really shares in the recognition of this honour, and that’s because they’ve always been there, they have supported us over the last 50 years, they’ve been a very important donor, especially in the last 10 years,” Marshall said in an interview with Radio Canada International.

Canada has supported the UN food agency by providing it with predictable multiyear funding, supporting WFP’s work on gender and through school feeding programs, Marshall said.

“But they’ve also given us timely contributions when we need it the most in emergencies,” she said. “So when there has been a conflict and WFP had to react overnight, they’ve been there to support us.”

Because the WFP is fully reliant on voluntary donations, Marshall said Canada’s continued contributions are essential to feeding the rising number of hungry people in the world.

“Going forward we hope Canada will continue with this support, they’ll continue to support us through our humanitarian work, through emergencies, but also through our development work,” Marshall said.

Marshall says the COVID-19 pandemic has made that job harder because the WFP now estimates it will have to feed 138 million people, up from 100 million it had previously estimated.

The WFP is predicting a funding shortfall of $6.4 billion for 2020. The Norwegian Nobel Committee awarded the peace prize to WFP for its work in helping feed hundreds of millions of starving people in conflict zones around the world in the midst of the pandemic.

The prize is giving the UN agency a platform and puts the world’s hungry at the centre of that platform, Marshall said.

‘Peace and hunger, we need to address both’ 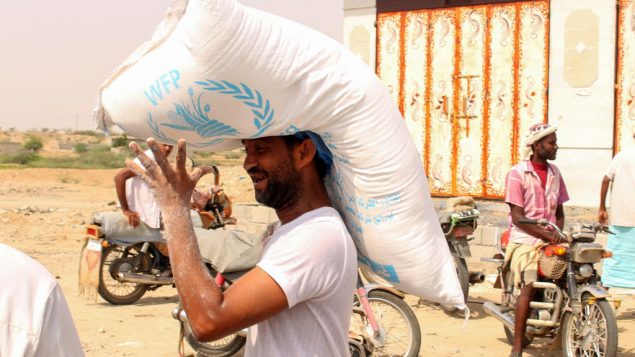 Displaced Yemenis from areas near the border with Saudi Arabia carry World Food Programme (WFP) food aid, which according to local officials was stored and now is being distributed, in the northern district of Abs in the country’s Hajjah province, on July 8, 2019. (Essa Ahmed/AFP via Getty Images)

“People must understand we will not reach that goal of zero hunger until there is peace,” Marshall said.

“What we need to do to keep peace is also to make sure the millions of people that go to bed hungry every single night have food. The two pieces need to go together – peace and hunger, we need to address both.”

The Nobel commission said in its statement that it was recognizing the WFP “for its efforts to combat hunger, for its contribution to bettering conditions for peace in conflict-affected areas and for acting as a driving force in efforts to prevent the use of hunger as a weapon of war and conflict.”

David Beasley, the organization’s executive director, said in a statement that the award for his organization is a reminder of the suffering of the people it tries to help.

“Today, the Norwegian Nobel Committee has turned the global spotlight on them and on the devastating consequences of conflict.”