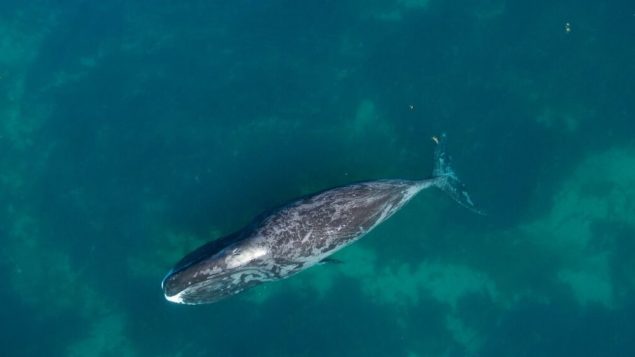 A study of Bowhead whales in the Arctic show they spent the early morning feeding in deep water and then rested in shallow, coastal waters during the afternoon. Other study suggest shallow water is a method of protection from killer whales (LGL Limited, UBC, VDOS Global, Fisheries and Oceans Canada and WWF-Canada)

A group of Inuit hunters have come across the carcasses of four beached bowhead whales in the high Arctic.

The group was hunting polar bears about 60 kilometres north of the Nunavut community of Kugaaruk when they came across the carcasses of the bowheads, two of which appeared to be younger whales.

Photos taken by the group and analysed by a Fisheries and Oceans Canada  (DFO) researcher says it appears they could have been attacked by killer whales.

The carcasses showed rake-like gouges on one body which may have been caused by a polar bear or by an orca attack, but one whale had a damaged tongue. DFO researcher Steve Ferguson says the tongue damage is consistent with known killer whale attacks where one orca will pull down on a bowhead lip, opening the mouth of the baleen whale so others in the pod can get at the fatty tongue.

Hunter Rene Kukkuvak of the community near Bothia Bay told Nunatsiak News, “We never have killer whales in our bay. This is something new,” 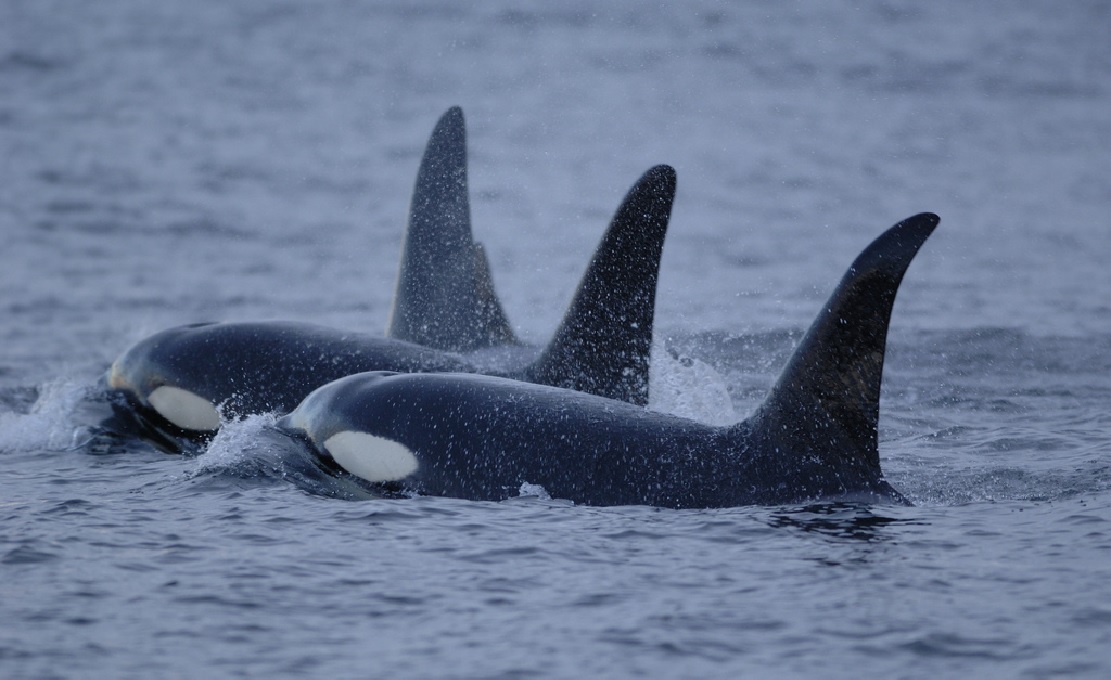 A pod of killer whales. Typically with their high dorsal fins they avoid ice, but as the Arctic warms there is evidence they are expanding their range northward (NOAA Photo Library/Creative Commons

Unlike other whales, bowhead whales don’t have a dorsal fin which is believed to be because they often dive under ice and  in order to breathe, can use their massive heads to break through a relatively thick layer of ice up to 60cm according to some Inuit reports.

Although they are roughly twice the size of a killer whale, they are slow moving and their defensive technique against pods of killer whales is reported to be to flee into ice or into shallow water. Ferguson was a co-author of a scientific report indicating bowheads seek areas of sea ice or shallow shore water when orcas are present. Orcas with their tall dorsal fin, avoid ice.  The orcas also typically attack younger, smaller bowheads. An earlier study in 2009 also indicated similar behavior even though areas of heavy sea ice would result in poor foraging for the bowheads. 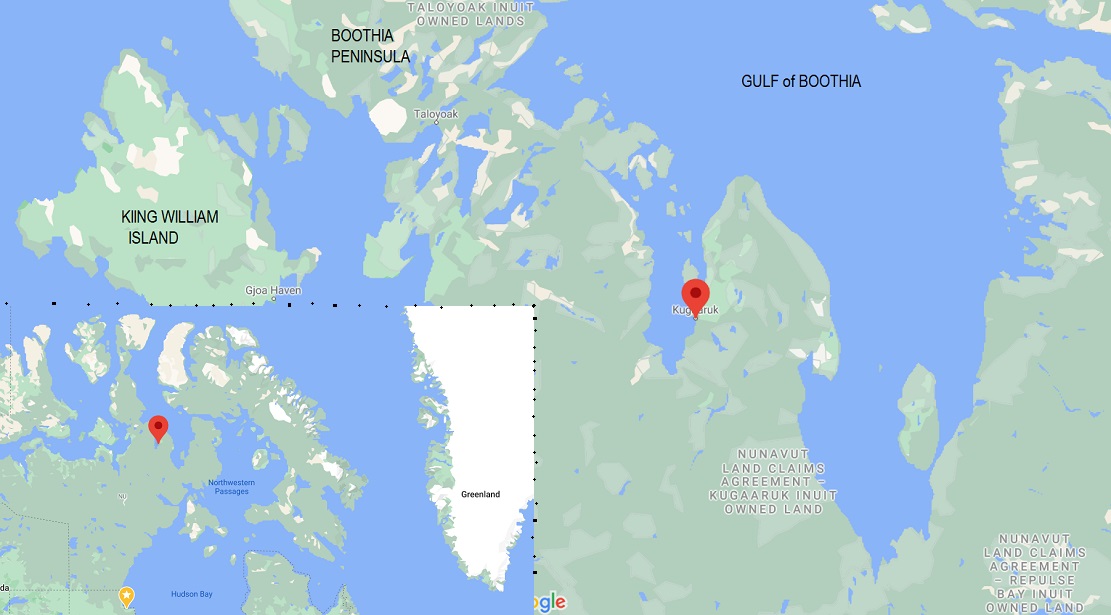 However, Kukkuvak told Nunatsiaq News, that there is no ice present in the bay this year.  The U.S, National Ocean and Atmospheric Administration (NOAA) reported  the second lowest Arctic sea ice minimum of the 42 year record in September.

The lack of ice cover suggests that the bowheads may have had no other option but to flee into shallow water, and so possibly ended up stranding themselves.  Ferguson says this may be speculation. 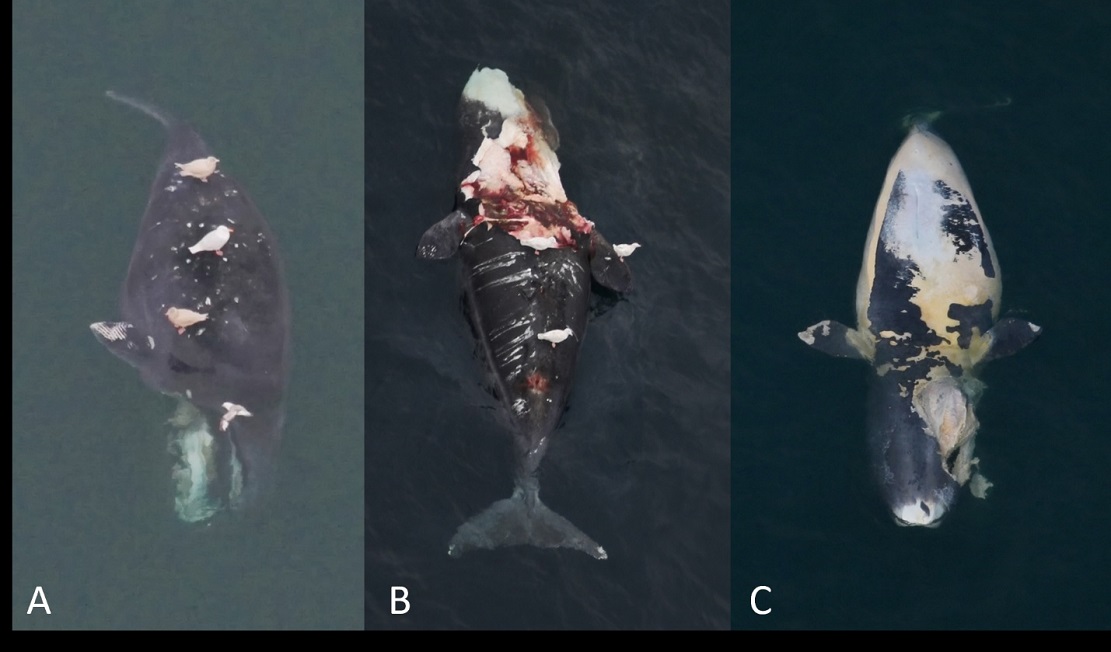 (A) The 2015 bowhead calf carcass that provided the first evidence of killer whale predation on a bowhead whale in the U.S. Pacific Arctic. Note rake marks on the calf’s flipper, mouth and jaw . (B and C) Carcasses of young bowhead whales with lethal injuries to the mouth and jaw from killer whale attacks. Photo credit: NOAA Fisheries. Funded by the Bureau of Ocean Energy Management.

Quoted by Newsweek Magazine he said, “This is the first sighting of washed up bowhead in the Prince Regent Inlet and Gulf of Boothia region that I have heard of—however, this may be partly due to the lack of people living and using this area—really it is only Kugaaruk in the entire region.”  He added however that perhaps the whales were killed in one area and floated on to the shoreline as bowhead carcasses, being fatty, float as opposed to sinking”

There have been suggestions that the lack of ice has allowed orcas to expand their range northward and Ferguson told Newsweek, “”We don’t have strong evidence that the numbers of killer whales have increased in the Arctic but this is likely. However, we do know that with the loss of sea ice, killer whales have expanded their summer range farther into the Canadian Arctic and that they spend more time in the region now that sea ice does not impede their movements.”