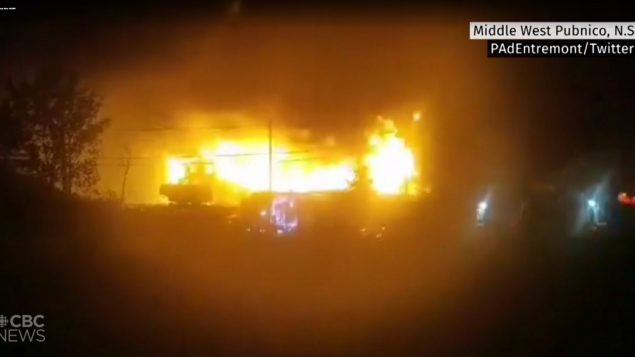 A suspicious fire destroyed a lobster pound where Mi'kmaw fishers had stored their catch. (twitter via CBC)

Violence escalates at the weekend in Nova Scotia lobster dispute

The ongoing dispute between Indigenous fishers and local commercial lobster fishers entered a new and violent chapter on the weekend.

A lobster pound where Indigenous had stored their catch was burned in a suspicious fire, and one man, police call a “person of interest” is in hospital with life threatening injuries.

The dispute over fishing rights has been on and off over two decades. Red balloon indicates Saulnierville and nearby Weymouth on St Mary’s Bay, N.S. where the latest flare up is occurring, part of the federally regulated lobster fishing area 34 ( google)

This comes after weeks of protests and altercations between the two groups. It comes as the Indigenous Mi’kmaw started their own ‘regulated’ commercial lobster fishery although the federally regulated season is closed. Local commercial fishers say this ‘fishing out of season’ will harm the  stocks pointing out the reason the fishery is closed at this time is because this is when lobster mate and molt, producing new shells and is a necessary conservation policy. 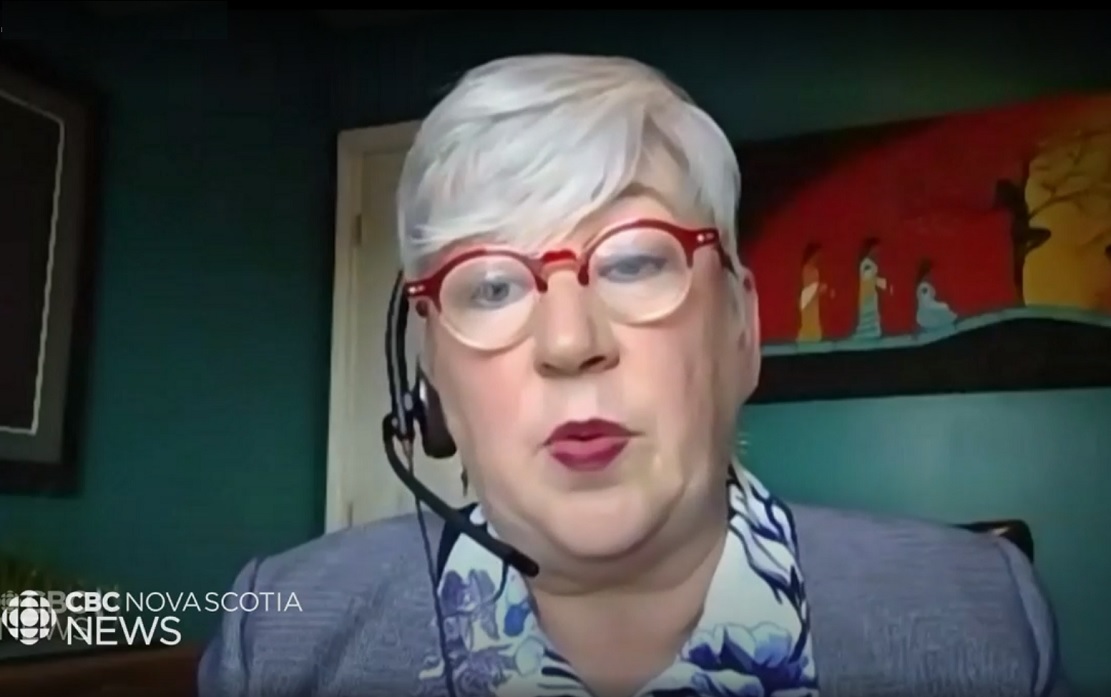 Fisheries Minister Bernadette Jordan said in a recent CBC interview that it is not appropriate to have commercial fishers involved in “nation to nation” talks between the federal government and Mi’kMaw, adding that she has however ongoing conversations with the non native fishers. She and federal government have come under criitism from all sides saying a multi-year long lack of action is what has led to the conflict. (CBC News)

The Department of Fisheries and Oceans says the average decrease in the enitre LFA34 over the period is six per cent but adds the St. Mary’s Bay situation is  “not dissimilar to that observed in others areas of Lobster Fishing Area 34 during the same period.”

Accusations have been made on both sides against each other and against the police. The commercial fishers are upset saying the police are not enforcing the law (closed season) while the Mi’kmaw say the police are not protecting them from threats and violent acts. 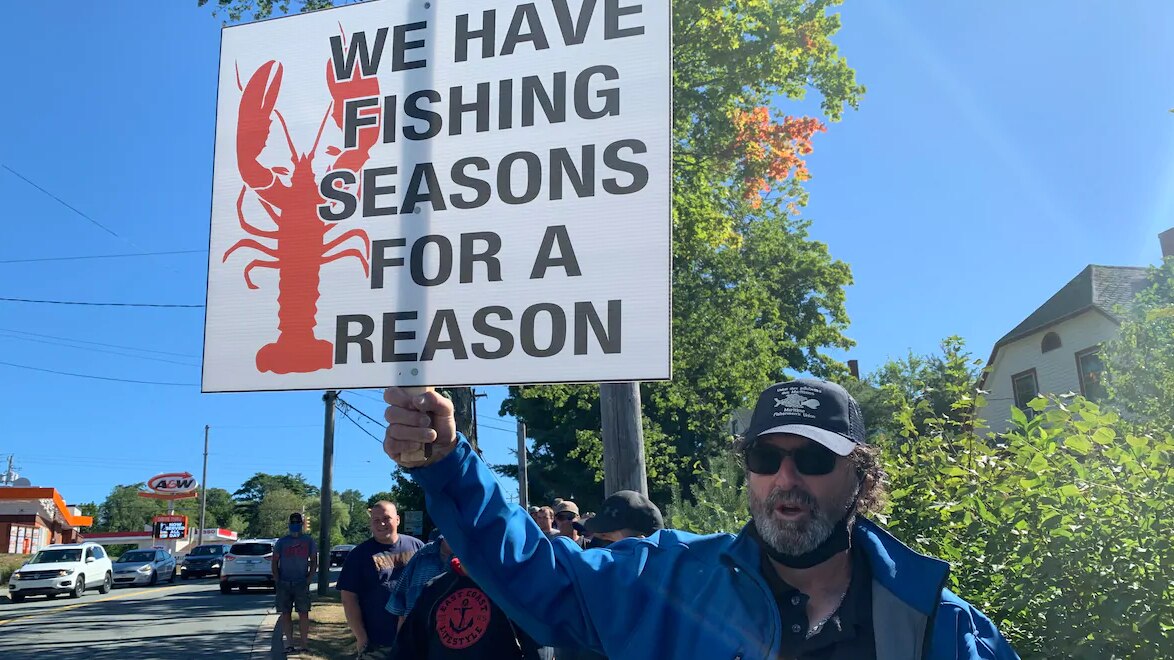 An angry but relatively peaceful protest earlier his month of commercial fishermen who have been demanding that the federal government stop the Mi’kmaw from commercial harvest and sale lobster outside the commercial season, which is closed for conservation reasons (Paul Withers/CBC)

The Mi’kmaw say the Supreme Court of Canada (1999) showed they have a right to a “moderate livelihood” from fishing, but because that’s never been defined, it’s become a point of contention.  A later SCC decision said the government could pose restrictions on that right, such as for conservation reasons, but should justify it.

Discussions on the situation have taken place, but the federal government and Mi’kmaw have excluded the commercial fishers. Sipekne’katik First Nation Chief Mike Sack ,quoted by CTV said, “We’re not negotiating with them, we’re discussing our management plan with them,”

As a result of the increased tensions over the last two weeks and especially the weekend fire, several politicians have now called for an emergency debate in Parliament and more police have been assigned to the area. 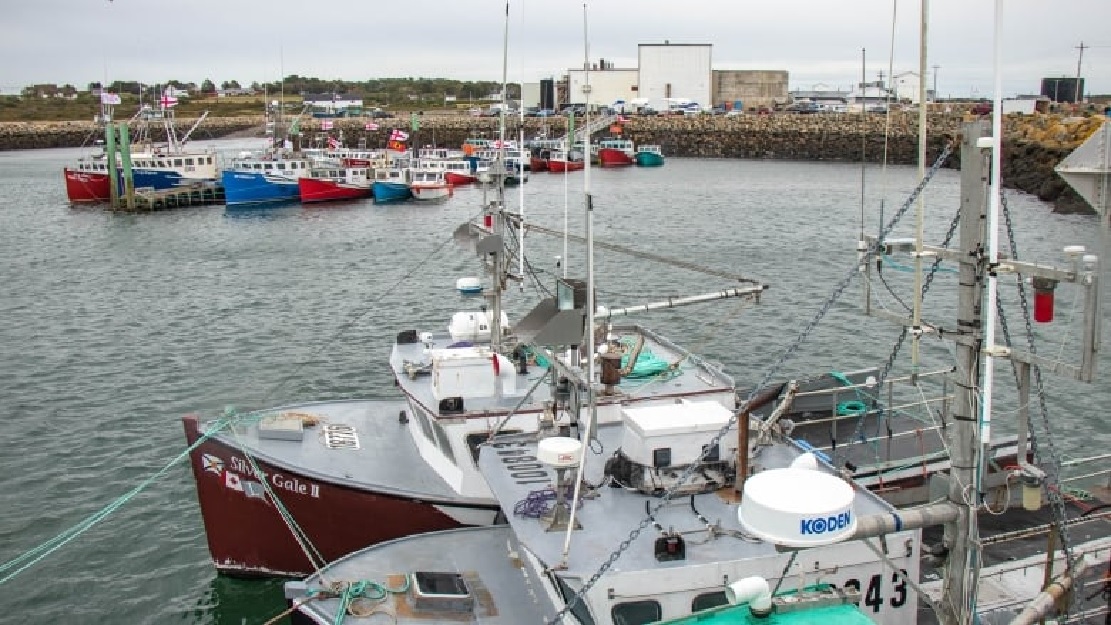 Sipekne’katik First Nation fishing boats tied up at Saulnierville wharf on Sept. 22, 2020. The Mi’kmaw have started their own regulated commercial fishery outside of the federally regulated one. (Robert Short/CBC)

The head of the commercial fishers, Joel Comeau stepped down on Friday as president of the Maritime Fishermen’s Union Local 9 in Nova Scotia saying he no longer felt safe, He told CBC radio that the he was concerned for his own and his family’s safety and the verbal and possible physical attacks were too much. “After four years of working on this file and fighting for the fishermen and fighting with [Department of Fisheries and Oceans], I decided that it was too much of a toll on my family. We’ve been followed around the community”

Chief Sack quoted by the Canadian Press was also upset, blaming the commercial fishers for “taking the law into their own hands” adding more than police are needed, “They’re doing whatever they want and getting away with it. We need the military to come step in to keep the peace.”

Bernie Berry is president of the 1,000 member Coldwater Lobster Association. Quoted by the Canadian Press, he said “To date, there have been no meaningful face-to-face negotiations with fishing organizations representing licensed fishers,” said Berry. “Unless this happens, anger and frustration on both sides will continue to run high”.

In Ottawa, Parliamentary speaker Anthony Rota will decide whether requests for an emergency debate on the situation will proceed