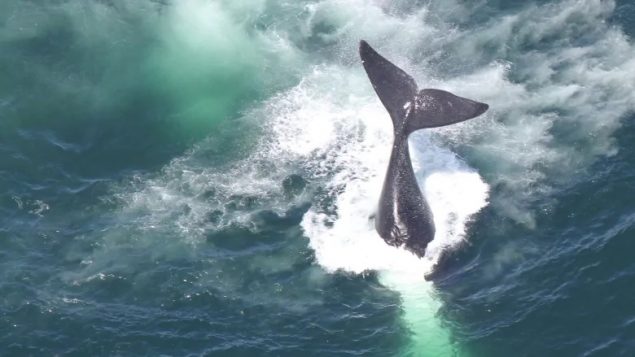 The research found that current speed restrictions for ships moving through Canadian waters will not prevent the whales from being killed if they are struck.

There are currently just 356 North Atlantic right whales left in the world, according to an estimate released in October–an estimate that prompted Oceana Canada to call on the governments of Canada and the United States to take immediate action to save them from extinction. 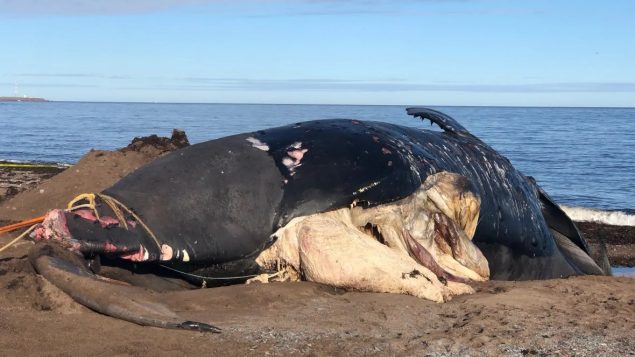 A necropsy determined that this right whale–seen from the rear and towed to Cape Breton, Nova Scotia last year–was killed by a ship strike. (CBC/Gary Mansfield)

And, the latest study finds, more needs to be done if the whales are to survive.

“Slowing big ships down does not reduce the death rate as much as we hoped it would,” says Sean Brillant, a senior conservation biologist with the Canadian Wildlife Federation and a co-author of the study from Halifax’s Dalhousie University and published in Marine Mammal Science.

Brillant says larger ships obeying current speed restrictions in the Gulf of St. Lawrence still have an 80 per cent chance of killing a whale if the whale is struck.

“Although the speed restrictions … are probably helping to reduce the chance of killing whales, it’s not going to solve the problem. It’s not enough,” Brillant told the CBC’s Emma Davie.

The other big takeaway from the research, Brillant told Davie, is that relatively small ships can also kill these mammals.

“These vessels can’t get just kind of a free pass and we assume that they’re harmless,” he said.

“People who are skippers of these vessels need to know that they can damage whales and, of course, be on the lookout and look for opportunities to avoid that.”

Fisheries and Oceans Canada has introduced measures to try to protect the right whales, including the closing of large areas to fishing and imposing a mandatory 10-knot speed restriction throughout much of the Gulf of St. Lawrence for vessels over 13 metres.

Davie reports that fishing gear entanglements and ship strikes are listed as the two most frequent causes of death for right whales and that between 2017 and 2020, there were 45 observed right whale deaths in U.S. and Canadian waters, but, Davie writes, scientists believe the actual number is likely much higher.