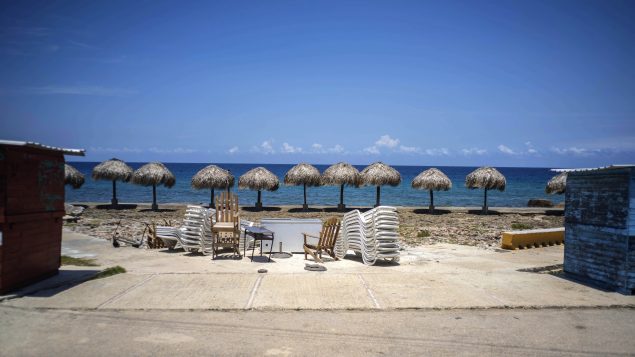 A beach in Cuba sits empty in August because of the amid the new coronvirus pandemic, but Canadians are now making their way back to Caribbean destinations, according to report by CBC News. (The Associated/Ramon Espinosa)

Canadian snowbirds keep heading south despite warnings and the pandemic

Despite the pandemic–or maybe because of it–a whole lot of Canadians are heading south to sunny foreign destinations in and around the Caribbean these days, even as government officials and public health experts say everybody would be a whole lot better off if they stayed home.

Apparently, it’s not all that easy to clip the wings of a determined snowbird–even if heading south might very likely result in more than a few dirty looks from neighbours.

As RCI’s Levon Sevunts reported Thursday a poll released by the non-profit Angus Reid Institute this week found that a majority of Canadians support a prohibition on discretionary travel and that two-thirds of Canadians would prohibit all personal travel if the decision were up to them.

An investigation by CBC News finds that Canadians by the thousands are heading south despite the worsening pandemic and warnings that they should avoid all “non-essential travel” outside the country. 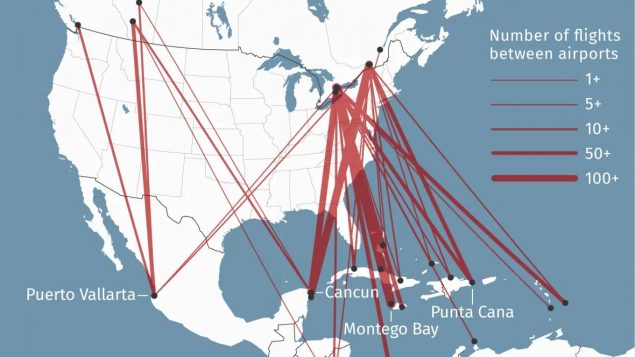 Flights south abound and a lot of Canadians are getting aboafrd. (CBC News/Flightrader24.com)

CBC News tracked Canadian non-stop flights to and from popular resort destinations using data from Flightradar24.com between Oct. 1, 2020, and Jan. 16, 2021 and found that despite a dramatic drop last spring, air traffic to Mexico and the Caribbean is rebounding.

In a story published Friday, Dave Seglins, Joseph Loiero and Roberto Rocha report that of 1,516 flights analyzed, some of the most popular routes departing from Canada included 214 flights between Toronto and Montego Bay, Jamaica, and 183 flights between Montreal and Cancun, Mexico.

“Who are these people?”  you may wonder.

Raywat Deonandan, a professor of epidemiology at the University of Ottawa, told CBC News the data suggests a small portion of the Canadian public is choosing to disregard public health advice, putting themselves and the countries they visit at risk.

“I try not to judge people. Everyone’s got their reasons,” he said.

“Maybe they need, you know, some kind of stress relief.”

Deonandan added for that many people to be knowingly acting against public health advice, there is likely some selfishness at play.

“This sense that my need for recreation is greater than the need of the population to remain safe,” Deonandan said.

While the federal government is asking Canadians to “avoid non-essential travel outside of Canada,” it lacks the teeth to make it mandatory.

“It’s up to the individual to decide,” says Health Canada. 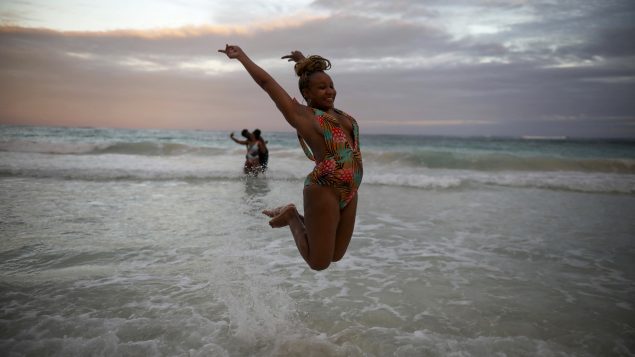 An tourist poses for a photo while jumping in the air photo in the shallow waters of a Mexican earlier this month. Plenty of Canadian snowbirds are making their way back south to Caribbean beaches despite warnings that it’s not a good idea to leave Canada during the pandemic. (The Associated Press/Emilio Espejel)

Seglins, Loiero and Rocha report that the Public Health Agency of Canada has flagged potential COVID-19 exposures on almost 500 international flights since Dec. 1.

Of those, 87 flights were to or from the southern vacation destinations used in the CBC’s analysis.

“While known cases in Canada linked to international travel represent only one per cent of the country’s overall case count, experts caution that still represents 4,239 exposures and contacts tied to a traveller,” Seglins, Loiero and Rocha write.

But, as Seglins, Loiero and Rocha report, experts say those tests are not 100 per cent reliable and that people should not assume they can control their exposures abroad.