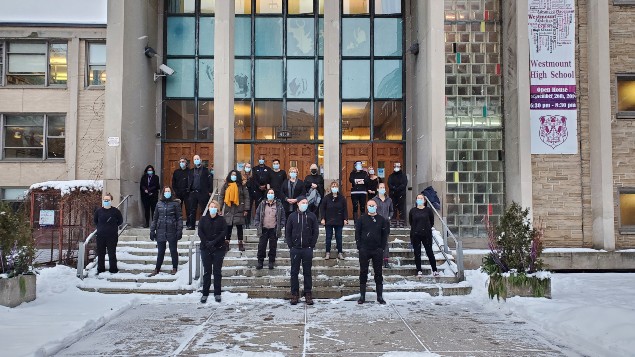 Over 20 teachers at a Montreal-area high school wore black to protest the province of Quebec’s measures to grapple with the COVID-19 infection rate. (Robert Green)

As high school students returned to class in the province of Quebec, teachers at a Montreal-area high school wore black to protest what they call the government’s “reckless abandonment of science-based decision making” during this pandemic. 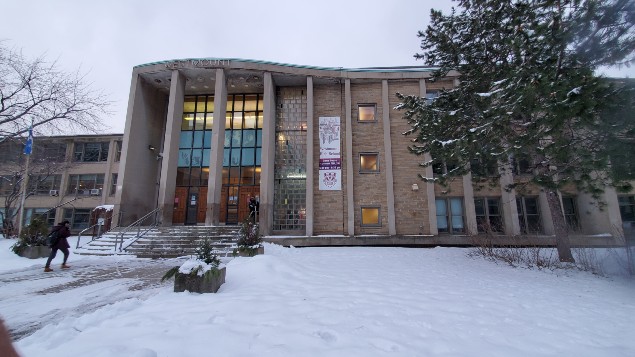 The government of Quebec decided to have high school students return to class on January 19, 2021 and they must wear surgical masks at all times. (Robert Green)

Protesting teachers call on others to join them

Teachers at Westmount High School wore black upon their return to class after a lengthy Christmas break and they are inviting other high school staff across Montreal to do the same. They say “that by reopening schools during a massive spike in community transmission it (the government) is ignoring the advice of one of the world’s top expert bodies.”

They quote The Harvard Global Health Initiative that recommends schools be closed in the event that community infections exceed 25 per 100,000. On January 9, 2012, there were 77 cases per 100,000 in Montreal, more than three times that level. The World Health Organization states that schools being open did not lead to a rise in community spread where infection was low. It adds, “the risk of outbreaks (in schools and camps) rises when community transmission is high.”

The teachers say “the government began the year denying the evidence regarding the efficacy of masks to prevent transmissions in schools” and “more recently denied the evidence regarding the efficacy of air purification systems and rapid testing in preventing transmission.” They also say they are mourning the end of the public health care system’s ability to care for all Quebecers during this crisis.  The Quebec government has asked hospitals to begin training health care workers on implementing a protocol to help them decide who should be treated should resources become so limited that not all patients can be treated.

Protesters call for a resumption of online learning

In a statement, the protesters say: “While we are also extremely concerned for the well-being of our students, we fail to understand how the challenges our students face could be given priority over the lives of Quebecers and the ability of our healthcare system and its workers to cope with this crisis.”

There has been great variation across Canada in the kinds of limits to businesses, social gatherings, restaurants, mask wearing and school attendance, and rules continually change depending on the changing levels of infection.  Quebec is the only province so far to have imposed a curfew. Viewers watching national news reports of restrictions in different jurisdictions could be forgiven for being confused and fed up.