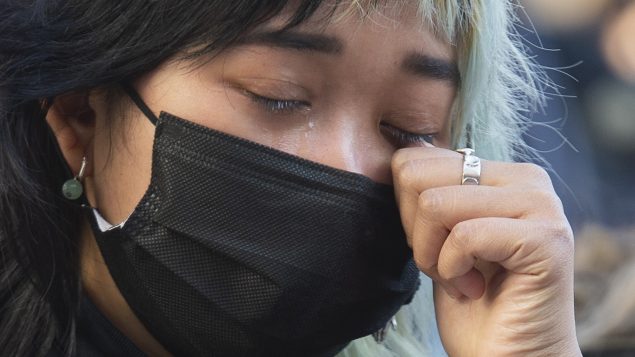 A woman sheds tears during a vigil in Montreal last Sunday to highlight anti-Asian racism and to remember those who have suffered from it. A new report on Tuesday prompted one human rights advocate to call the problem has reached a "crisis point" in Canada. (THE CANADIAN PRESS/Graham Hughes)

A new report paints an ugly picture of anti-Asian racism in Canada–a problem that one human rights advocate says has reached a “crisis point.”

The government-funded report entitled, “A Year of Racist Attacks: Anti-Asian Racism Across Canada One Year Into The COVID-19 Pandemic,” was released Tuesday by the Toronto chapter of the Chinese Canadian National Council.

“Asian Canadian communities not only face the challenges of COVID-19 (the social, economic and health implications of which has disproportionately impacted racialized communities) but also the added racism that sees our communities as somehow responsible for COVID-19 and its horrific damages,” the report states.

Saying the problem was at a “crisis point.” Marie-Claude Landry, chief commissioner at the Canadian Human Rights Commission, called the report “a chilling reminder that racism, hatred and intolerance have no borders.” 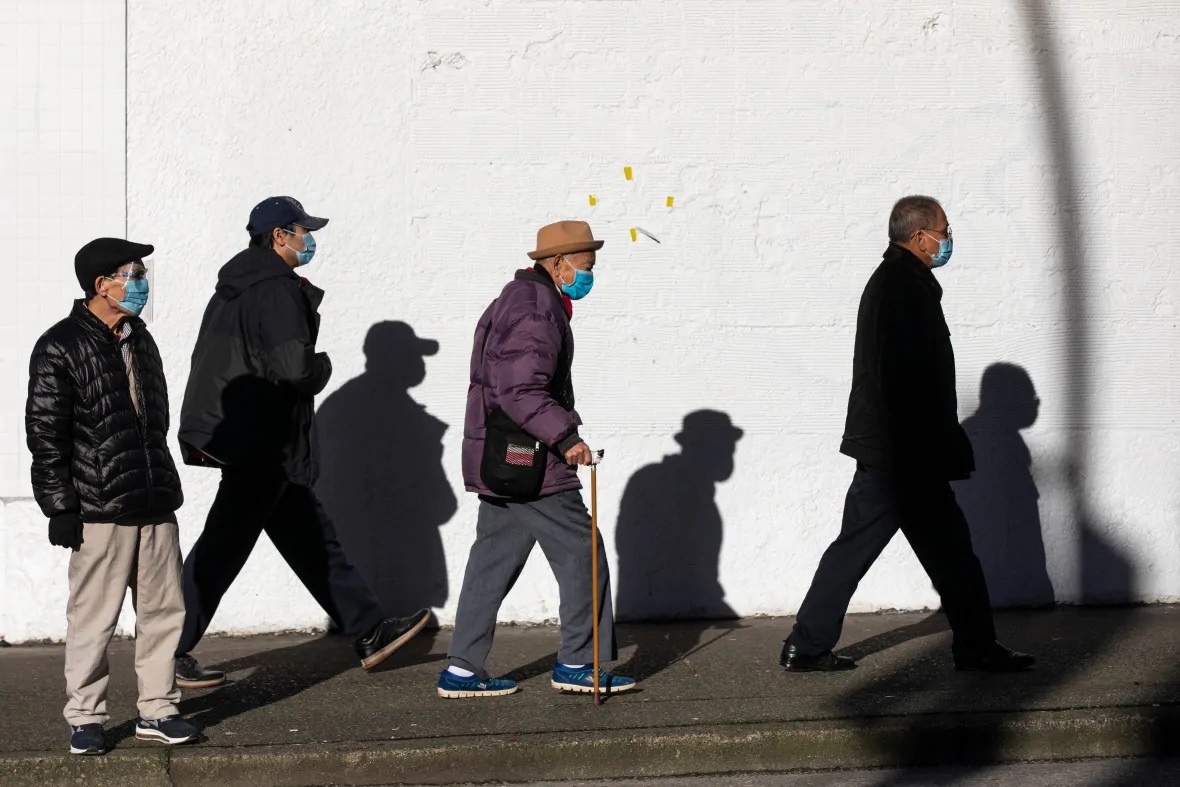 Pedestrians are pictured in Vancouver’s Chinatown neighbourhood. In February, Vancouver police confirmed that anti-Asian attacks had increased 717 per cent over the past year, from 12 to 142 cases. (CBC/Ben Nelms)

Landry made the comments at a news briefing in Toronto to unveil the findings in the report, which detailed 1,150 attacks reported through online platforms such as Fight COVID Racism and Elimin8hate that targeted members of Asian-Canadian communities between March 10, 2020 and Feb. 28, 2021.

The report found that a majority of those targeted reported it was because they were being scapegoated for COVID-19.

It also found that the rate of the incidents has increased in 2021: 507 of the 1,150 reported incidents took place in the first two months of this year.

“Racism has always been a part of growing up in Canada,” said Justin Kong, executive director of the Chinese Canadian National Council’s Toronto chapter. 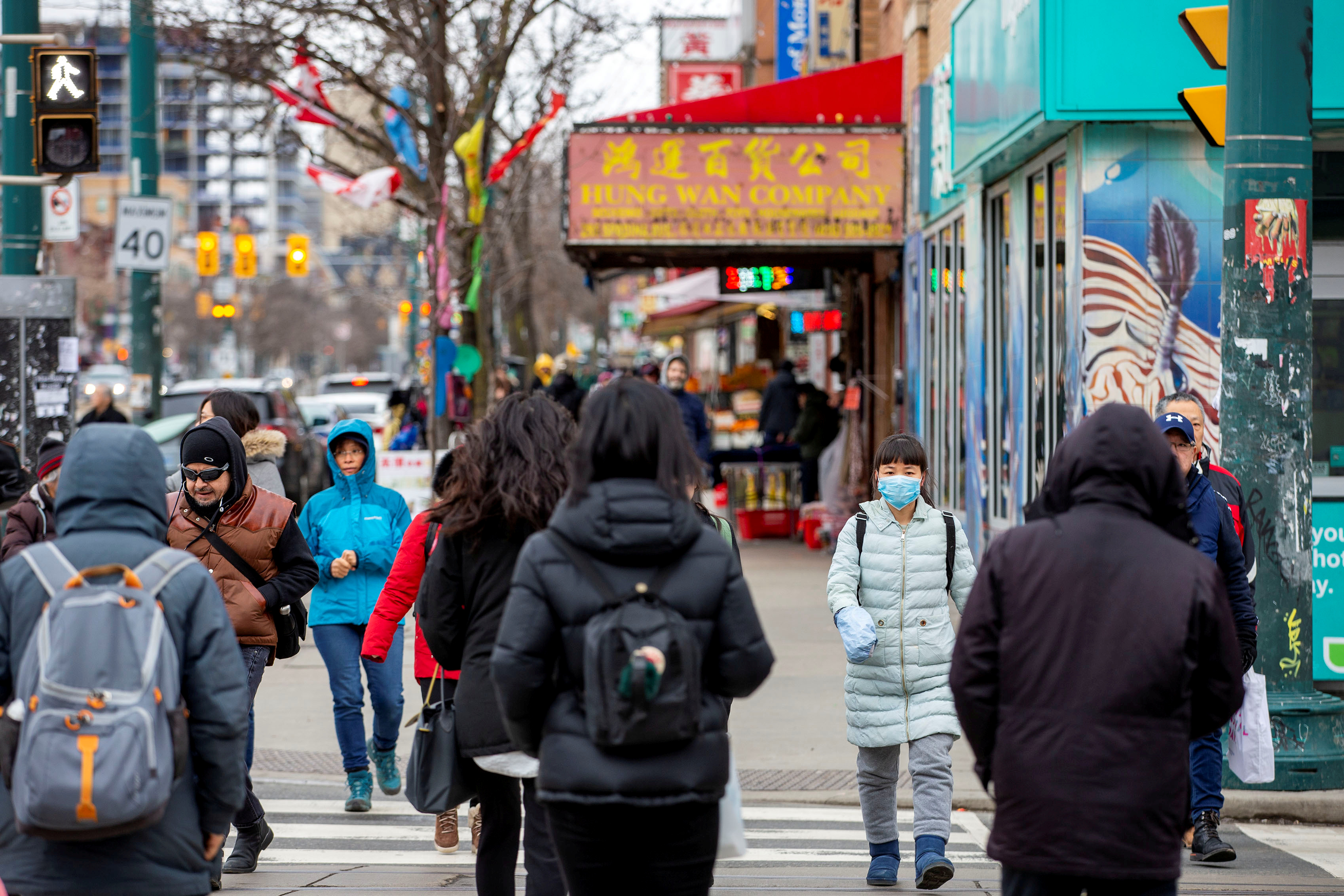 According to the report, the incidents included verbal harassment (73 percent), physical assault or unwanted physical contact (11 percent), and being coughed on or spat on (10 percent).

Asian-Canadian women were targeted in about 60 percent of all incidents while 42 per cent of children and youth under 18 years of age said they had been physically assaulted and 57 per cent of seniors and people above 55 years of age also reported a physical assault.

“As Asian Canadians, our lives have been taken over by a constant sense of paralysing fear,” said Avvy Go, a lawyer and clinic director of the Chinese & Southeast Asian Legal Clinic in Toronto.

“Asian-Canadian women like myself face an even greater risk of attack and regardless of whether we’re a newcomer or fifth-generation Canadian, our sense of security has been shattered,” she said.

“Slash by slash, wound by wound, each one of these incidents takes away from all Asian Canadians our sense of safety, robs us of our basic dignity, and ultimately undermines our sense of belonging in a country that we have every right to call home.”

The report found that elderly people, young people and those in low-income jobs or who did not speak English were more vulnerable to attacks. 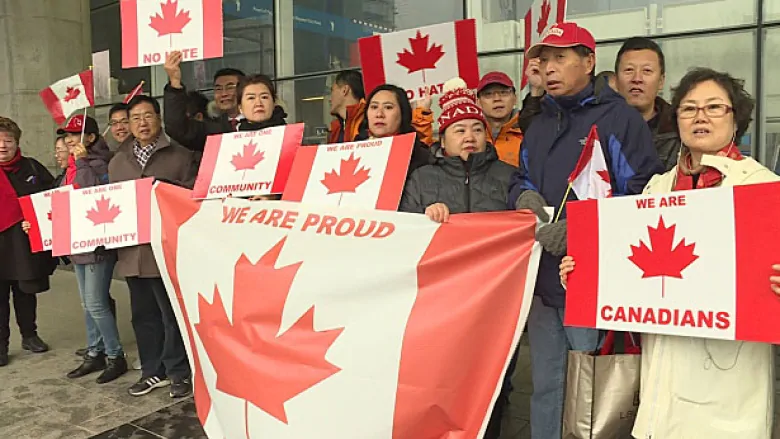 Dozens of Richmond, B.C., residents gathered in 2016 at a SkyTrain station to rally against anti-immigration, racist flyers that were circulating in the community. (CBC/Tina Lovgreen)

According to the data, most incidents occurred in public spaces such as parks, streets or sidewalks.

Restaurants, grocery stores and other food-sector locations were the site of nearly one-fifth of the incidents.

Nearly 10 per cent of the reported cases took place on public transit.

The report found that 73 per cent of respondents felt mental distress and emotional harm as a result of the attack, while 8.4 per cent of incidents resulted in physical harm.

Forty-four percent of the incidents were in British Columbia and 40 percent were in Ontario.

A Statistics Canada study last July found that nearly 30 per cent of Chinese participants said they experienced an increase in race-based harassment or attacks since the start of the pandemic.

Last September, the Chinese Canadian National Council published a report that found there are more anti-Asian racist incidents reported per capita in Canada than in the U.S.

Asian-Canadian groups are calling for concrete action from all levels of government to address the problem.

“While the prime minister has spoken up publicly, we have not seen a parliamentary motion to put this in our Parliament so that there is a clear condemnation of hate against Asians,” said Amy Go, a social worker and president of the social justice wing of the Chinese Canadian National Council.

“Without that kind of clear commitment, I’m very worried that this is just going to continue without much attention.” 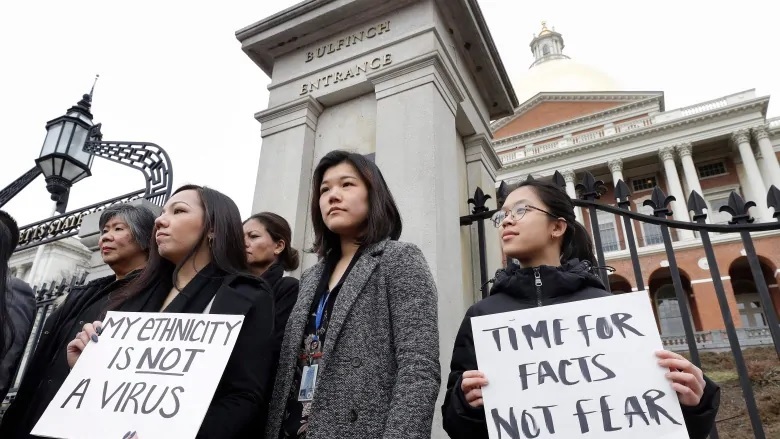 Hate crimes against Vancouver’s Asian communities began to increase in the early days of the COVID-19 outbreak and organizers and participants at the Vancouver Asian Film Festival (above) tried in May to shine a spotlight on the problem with an online video campaign. (The Associated Press/Steven Senne)

On Monday, Parliament unanimously passed a motion introduced by NDP Leader Jagmeet Singh to condemn and commit to doing more to stop anti-Asian racism, but the motion is non-binding.

Last week, a number of community groups across Canada released a joint statement calling for an end to anti-Asian racism and for more to be done to protect sex workers and migrants after eight people, including six Asian women, were shot and killed in Atlanta, Georgia.

This past Sunday,  hundreds of people gathered in Montreal to call attention to anti-Asian racism in Canada and to remember those who have suffered from it.