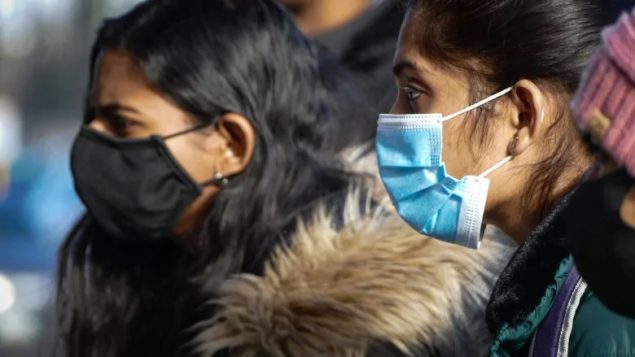 People wear masks in Winnipeg in November. Months later, the pandemic continues to spread and more restrictions are arriving as Canada continues to battle COVID-19 and its variants. (CBC/Lyzaville Sale)

More restrictions are announced as COVID refuses to let up

Ontario Premier Doug Ford announced this afternoon he was imposing a stay-at-home order that will take effect at 12.01 a.m. tomorrow morning and last 28 days.

The order makes it illegal to leave a place of residence, except for essential reasons such as work, school, trips to a grocery store or pharmacy and for health-care reasons.

“To boil it down as simple as possible, folks please stay home unless it is for an essential reason,” Ford told a press conference. “The situation is extremely serious and we just need to hunker down right now, we need to limit mobility.

The order will close all non-essential retail stores except for curbside pickup.

Only grocery stores and pharmacies will be permitted to stay open for customers to shop indoors. 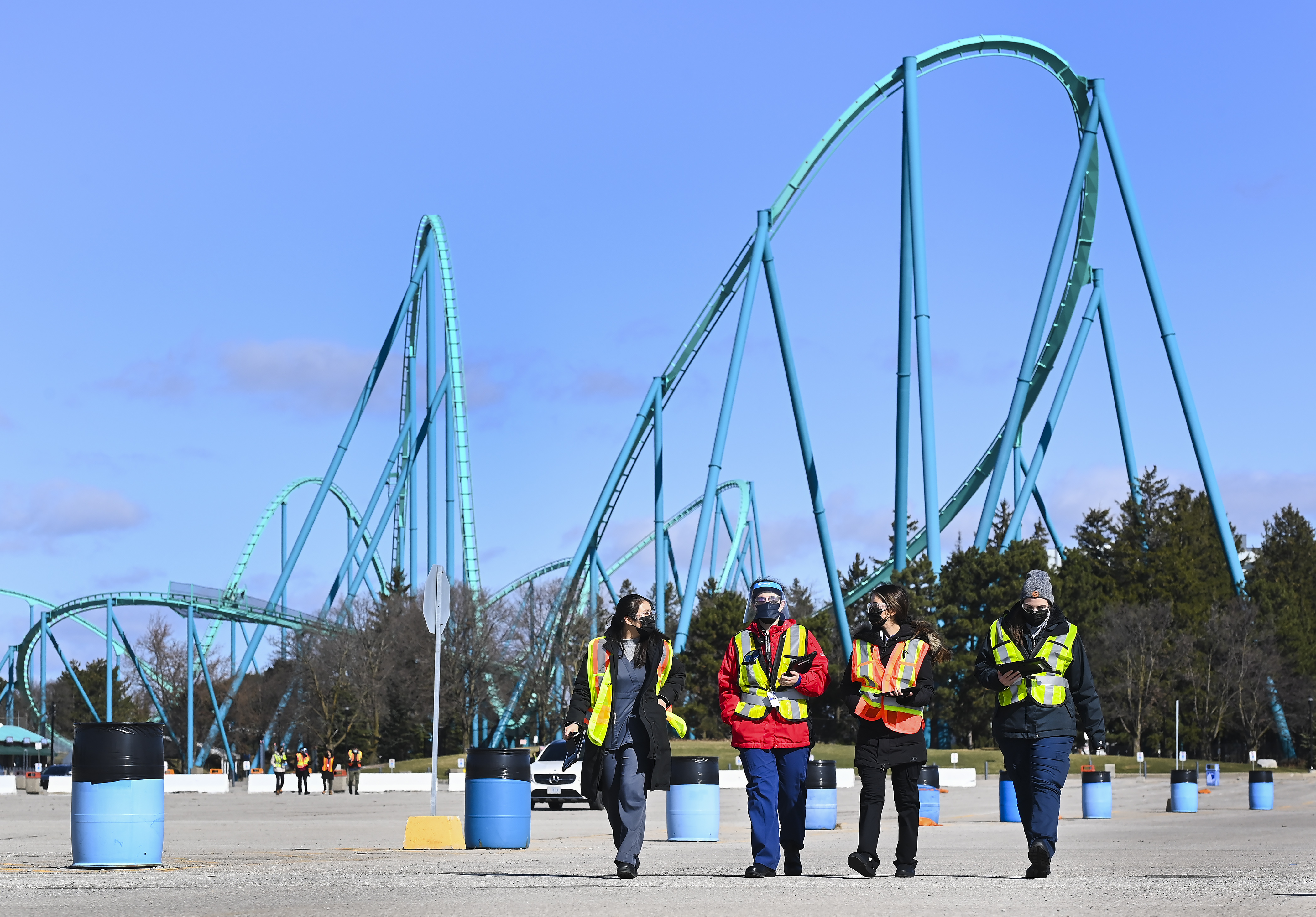 Health-care workers get ready to take patients at a drive-thru COVID-19 mass vaccination site at Canada’s Wonderland during the COVID-19 pandemic in Vaughan, Ont., on Monday, March 29, 2021. People didn’t have to leave their vehicles to get their dose of the vaccine. (THE CANADIAN PRESS/Nathan Denette)

Big box retail stores, meanwhile, will be restricted to selling only grocery and pharmacy items for in-person shopping.

Shopping malls are limited to curbside pickup through appointment and delivery.

Even though three of Ontario’s public health units–Toronto, Peel Region and Wellington-Dufferin-Guelph–have already done so, Ford said the province will not be closing schools and child-care facilities.

On Tuesday, Toronto’s public health agency ordered schools in the country’s biggest city to close, as of today.

Toronto Public Health said child-care centres attached to schools will be allowed to open but won’t be allowed to accommodate students whose classes were closed under the order.

The closure means more than 300,000 students in Toronto, including those who attend private or independent schools, will return to learning from home exclusively.

The new restrictions follow Ford’s announcement last Friday that he was imposing “emergency brake” measures to combat the pandemic.

Ontario reported 3,215 new cases of COVID-19 on Wednesday–the most on a single day since Jan. 17.

Hospitalizations stood at 1,397, with 504 patients in intensive care units. 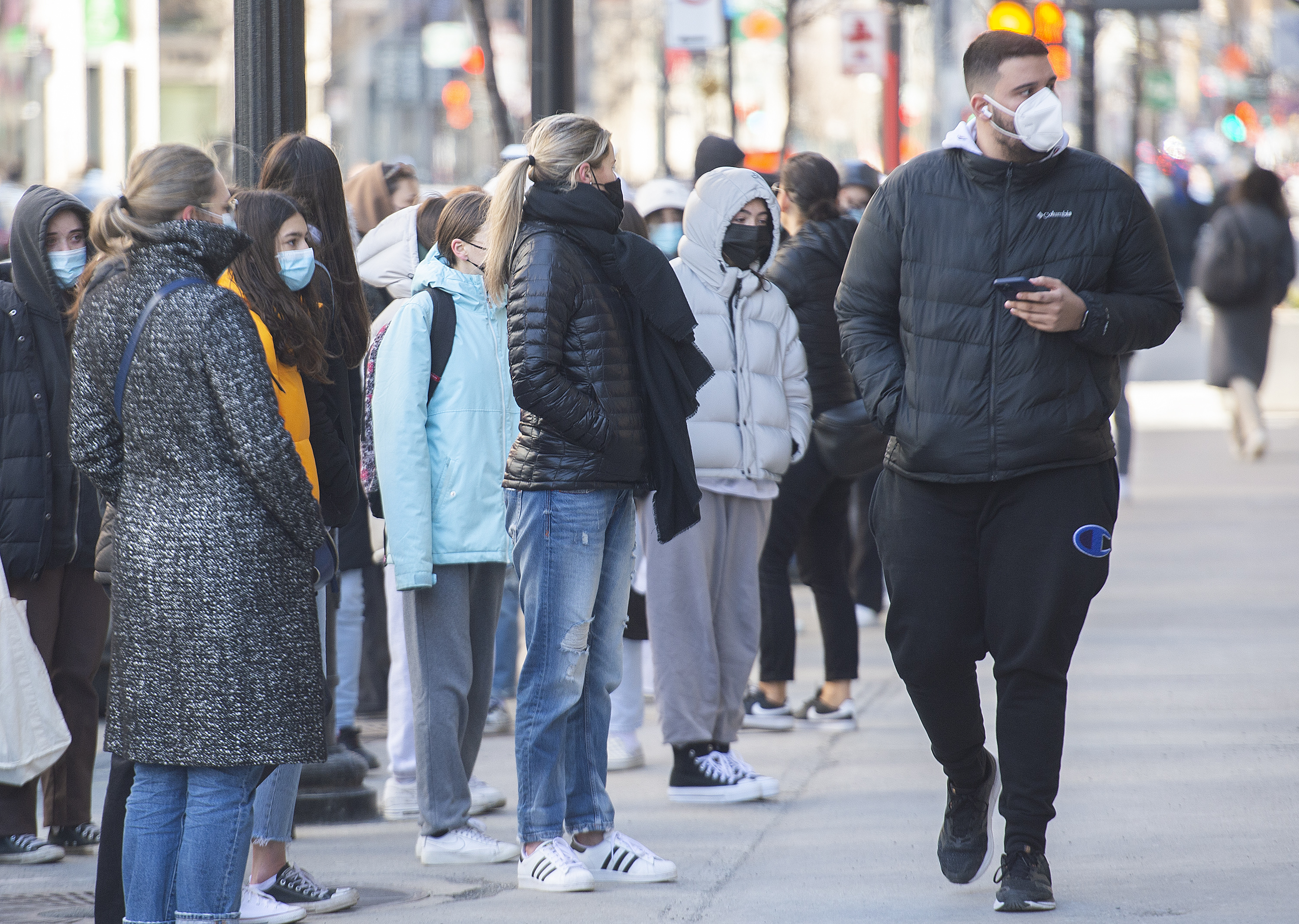 People wear face masks as they wait to enter a store in Montreal last Friday. (THE CANADIAN PRESS/Graham Hughes)

Gyms in red zones–that include Montreal–will close Thursday and places of worship will be limited to 25 people at a time.

As well, beginning next week, high school students in Secondary 3, 4 and 5 will again attend class on alternating schedules while extracurricular activities will also be stopped as some have proven to be sources of transmission, according to Legault.

In red zones, under the province’s colour-coded set of restrictions, pools and skating rinks will be allowed to stay open and individual sports will continue to be permitted, Legault said.

Legault said a 9:30 p.m. curfew currently in place in the Montreal area will not change, but the government may decide to move it back to 8 p.m. if the situation doesn’t improve.

“The situation is under control. However, we are keeping a very close eye on it from one hour to the next,” Legault said. “The month of April is going to be a critical, crucial month.”

Quebec reported 1,168 new cases on Wednesday and four more deaths. Officials said there were 543 people in hospital, including 123 in intensive care. 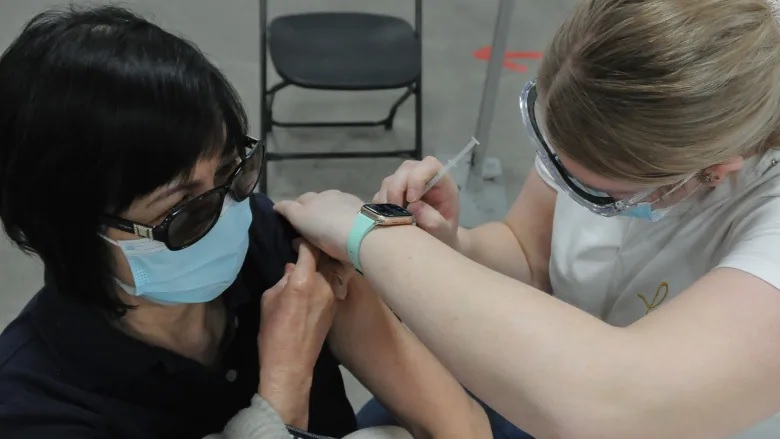 Further west,  Alberta Premier Jason Kenney said Tuesday that–as of Friday–customer capacity in retail stores will be lowered to 15 per cent, restaurants must close to in-person dining, and low-intensity group fitness activities will once again be banned.

Kenney acknowledged decisions to shut down indoor dining, curb indoor fitness and reduce retail capacity will meet resistance, even within his own United Conservative Party and caucus, according to a report by The Canadian Press.

Officials said the number of cases over the Easter long weekend grew by about an average of 1,000 per day.

According to the province, there were 328 people in hospital with COVID-19, including 76 in intensive care units.

“To be blunt: this wave is here,” Kenney said, noting that current trends would threaten the “maximum capacity of our health-care system by next month, right when we’re reaching critical mass of vaccination.”