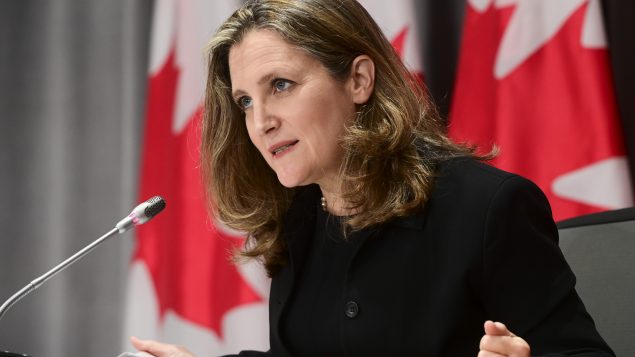 A new report by an independent Canadian think-tank is calling on the Liberal government to raise the federal sales tax and drastically cut its proposed $100-billion stimulus package to get a handle on Canada’s ballooning deficit.

The report warns that the “unprecedented” response by the Trudeau government to the health and economic crises caused by the COVID-19 pandemic “have upended Canada’s fiscal policy framework.”

“The federal government’s fiscal supports cushioned the economic impact, but have left the country without a plan for restoring fiscal stability,” the report says.

“As the health crisis abates, Canada faces two related challenges: implementing measures conducive to a strong economic recovery and reducing government debt to levels that are economically sustainable and fair to Canadians in the future.”

The report estimates that the total deficit for the last two fiscal years will reach more than $420 billion, or about 20 per cent of Canada’s gross domestic product (GDP), “the highest among all advanced economies and seven percentage points higher than the average for G20 countries.”

The report expects that by 2023 the federal government’s accumulated deficit will be roughly double what was projected before the crisis, reaching 56 per cent of the GDP.

To help Ottawa chart its way out of this sea of red ink, the report proposes a two per cent hike in the federal Goods and Services Tax (GST), a reversal of the expansion of employment insurance, and a reduction in corporate tax rates. It also calls on Freeland to cut by a third its proposed $100-billion stimulus package among other things.

The report envisages balancing the budget by 2026 and bringing Canada’s debt-to-GDP ratio below 30 per cent by 2041.

“Through a combination of policies to stimulate the economic recovery and long-run economic growth, along with fiscal prudence, the plan should inspire investor confidence and maintain Canada’s credibility with credit-rating agencies and the public, necessary to avoid spiking interest rates,” the report says.

David Macdonald, senior economist with the Canadian Centre for Policy Alternatives, said while he agrees with the authors of the C.D. Howe report that the federal government needs to find new sources of revenue, hiking the GST is not the best way to go about it.

People with very high incomes can only buy so much, he said.

“You only need two pillows for a bed, you don’t need 50 even if you could technically buy 50,” Macdonald said. “And so in that regard people at the low end end up spending a lot more of their income on GST.”

A wealth tax of some kind and new tax brackets for people who earn more than $1 million a year would be a much better way to target people who have done really well during the pandemic, he said.

“I think that given the impact of the COVID-19 pandemic was very different depending on which sector you work in and how much you make,” Macdonald said. “If you did very well during the pandemic, and many people did quite well through the pandemic, those are the people we should be look to first to make up the deficit.”

On the other hand, Macdonald said he likes the idea of investment tax credit presented in the report.

“I actually think that if your goal is to encourage corporations to invest more in Canada in terms of capital goods, then the investment tax credit is a better approach for that,” Macdonald said.

Macdonald said he also agrees with the C.D. Howe Institute’s proposal for a comprehensive review of tax preferences, which are heavily skewed towards upper income Canadians.

What’s missing from the C.D. Howe Institute’s report is any mention of funding to improve long term care in Canada, as well as long-term reforms to the Employment Insurance system, Macdonald said.