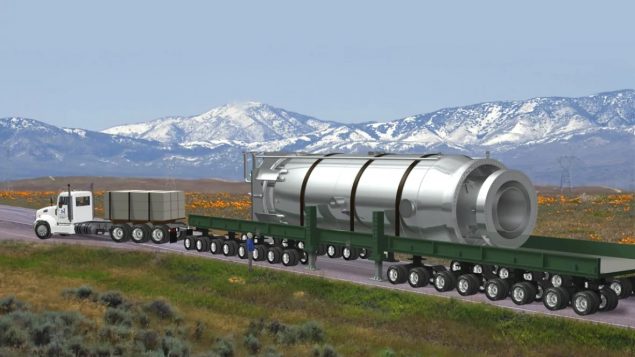 An illustration shows a NuScale Power Module on a truck. NuScale is one of the small modular reactor companies whose designs are going through the approval process with the Canadian Nuclear Safety Commission. Many are designed to be small enough to transport by truck or by shipping container. The premiers of four Canadian provinces are set to sign a memorandum today to explore the feasibility of using small modular nuclear reactors, or SMRs, as a clean energy option to reduce greenhouse gas emissions. (NuScale Power)

The premiers of four provinces are set to sign a memorandum today to explore the feasibility of using small modular nuclear reactors, or SMRs, as a clean energy option.

All four of the provinces–Alberta, Ontario, Saskatchewan and New Brunswick–oppose the federally-mandated carbon tax that took effect in 2019

Alberta Premier Jason Kenney, who announced last August he would sign the memorandum says small modular reactors could supply non-emitting, low-cost energy for remote areas in his province as well as industries that need steam such as the oilsands. 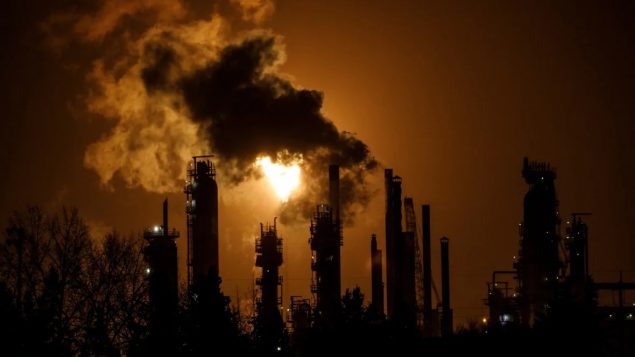 A flare stack lights the sky from the Imperial Oil refinery in Edmonton on December 28, 2018. The Liberal government has committed Canada to being carbon neutral by 2050. But it has released no plan for the three to four per cent annual cuts that it would take to get there. (THE CANADIAN PRESS/Jason Franson)

According to a report published Monday by the CBC’s John Paul Tasker, Canada produced 730 megatonnes of carbon dioxide emissions in 2019, an increase of one megatonne — or 0.2 per cent — over 2018, which means Canada will have to do more in the years ahead to meaningful reduce emissions to meet the targets set at the Paris climate summit,

The Liberal government has committed Canada to being carbon neutral by 2050. But it has released no plan for the three to four per cent annual cuts that it would take to get there. Canada has never met any of its previous climate goals and is one of five G20 countries behind on its Paris commitments. 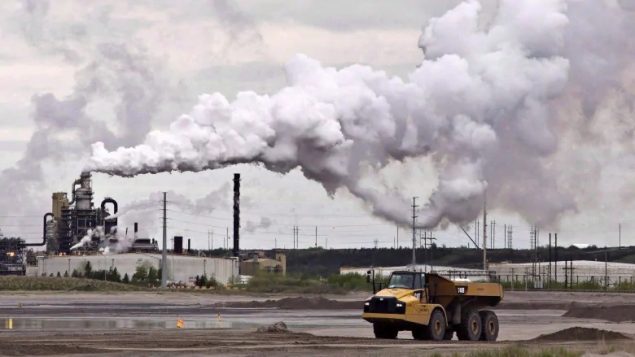 A dump truck works near the Syncrude oil sands extraction facility near Fort McMurray, Alta., in this file photo from June 2014.  (THE CANADIAN PRESS/Jason Franson)

In November 2018, the federal government termed SMRs “the next wave of innovation in nuclear energy technology” and in October of last year it announced it was investing $20 million into Terrestrial Energy to help the Oakville, Ont., company develop its design of a small modular reactor.

In December, the government launched what it called “Canada’s Small Modular Reactor (SMR) Action Plan” for what is said was “the development, demonstration and deployment of SMRs for multiple applications at home and abroad.”

The Canadian Nuclear Safety Commission, which is conducting pre-licensing reviews on several designs, has suggested it could be years, perhaps 2030, before SMRs would be operating in Canada.