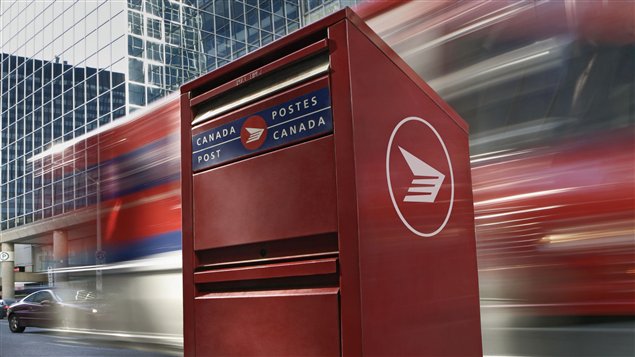 Canada's postal service Canada Post has announced millions of Canadians will no longer have mail delivered to their homes as part of a new cost-cutting plan.
Photo Credit: Canada Post

When Canada’s postal service Canada Post announced Wednesday (December 11) it would stop delivering mail to homes in urban areas it emphasized two-thirds of Canadians already don’t get door-to-door service, and the use of “community mailboxes” in urban areas would be phased in over the next five years to help defray costs at the crown corporation.

In its press release Wednesday, Canada Post announced “Over the next five years, the one third of Canadian households that receive their mail at their door will be converted to community mailbox delivery.”

A deeper analysis of Canada Post statistics found in its Annual Report of 2012 suggests this is not the only way to interpret how mail is delivered in Canada:

The next delivery method in the chart: “Centralized point (e.g., apt. lobby lockbox)” represents 25 per cent of mail deliveries in Canada. What’s interesting here, is that Canada Post does not consider delivering a person’s mail to the lobby of the apartment building they live in as “door-to-door” service.

If the two are added together, 58 per cent of Canadians effectively get door-to-door service.

Another 5 per cent of people living in rural areas receive mail in their mailbox at the end of their lane.

Another 12 per cent of businesses and people get their mail at post office boxes.

At the moment, those who get mail at “community mailboxes” represent only 25 per cent of the total. 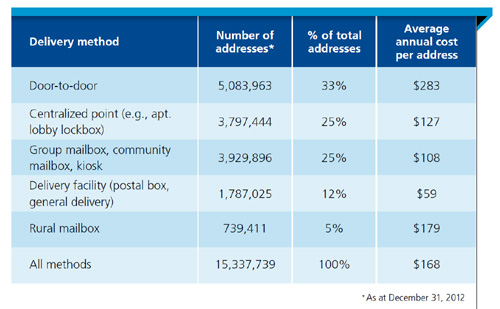 But an analysis of the crown corporation’s profits show that since 1995, the only year it did not make a profit was 2011, the year the corporation locked out its employees in a labour dispute.

The losses it “has begun to post” are only in the second and third quarters of this year.

Last year, for the first time in its history, Canada Post delivered a million parcels in a single day on two occasions – December 10 and December 17. This year, the million-parcel milestone has already been reached three times – on November 12, November 25 and on Cyber Monday, December 2. Today, Canada Post will again reach that parcel-delivery milestone as it delivers more than a million parcels across the country; additional million-parcel days are expected during the holiday season.

Response to modern life – 24 hour access
In its press release, Canada Post underlines that “Community mailboxes have advantages for busy Canadians as they offer individually locked mail and small packet compartments as well as locked compartments for securely receiving parcels” and can be accessed 24 hours a day.

It’s true that picking up packages or registered letters is limited to hours of a specific post office, but now, every day, millions of Canadians will have to go to their community mailbox to check to see if they have mail, rather than looking into their mailbox beside the door of their home.

Canada first G7 country to cut all urban home mail delivery
A Globe and Mail article comparing the mail services in the United States, United Kingdom, France, Germany, Italy, and Japan found Canada is the only one to decide to cut urban home delivery. And apart from Italy, all other countries deliver mail six days a week. It’s five days a week in Canada.