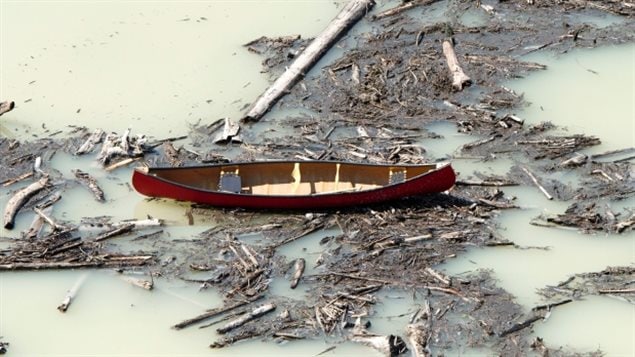 A canoe lies among the damage caused by a tailings pond breach near the Mount Polley mine.
Photo Credit: Canadian Press / Jonathan Hayward

The owner of the Mount Polley gold and copper mine in the British Columbia interior has signed an agreement with a First Nation to review a tailing facility at another mine it plans to open later this year.

The agreement between Imperial Metals and the Tahltan Central Council ends a blockade of the company’s Red Chris gold and copper mine in northwestern B.C.

A group of Tahltan elders had prevented workers from entering the site for the past two weeks.

Earlier this month, a dam failure at the Mount Polley mine, located about 600 kilometres northeast of Vancouver near the town of Likely, sent millions of litres of waste water into a network of salmon-bearing lakes and streams.

The agreement will see Imperial Metals pay for an outside engineering firm, chosen by the Tahltan, to review the Red Chris tailings facility.

The company also agreed to respond to any issues identified by the review.

Two weeks ago, the B.C. government appointed a three-member panel to investigate what happened at Mount Polley and issue a report by the end of Jan., 2015.

It also ordered other mine companies to conduct safety inspections of their tailings ponds by Dec. 1.