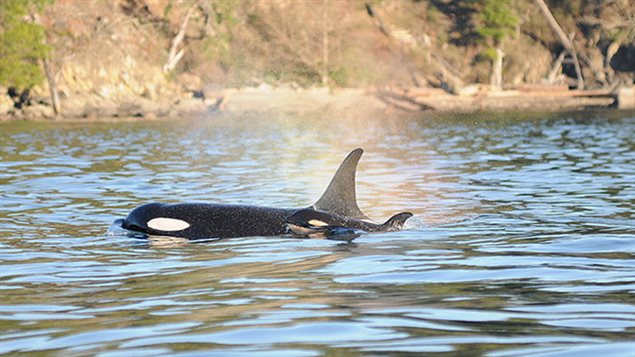 An orca calf, no more than a week old, has been spotted in British Columbia’s Gulf Islands swimming alongside its mother.

Known as J-50, because it is part of the endangered J pod of southern resident killer whales, its fate is uncertain, but the birth is good news for a population that lost four of its members in 2014.

It now stands at just 77 whales, the lowest it has been in a decade.

A young pregnant orca that washed up on Vancouver Island last month was found to have long been malnourished.  A necropsy also indicated that its fetus might have been dead for some time.

Canaries in the coal mine?

Orcas are picky eaters.  They mostly consume chinook salmon — the largest Pacific salmon —  and while some populations of the highly prized-fish are healthy, in some areas they have sharply declined and been listed as endangered by Canada and the United States.

Shortages may cause Pacific Northwest resident killer whales to starve and produce milk in quantities that are insufficient to feed their young.

Experts also believe the cetaceans, which are thought to be among the most contaminated marine mammals in the world, may metabolize their body fat to compensate for scarcer food resources.

As a result, pollutants in mothers’ systems could be killing their fetuses.