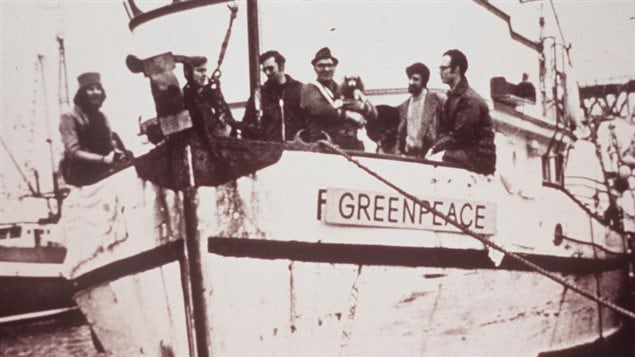 In 1971, a motley crew of anti-nuclear activists set out on a fishing trawler to protest US nuclear tests in Alasaka. The ship was christened Greenpeace for the voyage (you can just see the "P" of the original name -Phyliss Cormack" under the new sign. This is seen as the origin of the now huge international movement
Photo Credit: Robert Keziere / Greenpeace

The Greenpeace environmental movement is known worldwide now, with offices in over 40 countries, and almost 3 million supporters.

It is generally agreed that this date, September 15, 1971, marks the beginning of the international movement that began in Canada.

It was on this date that a ragtag group of 12 activists set out on a fishing trawler from Vancouver, British Columbia to protest US nuclear testing in Alaska.

It had humble beginnings however.

In the late 1960’s and early 70’s, the worlds ecoloby and environmentalism were unknown to the vast majority of the population.

The “peace movement” was fairly well established however, and the idea of protecting the environment was in it’s infancy.

It was the combination of these two concepts that led to the creation of Greenpeace.

In the late 60’s a few small groups had formed in Vancouver to promote peace and environmental action, one was the Scientific Pollution and Environmental Control Society (SPEC), another was the “Green Panthers” and another was created as an affiliate of the US-based Sierra Club.

From 1965 on, the US had been conducting underground nuclear tests on Amchitka Island in Alaska.

In 1969, they announced a huge test of a one-megaton bomb would take place.

Vancouver journalist Bob Hunter wrote that the blasts near a fault line could trigger an earthquake and a destructive tsunami. In the Vancouver Sun newspaper he wrote, “The United States will begin to play a game of Russian roulette with a nuclear pistol pressed against the head of the world.There is a distinct danger,that the tests might set in motion earthquakes and tidal waves which could sweep from one end of the Pacific to the other.

Soon a campaign began called “Don’t Make A Wave” in protest of the nuclear tests.

In October 1969, the one-megaton blast , 4,000 feet deep on Amchitka, registered a 6.9 shockwave. In November the US announced a five-megaton test would take place in 1971.

The origin of “Greenpeace”.

In February at a meeting in a church basement, a member of one of the groups proposed the Quaker idea of “bearing witness” and sailing into the blast zone to protest.  At the end of the meeting one member flashed the recent peace sign of  two fingers in a V shape and said “Peace”.  Bill Darnell then added, “let’s make it a green peace”.

The idea was printed in the Vancouver Sun as a Sierra Club idea, but the California group was against the idea, but the “Don’t Make a Wave” committee was for it.

Meanwhile another article appeared in the Vancouver Sun, dropping the Sierra Club reference and saying the ship would be called “Greenpeace” the first time the term appeared in print as a single word.

With funds from a benefit concert, the group chartered a fishing boat, the Phyliss Cormack, and renamed it “Greenpeace” for the voyage and the group of 12 people set off on this date.

A couple of years earlier someone had given Bob Hunter a book, which he took with him on the voyage. It was called- “Warriors of the Rainbow: Strange and Prophetic Dreams of the Indian People.”  One tale told of a prophecy where the people of the world would join together to save the world from destruction.

The ship never made it to the blast zone.  It was intercepted by a US Coast Guard ship, charged with a Customs infraction and sent back.

Interestingly, several crew members of the Coast Guard ship signed a letter of support. On the way back to Vancouver, the group proposed to change their name formally to the Greenpeace Foundation.

Although the peace activists never made it to Amchitka, the media attention resulted in an end to the nuclear attention.

Meanwhile, the Don’t make a Wave committee was debating whether to fold, but decided to continue with protests against French nuclear tests. This morphed into the World Greenpeace Foundation in 1972.

While Greenpeace had started as an anti-nuclear peace organization, it began to concentrate more on environmental issues when joined by two New Zealand scientists in 1975 who were strongly against whaling due to an incident they had witnessed years earlier in British Columbia. They had studied communications between whales trapped by fishermen and those which had managed to stay free.

That experience had turned the scientists completely against whaling, and thus began an additional new focus for Greenpeace.

Also by the mid 70’s people with similar pacifist and environmental goals had founded organizations using the name Greenpeace in Toronto, San Francisco, London, Paris, and Auckland. Paul Watson and David Garrick (Walrus) launched the first Greenpeace seal campaign in the spring of 1976.  Watson would later break off to found an even more action-oriented group called the Sea-Shepherd society.

Although the name Greenpeace only became official in early 1972, it is generally accepted that the origin of this vast movement began with the group in Vancouver who set out from the harbour on September 15, 1971