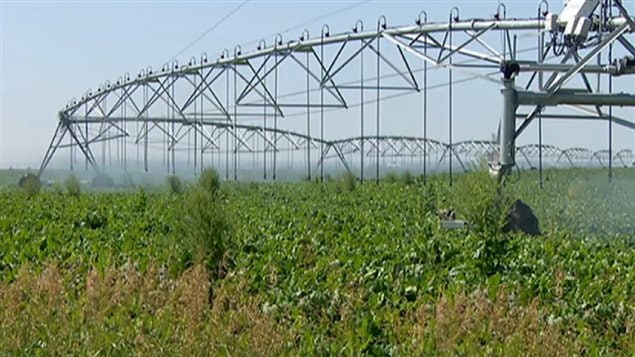 Climate change is resulting in more often and more severe droughts throughout the major agricultural regions of the American centre, west, and California. This in turn puts critical strain on water surface and acquifer resources which are being drained to meet irrigation requirements, and for city water supplies which are reaching crisis levels in recent years Some say it's only a matter of time before the US demands Canadian water and takes it one way or another
Photo Credit: CBC

Canada has water, the U.S wants it.

Once again this year, severe drought hit west coast  North America and the south-western US. This put enormous pressure on existing water supplies for agriculture and cities across a large section of the continent.  Also again this year, the situation reached crisis levels for south-western U.S. and  California, the biggest suppliers of fruit , nuts and vegetables to all of North America.

Many Americans once again looked to Canada and said there is plenty of fresh water being “wasted” by allowing it to flow freely into James Bay, the Arctic and Pacific Oceans. They say that the water could be sent to them,… some insisting not could, but should.

Although water is a critical resource and becoming ever more so because of climate change, it has not been discussed in Canada’s current election campaign.

Lloyd Alter has written several times on this subject. He is an adjunct professor teaching sustainable design at Ryerson University in Toronto, Ontario. He is also the design editor at Treehugger and a regular contributor of environment related articles to Treehugger, the Guardian newspaper, Corporate Knights magazine and others.

Professor Alter points out that there have been a number of schemes in the past to take fresh water from Canada and send it south to alleviate shortages in agriculture and in American cities.

In the 1950’s there were plans to use nuclear explosions to blast canals from Canada’s north, down to the US border. The plan was called the North American Power and Water Alliance, or NAWAPA. An incredibly ambitious concept, it would change the ecology of North America. Most Canadians would be absolutely horrified at the thought, but most have also never heard of it. Yet the idea has never gone away, and still lurks in the minds of many American politicians, and industrialists.

The idea was to redirect flows of major Canadian rivers southward through the Rocky Mountain trench, to the US west.  and also dam James Bay, blast a huge canal south through Ontario and send water into the Great Lakes, and then southward to the central US.

Some Canadian politicians past and present have thought this incredible plan was not such a bad idea.

But even if not this particular plan, the idea of somehow allowing bulk water sales, while abhorrent to most Canadians, is not necessarily so to recent politicians, such as former Prime Minister Brian Mulroney (1984-1993) who introduced a Bill (C-156) that would have allowed exports by tanker and small-scale land diversion

The most recent is the leader of the New Democratic Party, Thomas Mulcair. He thought the idea of bulk exports of water was worth exploring while he was the environment minister in the Quebec provincial government.  He is currently the leader of the federal New Democratic Party seeking to be Prime Minister of Canada in the present general election campaign, but now insists he has changed his mind.

While some Americans have said their next war will be with Canada to be fought over water, Alter says that’s hardly likely. Why fight after all when you can just buy it.  He says they will just keep raising their purchase offer until it’s too good for Canada to refuse.

“We want the money”

He points to the oil sands in Alberta saying that the oil sands cause great disruption of the land, enormous pollution, and so on, but Canada has decided the damage is worth it.

“It’s one of the biggest environmental problems we have in the country yet It was a conscious decision, we want the money”, he says.

He also notes that the international giant Nestle is already sucking up vast amounts of ground water for bottled water sales, and that Nestle and many other industries are allowed to extract water in bulk at little to no cost, and without serious conservation measures, at the same time as Canada is barring bulk exports.

The Americans might argue that this makes water a commodity and under international trade deals they should be allowed access as well. They could also possibly argue that the little or no cost to Canadian industry while barring Americans similar access, is an unfair advantage or a trade barrier again under terms of various international trade deals.

A paper published recently by the University of Calgary School of Public Policy  and produced by an American professor recently suggested Canada consider sale of water to the US.

The author Rhett Larson, an associate law professor and environmental law expert at Arizona State University  wrote, “Canada should arguably treat water the same way it treats oil or gold – a valuable commodity on the international market with benefits from exportation outweighing the costs of depletion”.

Indeed he noted that both Canadian and US industry already uses water from the Great Lakes which are shared with Canada of which over 2 billion gallons per day are never returned. The largest diversion of water is pumped from Lake Michigan, at up to 3,200 cubic feet/second and sent south through the Chicago River and into the Mississippi.

“What is the difference between the water embedded in Canada’s industrial and agricultural exports and raw water exported in bulk tankers or pipelines? Either way, enormous quantities of water are being exported from Canada.” Writes the American professor.

In any case, Lloyd Alter says with climate change causing increased hardship and increasing the need it is not a question of “if” Americans will come demanding Canadian water, but “when”.

Council of Canadians- concerns of exports 2014