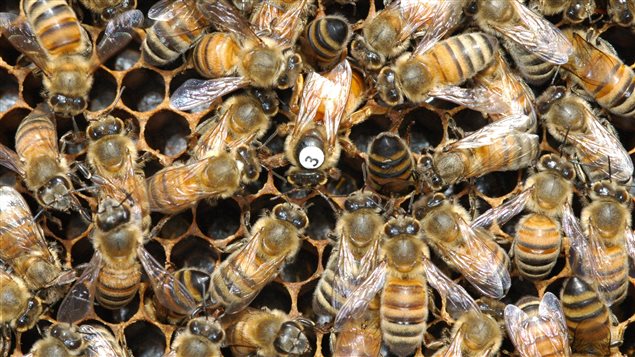 A mated and 'tagged' queen bee (3) lays an egg in an empty wax cell.
Photo Credit: A Zayed

Canadian beekeepers have been seeing substantial and above average die-offs of bees over the winter during the past several years. The beekeepers have been complaining that farmer’s increased use of neonicotinoid pesticides have been a strong factor in this loss by weakening the bees so they can’t survive the winter. While there may be other factors, like parasites and disease, the fact remains that in spring beekeepers often have to import queen bees from abroad, mostly from the US.

However, this presents other potential problems.

Honey bees produce about 34 million kilos of honey a year while also pollinating many crops representing a value to the economy of about $4.5 billion annually

The concern he says are, among others, that American bees are not well-adapted to the cold Canadian climate and could be contributing to the die offs.

He also notes that importing American bees has the potential to bring new bee diseases into Canada. Another concern is the spreading of Africanized genes, specifically the so-called “killer bee” genes of a particular species of African bee.

What the research team is doing is examining the genetic and proteomic (protein) markers in bees to selectively identify12 traits beekeepers want and allow for improved and faster selective breeding to promote those traits in the colonies.

Professor Zayed says this in not genetic manipulation, but rather simply a faster way of performing the age old practice of selective breeding. He says new technology developed in the quest to determine the human genome has meant a faster and lower-cost tool for examining the bee genome.

Once the genetic and protein template has been determined, beekeepers will be able to send in bees from their colonies for rapid assessment of the colony’s qualities.

As this will not reduce the total need for imported bees, the research will also be able to detect the presence of the specific “killer bee” genetics. He says there are many African bee species, but only one that causes the concern over “Africanized” or so-called “killer bee” aggressive behaviour.

Professor Zayed estimates the technology will be available to beekeepers in about four years time. It is also predicted to eventually provide benefits to beekeepers and agri-food industry in the many millions of dollars annually, and also to help beekeepers world wide.

The research, led by Genome BC and Ontario Genomics, will serve as a road map for improving honeybee health across the globe. The project is being funded through Genome Canada’s 2014 Large-Scale Applied Research Project Competition: Genomics and Feeding the Future. Other funding partners include Genome Alberta, Genome Quebec, the University of British Columbia, the BC Ministry of Agriculture and the BC Honey Producers Association.