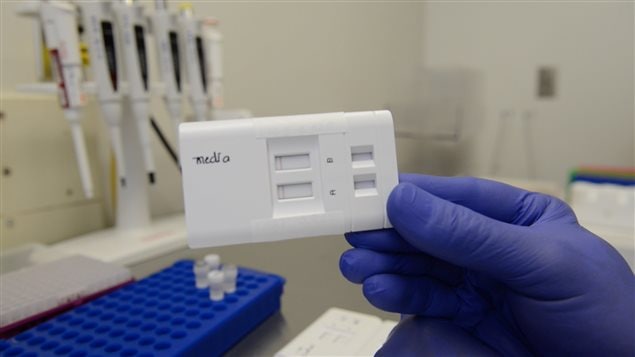 The new E. coli 0157 testing kit can dramatically cut the time to find out whether food has been contaminated with the bacteria.
Photo Credit: Schulich School of Medicine & Dentistry, Western University

Canadian researchers have developed a new, faster test for E. coli bacteria that could dramatically improve food safety. E. coli 0157 can contaminate food and cause diarrhea, kidney and other organ problems, and even death.

There are about 400 cases of such illness in Canada every year, most of them caused by contamination in ground meat. There are about 50 million cases in the United States.

‘A made-in-Canada solution to food safety’

It now takes three to four days to test food for these bacteria, which means food is shipped out before results come in. If tests show the food is contaminated, it must then be recalled.

The new test takes just over eight hours to complete and could be approved by the government department Health Canada before the end of this year. “What we hope is that this is a made-in-Canada solution to food safety,” says Dr. Michael Rieder, professor at Western University and scientist at the Robarts Research Institute in the province of Ontario.

“We’re hoping this will be able to cut the time in which we can identify pathogens in food so that we can go from having to recall 20-million-dollars’ worth of ground beef to having to recall maybe one day’s production.”

Scientists are also working to make the test even quicker and hope to eventually apply it to other food pathogens like listeria. The test was developed with support from public and private sources and is expected to cost about the same as current tests. Says Rieder “we’re hoping that this will actually be a big change in food safety.”