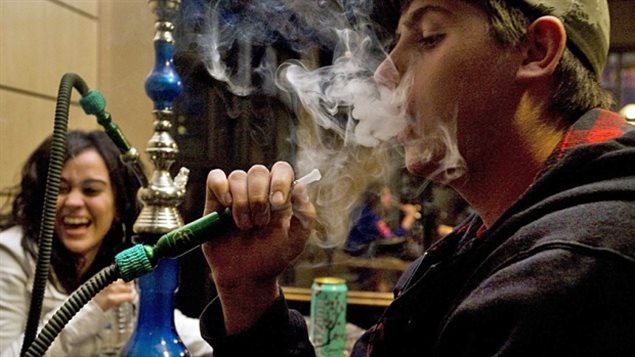 Hookahs or waterpipes are used to smoke tobacco and other herbal products. Also known as shisha, hookah smoking is especially popular among people from Middle Eastern and North African countries. A new survey shows its use increasing among Canadian youth.
Photo Credit: via CBC

A new survey of over 27,000 teen-aged high school students across Canada showed that even as cigarette smoking has declined, hookah, or water pipe smoking of herbal shisha has increased.

Leia Minaker (PhD) is a research assistant professor at the Propel Centre for Population Health Impact at the University of Waterloo, Ontario. She says her research shows a concerning trend that young people believe its not as dangerous as cigarette smoking.

Professor Minaker suggests that this is a trend of concern as shisha smoking has not been subject to regulation nearly as much as tobacco smoking which has been banned in indoor use, cafes, bars, restaurants and public places in all provinces and territories.

While many individual jurisdictions have regulated shisha and water-pipe use, there is still not the same country-wide restrictions.

Canada’s largest city, Toronto, has just voted to join a number of other jurisdictions in banning or restricting shisha smoking  and hookah water pipes in licensed establishments.  The Toronto ban, which will come into force in April 2016, affects between 60-80 businesses in the city that have on-premise use of hookahs.

While provincially there is no Ontario ban, Toronto joins

The provinces of Nova Scotia, New Brunswick, Prince Edward Island, Quebec and Alberta have banned public use of water pipes.  The west coast city of Vancouver  banned indoor water pipe smoking in commercial businesses in 2007, but that is being challenged in court by two lounge owners.

He said many people believe hookah smoking is less harmful than cigarettes because of the flavouring, and because there have been very few health warnings.

Professor Minaker says her study shows 40% of Canadian high schoolers also believe shisha smoking is not as harmful as tobacco, and that the names used to  describe flavours are also designed to attract youth.

Professor Minaker is the lead author of the research survey entitled, Hookah use prevalence, predictors, and perceptions among Canadian youth: findings from the 2012/2013 Youth Smoking Survey

In response to claims that it’s a cultural practice and bans are discriminatory, Leia Minaker notes that several mid-eastern countries have banned it as well. In Canada, she would like to see more stringent controls on shisha smoking and hookah use, especially as it seems to be becoming more and more popular among Canadian youth.