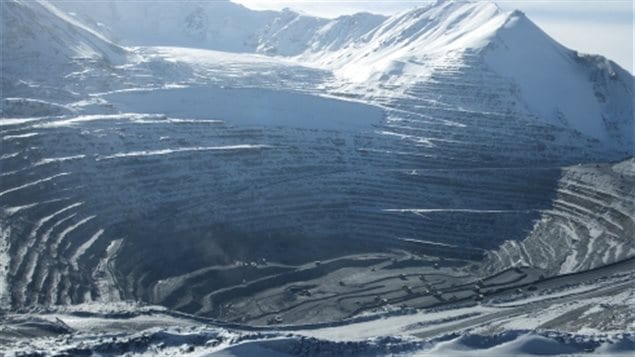 Kumtor mine site, with glacier at top. Kumtor has to remove thousands of tons of ice per day to keep it's operations from being overrun. Global warming has created a glacial lake higher up which threaten to breach and flood a huge toxic tailings pone
Photo Credit: Giulia Bernardi IRIN news

Even as climate talks take place in Paris, global warming has an effect on a particular situation that could involve toxic poisoning of the drinking water of a good part of an entire nation.

At a high altitude in the mountains of Kyrgystan a Canadian gold mining operation has dug through a glacier to get at gold deposits underneath.

The Kumtor Mine, operated by a subsidiary of Canada’s Centerra Gold, has created a enormous toxic tailings pond which is growing as the operation continues.  With global warming however, a large glacial lake has been developing above the mine, held back by a moraine of rocks dirt and melting permafrost.

William Colgan (PhD) a geologist with a specialty in climatology,  has been studying glaciers and their response to global warming.

He is currently an assistant professor in the Lassonde School of Engineering at York University, Toronto

As an example of how serious warming is in terms of glaciers and melting, Professor Colgan, who has studied the Greenland ice sheet extensively, notes that it currently is losing on average several thousand tonnes of ice per second (melting and calving), or anywhere from 150 to as high as 250 gigatons per year.

In the case of the Kumtor mining operation, he says the company has to remove thousands of tons of ice per day, to keep the site from being overrun by the advancing glacier.

The concern is that with warming, the glaciers high in the mountains are melting quickly, not only causing continuing concern at the site, but also creating a natural lake that has formed above the mine. Because of glacial melt that lake is growing rapidly.

The water is putting increasing pressure on the moraine, a situation exacerbated by the fact that permafrost within the moraine is also melting, thereby weakening its structure and strength.

Though the company says it is pumping water out of the upper lake to reduce pressure on the moraine barrier, many say that is not enough.

Professor Colgan speculates that as the lake continues to fill as global warming melts the glaciers more quickly, it’s not a question of “If” but rather “when” the lake will burst through and quickly overflow the tailings pond sending vast amounts of water laced with arsenic and other toxins into the nearby river used by residents for irrigation and drinking.

The surface area of the tailngs pond is approximately two square kilometres, but in the company’s assessment the current structure and capacity is not big enough to hold planned tailings and the barriers will have to be increased,

“The remaining approved capacity of the tailings management facility is insufficient to store all of the 45 million cubic metres of tailings (68.6 million tonnes of ore) to be processed in the current LOM plan. To accommodate the shortfall, storage options are being considered,  including raising of the existing tailings dam and or constructing new tailings management facilities both within and outside the Concession Area”.

The report also notes the danger of a breach of the Petrov Lake above the operation, saying the current risk is low, but is a “serious threat” and that climate change is the reason.

A law had been proposed in Canada, Bill-C-300, to hold Canadian companies responsible for environmental and human rights abuses, but this was defeated in 2012.

Centerra Gold report on Kumtor Mine