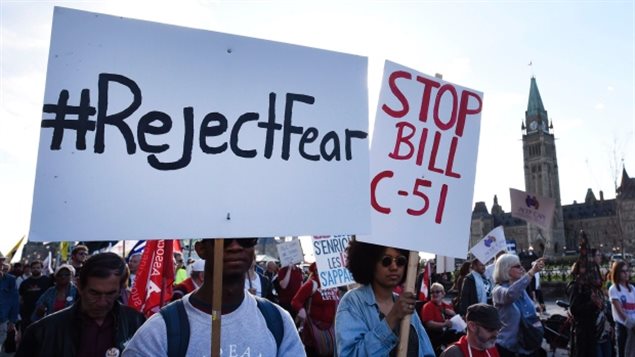 Rallies, like this one in front of the national Parliament in Ottawa, were held across Canada in the spring of 2015 to protest the (now former) Conservative government’s anti-terrorism law. Justin Trudeau’s Liberals promised to change it if they formed the government which happened in October 2015.
Photo Credit: Justin Tang/Canadian Pres

It’s known more commonly as “the anti-terrorism act” and was passed into law last year by the former Conservative government.

Bill C-51’s official, long and complicated name is, “An Act to enact the Security of Canada Information Sharing Act and the Secure Air Travel Act, to amend the Criminal Code, the Canadian Security Intelligence Service Act and the Immigration and Refugee Protection Act and to make related and consequential amendments to other Acts”.

The group, Canadian Journalists for Free Expression (CJFE)  has launched a publicity campaign called  “#my privacy campaign” and along with the Canadian Civil Liberties Association (CCLA) has also launched a legal challenge  saying the law contravenes aspects of Canada’s Charter of Rights and Freedoms.

The public awareness campaign is to push the current Liberal government to follow up on their election promise to repeal what they deem the “problematic elements” of the bill, and  the government’s recently announced intention to hold a broad consultation process.

In one, a man used his car to run down two soldiers, killing one. He was chased by police and when his car crashed, police shot him as he approached carrying a knife. In the other, a lone gunman shot a soldier on honourary guard duty at the Tomb of the Unknown Soldier before running across the street to the Parliament buildings where a shootout occurred and that gunman killed.

The former Conservative government then proposed the omnibus bill as a way to increase Canadian security.

Many were highly critical of the increased surveillance and information gathering abilities it granted to police and security agencies.  The various organizations protesting the law, passed in the fall of 2015, was that it was vague, gave too much power to police and violated individual’s rights to privacy,

They say for example that innocent comments could be easily misconstrued and declared “terrorist” because of wording in the bill, private information would not be private and could be shared among government agencies, that protesting against the government could result in police surveillance, and other concerns.

“No legislation has had more of an impact on free expression and civil liberties in recent history than C-51,” says Tom Henheffer, CJFE’s Executive Director in a press release. “It is dangerously overbroad, unjustifiably encroaches on the rights of Canadians, and needs to be scrapped or dramatically amended. To do so properly and transparently, our new government must engage in robust dialogue with Canadians, experts and civil society organizations.”