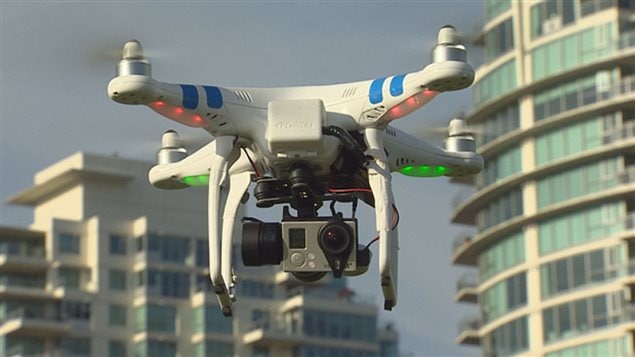 Drones are increasingly becoming a useful tool for all kinds of businesses, from realtors who want aerial shots of property, to film companies,, farmers, surveyors, and so on. Because of risks, insurance companies have begun offering insuarnce. There was concern in 2014 when a UAV filming a commercial in Vancouver crashed into a building. No one was hurt and no charges were laid, but a temporary moratorium was put in place while the city studied UAV use.
Photo Credit: CBC News

The increasing use of drones for business purposes has opened up a whole new area of concern for owners, and for insurance companies.

Normal business insurance coverage would not include liability for the relatively new field of drone use.  To deal with the potential for damage and liability, several companies in Canada now offer additional drone insurance for businesses

Amanda Dean, is the Atlantic vice president of the Insurance Bureau of Canada.  Quoted by CBC she said, “Liability arising from drones and drone usage for commercial purposes would generally not be covered in a typical commercial policy…business insurance coverage, as they would fall within the aviation exclusion of a general liability policy.”

Drone policies being offered vary in coverage and liability, but generally cover damage a drone accident might cause, or damage to the drone itself.

Drone costs for commercial capable drones can range from $1,000 dollars up to the tens of thousands of dollars depending on their sophistication and the jobs they’re required to perform.

Because these are air vehicles in commercial use, they fall under Transport Canada regulations and companies using them are required to carry a minimum of $100,000 in liability insurance.

At least one drones company which is hired by film companies and realtors says that those using drones commercially may think twice about whether the cost of operating their own drones is really worth it, adding that an operation would have to be using drones regularly to get their money’s worth out of it.