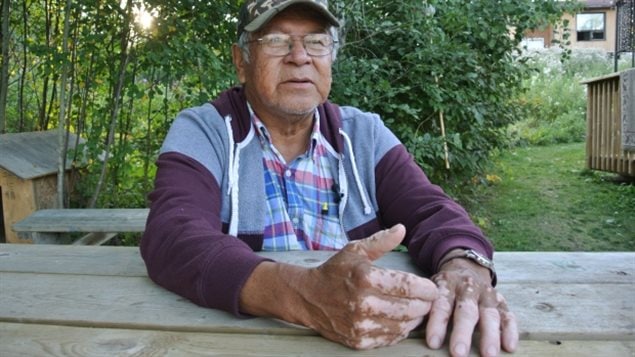 Grassy Narrows mercury contamination can be cleaned up: scientists

Grassy Narrows is in the spotlight again following the release today of the latest study to find the decades-old mercury contamination in the waterways can be cleaned up, and should be cleaned up.

The mercury levels were first studied in the 1980s by a government research team. John Rudd was part of that team and now he is the lead author of this most recent research, commissioned by Grassy Narrows First Nation.

“It has been frustrating,” Rudd said. “We made these recommendations in the 1980s and our report was put on the shelf.”

The Ojibwa First Nation community, 80 kilometres north of Kenora, in northwestern Ontario was severely affected when a nearby pulp mill dumped its effluent into the watershed. Mercury flowed into the English-Wabigoon water system between 1962 and 1970.

Craig Benjamin, a campaigner with Amnesty International Canada, says “it was a preventable tragedy”. He says governments were becoming aware of the dangers of mercury poisoning following the disaster in Japan, that named the condition ‘Minimata Disease’ after the city in the southern Japan where a chemical factory had been dumping mercury into the waterway.

In the late 1950’s and early 60’s it became evident the disease, which manifested as epileptic-like behavior with violent seizures, a loss of balance and slurred speech, was understood to be the result of mercury poisoning the people.

In 1957 researchers concluded the toxic disorder of the central nervous system was caused by certain organic mercury compounds transmitted through seafood. Babies were being born with brain damage and extreme physical disabilities and more than 100 people died of the condition.

In the Grassy Narrows region, native people first noticed the disappearance of the otter and the mink. Then they noticed the strange way the eagles and vultures were flying overhead. By the 1970’s it was understood something was wrong.

Eventually the commercial fishery was closed which ended the guiding native people had been employed in, and the fish they depended on as a source of food was toxic. Benjamin says that even today people are still suffering the adverse effects of mercury poisoning.

Japanese researchers have been to Grassy Narrows five times since 1975, to study the effects on the people. According to CBC reporter Kelly Crowe, Dr. Masazumi Harada, a Japanese scientist who specialized in mercury contamination in Japan. She said he “diagnosed at least 60 cases of Minamata disease in Grassy Narrows, another 54 cases of Minamata-with-complications and a further two dozen suspected cases.” Canadian authorities have never acknowledged any.

In some lakes mercury levels continue to rise according to another study commissioned by the provincial government and the Grassy Narrows First Nation.

Patricia Sellars, a fresh water scientist, released her study a year ago, and in an interview with CBC radio in mid-June, explained that what’s described as “legacy mercury” can be re-mobilized and carried downstream.

In the study released today, the researchers suggested there may be ground water mercury still leaching into the river from the original pulp mill source, which would account for the remaining high levels of mercury, despite all the years of so-called “natural recovery”.

Ontario’s Ministry of Environment and Climate Change has reviewed John Rudd’s report and disagrees with its conclusions.

“Currently there is no evidence to suggest that mercury levels in the river system are such that any remediation, beyond continuing natural recovery is warranted or advisable,” Gary Wheeler responded in an email to CBC News.

A search on the ministry’s website using the name Grassy Narrows, reveals no links to any mercury problems. Tomorrow a delegation from the community is travelling to Toronto, to raise awareness of the contamination issues.

The report on the high levels of mercury in Grassy Narrows waterways was released on the same day the province’s premier, Kathleen Wynne, issued “a formal apology for the abuses of the past”.

In late February this year, Judy Da Silva represented Grassy Narrows before the UN Committee on Economic, Social and Cultural Rights pressing the community’s case against Canada for its failure to address the mercury levels, and their right to safe drinking water.