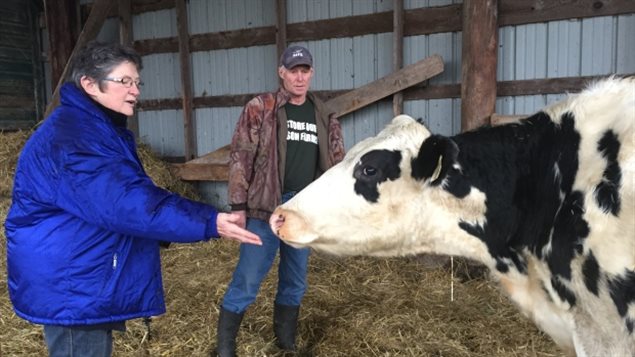 A group called the Pen Farm Herd Co-Op has been planning to re-establish the herd at the prison farm in Kingston, Ont., closed by the Conservative government.
Photo Credit: Maureen Brosnahan/CBC

The idea was to give prisoner’s useful work, reduce food costs for the prison system itself, and possible give them training for a career upon release.

Canada has had prison farms since the 1880’s. Up until 2010, Canada had six of them: two in Ontario, and one each in British Columbia, Alberta, Saskatchewan, and New Brunswick.

That year though the Conservative government shut down the programme saying that farming was not a useful rehabilitation method in today’s high-tech society.

The government then closed and sold the prison farmland in the east and west and closed the two farms in Ontario located near the city of Kingston. The decision was highly controversial at the time and groups have been agitating for their restoration since then.

Jeff Peters, a member of the Kingston area group Save Our Prison Farms said, “Closing the prison farms didn’t make sense. The farms provided meaningful work experience and training, as well as rehabilitation and therapy. Prison staff told us that inmates who participated in the prison farm program were less likely than inmates overall to re-offend when they were released, so the program made our communities safer.”

Now the Liberal government has launched a feasibility study on restoring the two Ontario farms near the city of Kingston.

Responding to a question in the House of Commons, Minister of Public Safety Ralph Goodale said the government was launching a feasability study and online survey on restoring the two Kingston farms.   “This process will allow citizens, business leaders and other stakeholders to share their visions for what the program could look like, and it will allow the government to review the cost and efficacy of reinstatement,” said Goodale

Catherine Latimer, the executive director of the John Howard Society of Canada, a prisoner aid and counselling society, was pleased with the news.

“We think the restoration of the prison farms would be a wonderful idea … I think there are a variety of skills that are derived from the prison experience,” Latimer said, adding, “Learning how to be responsible, how to develop a work ethic, working collaboratively with others.”

The Kingston farms had some 1500  acres of top quality farmland located in and near the city, and locals are concerned that farmland is at risk of development if the prison farms are not restored.

In 2010 one ad-hoc group calling itself Pen Farm Herd Co-op, quickly raised enough money to buy 23 of the penitentiary’s cattle and have been “fostering” the cattle at local farms in the hope that they could eventually sell them back to Corrections Canada to restart operations if and when the farms are restored.

The prison farms near Kingston previously had a large dairy herd of about 300 cattle, and several thousand chickens which provided milk and eggs for some 15 prisons in the province as well as local food banks. Friut and vegetable production and at the Joyceville/ Pittsburgh institution there was also an abattoir that processed animals for about 300 small local farms.

Catherine Latimer hopes the farms are not only restored, but updated and points to prison farms in Britain where co-op programmes have created fully functioning restaurants. Quoted in the CBC she said,” There is a real opportunity for there to be more skills that are marketable coming from the prison experience”.