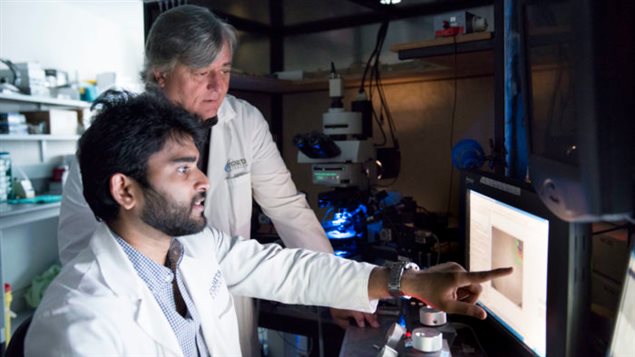 Supervising researcher Michael Poulter PhD, and lead author PhD candidate Chakravarthi Narla have discovered that a neurotrasmitting hormone reacts differently in an epileptic brain, than in a non-epileptic brain. The discover has major implications in treatment of epilepsy and other diseases.
Photo Credit: Western University

Canadian research: Another step forward towards the understanding of epilepsy

Like most neurological conditions, it’s an extremely challenging condition to understand and thus develop treatments.

Canadian researchers at Western University in London, Ontario, have made another exciting advance along that long road.

Michael O. Poulter (PhD) is a scientist at the Robarts Research Institute and a professor in the Department of Physiology and Pharmacology at the Schulich School of Medicine and Dentistry.

The study by Poulter’s team, including lead author and PhD candidate Chakravarthi Narla, was published in the scientific journal, Science Magazine (abstract here)

They were studying the effect of stress on epileptic brains. Evidence suggests that stress, either good stress or bad, causes more frequent and more severe epileptic attacks.

During stress a neurotransmitting hormone called ‘corticotropin-releasing factor’ (CRF) is present in brains, but research by the team from Western surprisingly discovered that CRF has a completely different reaction in the epileptic brain than in a non-epileptic brain.

Whereas in a ‘normal’ brain it has a calming effect on a particular part of the brain that easily supports seizures, the research found that in an epileptic brain, CRF had an opposite effect and instead excites the ‘piriform cortex’ area.

Professor Poulter says “What we found is that there is a switch in the molecular signaling in the brain. In the model of epilepsy, the CRF switches from signaling through one cascade to one that’s completely different and we discovered that the catalyst for that is a protein in the brain called the regulator of G protein signaling protein type 2 (RGS2).”

The researchers are excited about the discovery which they says should lead to new paths of further research.

The implications are twofold: first in terms of treatment of epilepsy, that a CRF inhibitor might be used to prevent stress-induced seizures in epileptic patients, and the other wider implication is that this discovery seems to indicate that brain diseases may induce as yet undiscovered changes in other neurochemical processes that make disorders like depression or schizophrenia worse than they might otherwise be.