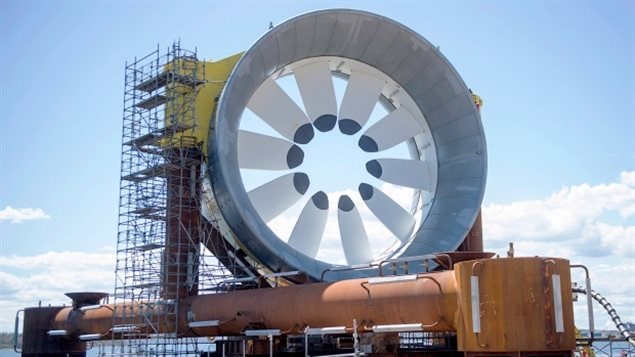 Cape Force Tidal wants to place two, five-story high turbines in the Minas Passage to harness the energy of the massive Bay of Fundy tides. The company is a joint partnership between Halifax-based energy services company Emera Inc. and OpenHydro, a subsidiary of DCNS, a French conglomerate that specializes in naval defence and energy. Cape Force is one of five technologies seeking to be tested in the area.
Photo Credit: Andrew Vaughan/The Canadian Press

For decades people have thought of how to harness the potential renewable power of the Bay of Fundy tides in Canada’s east coast. These are the highest tides in the world, and as such extremely powerful as they advance and recede.

A test turbine was severely damaged in 2009 by the force of the current.  Now two enormous turbines of 1,000 tonnes each are set to be lowered in the Minas Passage, a five kilometre area at the top of the Bay of Fundy where the massive tides are funneled through a narrow passage and so the speed and force of the tides are increased.

But the projects have met with considerable resistance from fishermen in the area who are deeply concerned about the underwater turbines possible effect on marine life.

The 175-member Bay of Fundy Inshore Fishermen’s Association is seeking a court order to put a stay on the Nova Scotia environment minister’s approval for the project which had been given in June.

The government said it was doubtful the slow moving blades would harm fish or other marine creates sweeping past with the tide at about up to 10 knots. (18km/h)

Although the fishermen’s group has a Nova Scotia Supreme Court hearing in February, the group said it needed a stay of the project as the company behind the project, Cape Sharp Tidal, would not agree

to postpone placement of the the turbines until after the court hearing.

The fishermen will submit its request for a stay on October 20 saying the minister failed to properly consider evidence suggesting the project needs more study. Qouted by the CBC in August, fishermen’s spokeman Colin Sproul said the information the minister had was “”grossly inadequate and not based in fact”, adding, “We have a concern that any impacts of the turbines will be vastly underestimated due to that fact,

Recently Sproul said the fishermen are not opposed to renewable energy projects, but rather want to wait for a report from a year-long study which can establish a baseline for the state of marine ecosystem in the area.

He said, “If that turbine goes in the water in the Bay of Fundy (this fall) …. it will never be removed. That’s why it’s so critical for our case for the stay application to pass”.  The group believes the turbines will harm the ecology of Minas Basin, and that the company is planning to place them in the passage in November.

A spokesman for the Fundy Ocean Research Centre for Energy, which is the test centre overseeing the several tidal energy project says the turbines must go in the water to answer a number of technological questions.

Matt Lumley said they are monitoring potential effects on fish, marine mammals, birds and changes in underwater noise levels, but adds any effects during the test phase are likely to be minimal.  He added the centre has been conducting research since 2009, has spent $15 million on 110 studies, and has placed three underwater sensor monitoring stations as part of the research.