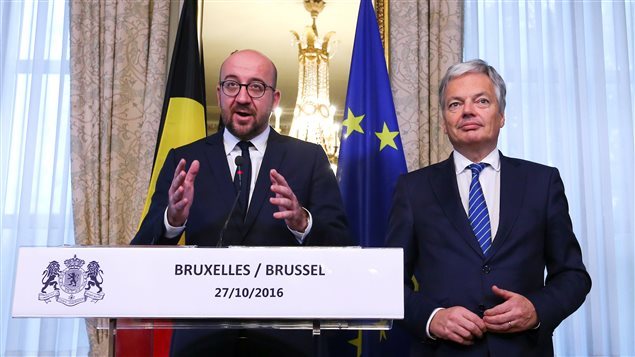 CETA trade- on again, off again, now back on?

Headlines have been saying the huge CETA trade deal between the European Union and Canada is now back on after late night negotiations in Belgium with the dissenting region of Wallonia.

This removes a roadblock, but, the deal is not signed yet.

We hear more on the situation, with background and analysis from Canadian professor emeritus at the Schulich School of Business of York University in Toronto, Bernard Wolf. He is also the Director of the Certificate in Managing International Trade and Investment.  He says this is a good deal, but that opposition to such trade deals arises because while many benefit, some are harmed and the benefits do not get evenly distributed.

We also get analysis, and prospects for eventual signing, from Armand De Mestral, professor emeritus at Montreal’s McGill University in the Faculty of Law.

Professor De Mestral is a specialist in European law, and international trade law

He also thinks the deal is likely to go ahead, but notes that it still has to go through several steps. As with Professor Wolf, De Mestral says this is a good deal for both Europe and Canada.  He also agrees that while such trade deals have provided great benefits, opposition grows from those who are harmed, and again, because the benefits are not distributed throughout societies.

He notes there is much new language in this deal to improve upon past free trade agreements, but without knowing details, there may be potential blockages to come.

One of the major issues for those against CETA is the investor state dispute settlement (ISDS) clause.  Many have said these types of clause in trade deals gives corporations power to financially penalize or subvert sovereign decisions which are deemed to have harmed their profit potential.

The Council of Canadians is a citizen’s advocacy group opposed to the deal. Although details are not known at present, National Chair Maude Barlow said today, “It is a mishmash of strange compromises …CETA in fact could be as dead as it was yesterday. It also sends the ICS – the provision that allows foreign investors to sue governments – to the European Court of Justice for a ruling on whether it is compatible with EU treaties. Any decision on regulatory cooperation can still be blocked by Belgium’s regions and they can restrict Canadian market access on agricultural products. This has a long, long way to go before it is real, and no amount of ceremony with a formal looking signing by our Prime Minister in Brussels can change this fact.”

Because of the unknown details that have been worked out with Wallonia in Belgium, the time factor for approval by governments is not known. It is expected that politicians in Canada, but especially in Europe will be pushing hard to get the deal approved quickly.This may not be possible and the strong opposition to the deal is not likely to stop.