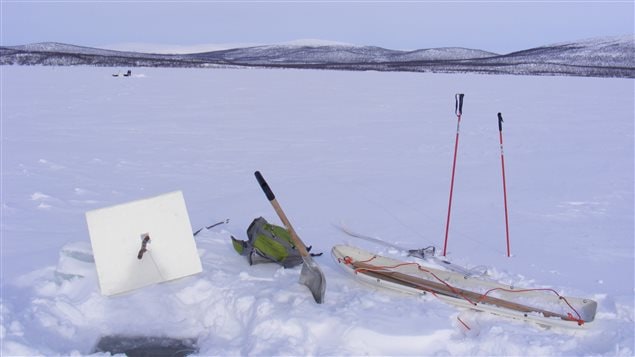 The lake in winter: not asleep at all.

Winter in the northern hemisphere is a time when many creatures slow down, or even hibernate.

In freshwater lakes and rivers, frozen over with ice and covered with snow, it gets darker and cold. Scientists have long thought that very little activity takes place in the plants, fish and other tiny creatures during the winter months. Freshwater lakes in winter have been little studied, until now. A comprehensive first study has just been published.

Brian Hayden (PhD) is a co-author of the new research paper. He is a Research Fellow with the Canadian Rivers Institute and Biology Department at the University of New Brunswick.

The international study involved 62 researchers from Canada, the US, the UK, Finland, Spain, Germany, Estonia, Sweden and Russia. Their studies in those countries of some 100 lakes showed there’s actually lots going on.

“We were quite surprised to see comparatively vibrant life under the ice in most lakes. This suggests that what was previously assumed to be a relatively dormant period is anything but”. Brian Hayden

The research was published in the science journal Ecology Letters under the title, “Ecology Under Lake Ice”. (full report here)

American Stephanie Hampton was lead author. She says, “As ice seasons are getting shorter around the world, we are losing ice without a deep understanding of what we are losing.”

The study is the first comprehensive look at freshwater lake ecosystems in winter. It will help scientists to understand more about what happens in the winter months affect lake life in the warmer months and in a way act as a baseline for future studies as the climate changes and affects lake life.