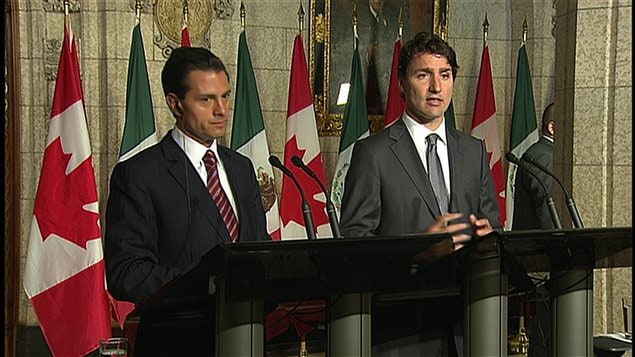 When Prime Minister Justin Trudeau and Mexican President Enrique Pena Nieto announced the lifting of stringent visa requirements for Mexican travellers coming to Canada at a bilateral meeting in Ottawa in June, it was unclear what the effects would be.

The policy change took effect Dec. 1, and new figures released by the Canada Border Services Agency show that at least 70 Mexicans have claimed refugee status in Canada since then.

The increase is in sharp contrast with the policy of Canada’s previous Conservative government, which imposed tighter visa requirements in 2009 in what it said was an attempt slow the flow of asylum claims from Mexico.

Those claims nearly tripled from 2005 to 2008 when Mexicans accounted for more than 25 per cent of all refugee claims filed in Canada.

After the visa requirement was imposed, the number of claims dropped dramatically from 9,511 in 2009 to 1,349 in 2010 and has continued to drop since.

In joining Trudeau for the announcement in June, Nieto said Mexico was reopening its market to Canadian beef.

The new figures have drawn a mixed reaction.

Janet Dench, executive director of the Canadian Council of Refugees, says the increase is a positive development.

“It means that people whose lives may be at risk are able to find protection in Canada,” Dench told the CBC. “We look at it in terms of the number of lives saved; people who are able to escape possible torture or serious harm.”

Dench adds that comments by U.S. President-Elect Donald Trump about Mexicans have put “fear into the hearts” of some Mexicans who could seek refuge in Canada.

But the increase is not sitting well with the members of the former Conservative government.

“We anticipated there would be if not an immediate spike, a surge, and it seems that is what’s happening,” says Conservative Foreign Affairs critic Peter Kent.

He says the shift in the rules is the result of a what he calls “a flawed policy decision based on politics rather then evidence.”

Immigration, Refugees and Citizenship Minister John McCallum says he is monitoring the number of Mexican refugee claims and could reinstate the visa if it climbs too high.

The number of Mexicans coming to Canada pales when compared to the number of people fleeing the Syrian civil war that Canada has accepted.

That figure stands at nearly 40,000 refugees over the past year.