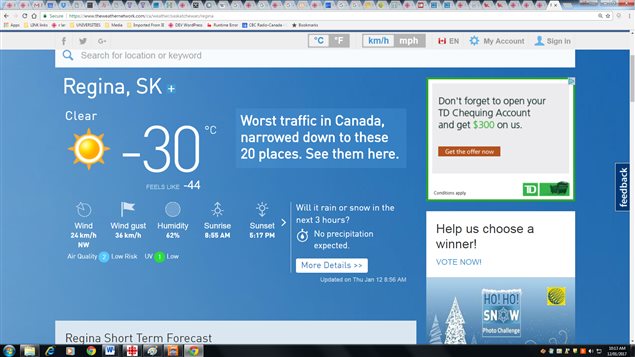 How crazy can the weather be in Canada?

It’s winter here, and that used to mean across almost all of Canada, a steady few months of cold and snow, except perhaps for the lower portions along the coast of British Columbia. There, generally speaking, in Vancouver for example, winter would be chilly but with much more rain than snow

In late December and so far in January, Vancouver and the southern coastal area has seen storm after storm leaving streets plugged with snow and dangerously icy sidewalks, something the port city is not really used to, or well-prepared for.

The current temperature this morning in the capital of Saskatchewan, Regina, is -30, but with the wind chill with winds of 36km/h, it is the equivalent of -44..

In Winnipeg Manitoba, not quite as cold, around -20, but with a blizzard warning, near zero visibility in many areas, highway closures and wind gusts up to 80km/h.

Meanwhile, across southern Ontario, Quebec and eastward,  which experienced a blizzard with very strong wind gusts only a few days ago. the temperature is well above zero. with the warm temperatures of up to 7C today in Montreal and after a night of rain, much of the snow cover is gone, and there’s lots of slush. Then on Saturday in Montreal the high will only be -12, but by midweek back above zero again.

So with weather currently ranging from cloudy and damp in Nova Scotia and around 10C on the east coast, similar in the central provinces  to blizzards, white outs and -30 temperatures in Saskatchewan,  and generally sunny and around zero on the west coast, you get a range of over 50C in temperature variation  across the southern portion in this big country all on the same day.