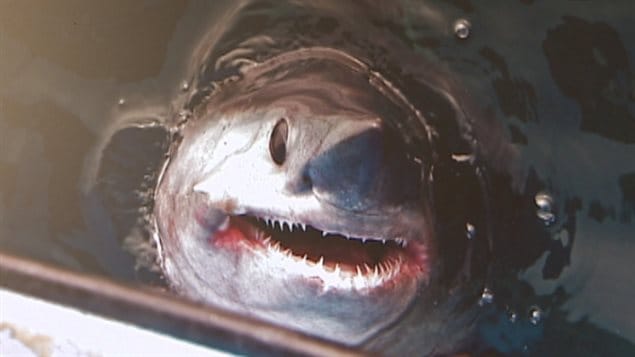 The fierce-looking shark is sometimes confused with its larger relative, the great white shark, due to its similar body profile. The probeagle which spends much of its time in Canadian waters in endangered. Fisheries Dept estimates numbers are about a quarter of what they were in the 1960’s
Photo Credit: (Steven Campana/BIO

Marine protected areas for sharks and rays: are they working?

The idea of specific areas of ocean set aside as “protected” zone, officially Marine Protected Areas (MPA) was to protect marine biodiversity in a safe area.

A new study shows that’s not really working and especially so for sharks and rays which have the highest proportion of threatened species of any marine class.

Nick Dulvy, (PhD) is a professor in the Department of Biological Sciences at Simon Fraser University in British Columbia, and  Co-Chair of the International Union for the Conservation of Nature’s Shark Specialist group

The study by lead author Lindsay Davidson and co-author Professor Dulvy, was published in the science journal Nature Ecology & Evolution under the title,”Global marine protected areas to prevent extinctions”

What they found is that  of the approximately 1,200 shark and ray species, about a quarter are now at an elevated risk of extinction.

The study says the situation is worsening in spite of a multi-nation effort to create protected marine zones.

Sharks are a keystone species in the marine environment, but professor Dulvy says rays are also a very important predator in shallow and warmer waters.

He is also critical of the placement of these MPA’s. He says often it’s just a convenient area designated because there’s generally little interest by commercial ventures, such as oil and gas, or fishing.

He also says too often there is no monitoring so that fishing can go on within the zone undisturbed.

The study also notes that about a third, or 15, of the present protected areas were set aside to protect sharks, but only 12 of the 99 most threatened sharks and rays are found in those areas.

He says rather than just set aside a swath of ocean, biologists and politicians should look carefully at what species they want to save, and find out where they are, and set aside those areas.

Majority funding for the research comes from NSERC, the Natural Sciences and Engineering Research Council of Canada