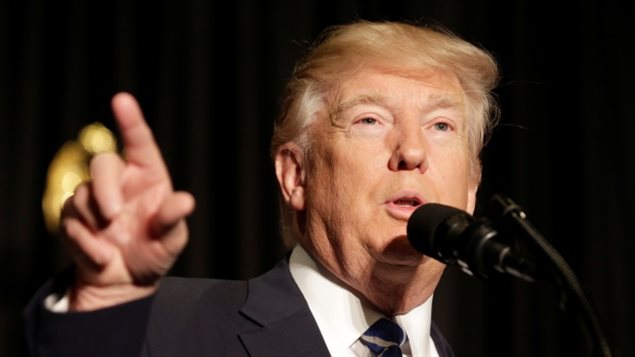 In a public speech, U.S. President Donald Trump said the courts were ‘so political’ in making their decisions on his travel ban.
Photo Credit: Joshua Roberts/Reuters

The rule of law must be defended by everyone, say legal scholars

President Donald Trump’s nominee for the U.S. Supreme Court was quoted as saying he found Trump’s attacks on the judiciary “demoralizing” and “disheartening” and he is not the only one. Western democracy is based on the rule of law but it appears to be under siege in many countries and, shockingly, in the United States.

In the U.S., the judiciary is one element of the constitutional system of checks and balances designed to make sure no one branch of government has too much power. Yet Trump bridles under its restriction.

Trump’s executive order banning travel from seven predominantly Muslim countries was challenged in the courts. He lost and the ban was suspended. This prompted the president to deride the presiding judge as a “so-called judge” whose “ridiculous” ruling would be struck down.

After he lost his appeal to have his ban reinstated he tweeted , “A disgraceful decision!” Canadian leaders too have sometimes been frustrated with decisions by the courts which have been seen to be political. But there is a long-standing tradition of respecting judges in both Canada and the U.S. While former Canadian Prime Minister Stephen Harper did on occasion criticize judgements, his words pale in comparison with Trump’s vitriol.

“I think what is happening in the United States now is really crossing the line into either fundamentally misunderstanding what the role of courts is or interfering with their role which is precisely to uphold the rules as they exist and to review the exercise of power by governments and arguably including the president of the United States,” says Jutta Brunnée a professor of law at the University of Toronto.

“It undermines the role of the judiciary but it also, I think, challenges the idea of a division of powers between the executive and legislature and the judiciary.

Brunnée says it is fine to have policies that differ from the norms of the past, but they should be applied within the existing law both within the U.S. and in its dealings with the rest of the world.

Will international law be respected?

Foreign governments were shocked to see the executive order on travel and its apparent disregard for international law on the protection of refugees from war. They may well wonder whether the Trump administration will abide by agreements the U.S. government has already made such as the Trans-Pacific Partnership, the North American free-trade agreement, the Paris climate agreement, NATO and the United Nations. If Trump withdraws from some as he has threatened to do, they wonder whether he will do so according to legal provisions within those agreements or simply ignore them.

They are also concerned about his apparent open mind on the use of torture and military action to combat Islamic State with apparent disregard for international law regarding the use of force.

Rule of law protects everyone

“One of the purposes of the rule of law is to provide a foundation on the basis of which people of different views with different priorities can interact and also stronger and weaker people can interact,” says Brunnée. “It may be that today one agrees with what any given government wants to do regardless of the rule of law, but what if tomorrow the tables are turned and it goes against something you are interested in yourself?

“The point of the rule of law is to provide protection for everyone ideally, as best as possible, in the same way.” Brunee and colleagues are deeply distressed by the erosion and even dismantling of the rule of law in several countries like the Philippines, Turkey, Hungary, Poland and Russia. And she notes backsliding in several western democracies.

A call to citizens to act

A newspaper editorial Brunnée co-wrote says “once law is abandoned for raw power, everyone is exposed. Threat is constant.”

While Canadians may think it cannot happen here, the article notes “the rule of law is not self-perpetuating. It must be defended, and not just by lawyers, but by all citizens who may one day need its shelter.”